It must be nice being on the left.  Anything that displease you is ....welll....racist, sexist, homophobic, Islamophobic, and somewhere, and soon I hope, someone will publish an official list of the Democrat "phobias", if for no other reason, I'm not sure I can keep track of them all.

If a conservative, a white, a Republican, etc. accuses a Democrat of wrong doing.....they're racists....and more.....

"Democratic politicians have repeatedly argued that criticizing a Democrat's behavior just isn't something a normal, kindhearted person would ever do. Their critics, by definition, are exclusively composed of racists, sexists, homophobes, xenophobes, white supremacists, and other bigots. The journalists who report on these criticisms are just as evil, Democrats agree".

Well, that settles it....Democrats agree!  How could anyone find fault with that?

It's the same with crime reports. MSNBC's Joy Reid complains about Gabby Petito media coverage, calls it 'missing white woman syndrome'.  Her complaint is this story gets "national media attention only because she was a young white woman."  Really? Must be true, Joy Reid, considered a blatant racist, who has an audience of a kindergarten class, in size and mentality,  said it's so.   How can anyone find fault with that?  Is that reasonable?  Well, does it matter since "reason" is now racist, along with a host of things normal people think or as positive qualities, all of which are now signs of "white supremacy".

It’s finally come to this: according to “progressives,” Reason is “racist” Sanity and logic, too.

All are "patriarchal, and a disgusting vestige of WHITE SUPREMACY!!"  How could any rational person disagree with that?  Right?  Well, maybe we need to start disagreeing and calling things as they are.  Perhaps we need to start actually using reason, logic, discipline, etc, and redefine all this for what it is,  Anti-White Racism:
As any student of George Orwell knows, no authoritarian government can ever gain complete control unless it commandeers people’s thinking through the manipulation of language. Thus, the dystopian powers in “1984” deliberately turned the meaning of words upside-down in a process known as double-think. The same process is happening today with the words used to discuss racism.  In true Orwellian fashion, Ibram X. Kendi (pictured) insists that the only way to fight racism is to embrace racial discrimination in perpetuity. This “anti-racism,” as he calls it, is as likely to stamp out genuine racism as Orwell’s Ministry of Truth was apt to stamp out falsehoods. 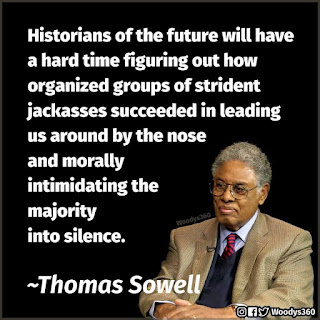 Well, it's been my view Thomas Sowell is one of the finest minds in the world today, and maybe it's time the rest of us took Thomas Sowell's advice and follow the example of this Virginia Republican who goes off on Democrats in this EPIC rant: ‘Enough!’

Email ThisBlogThis!Share to TwitterShare to FacebookShare to Pinterest
Labels: All Things Great and Small Are Racist, My Commentary