I posted this cartoon because it fits in with theme of Daniel's articles today, which is pretty much a regular observation on his part.  And that is the left's ability to take that which is obvious and clear to most casual observer and then turn it into incomprehensible fog, is absolutely astounding.   George Orwell would have been thoroughly impressed with his prescient books, Animal Farm and 1984, which is now under attack to be censored.  Remarkable! 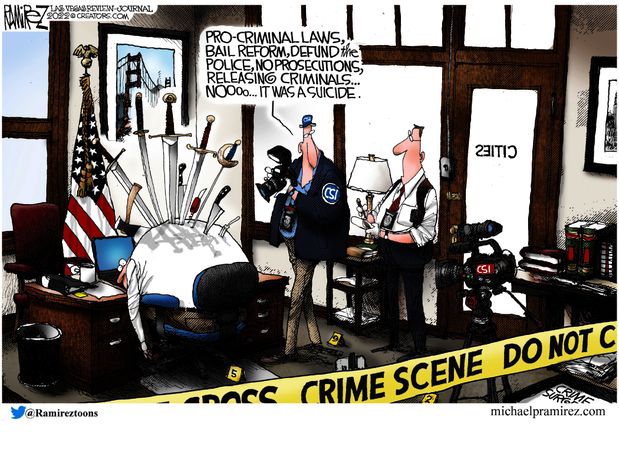 After the Hamas, kidnapping and murder of three Israeli Jewish teens, resulting in Israeli forces aggressively pursuing the Islamic terrorist group over the horrifying atrocity, Tema Smith retweeted and praised an article titled, "There Are No Good Guys In The Gaza-Israel Conflict". The article, among other things, claimed that, "Hamas — and the Palestinians as a whole — have desperately real and legitimate grievances against Israel." She also retweeted another piece urging Jews to, “repent for Gaza’s dead.”

“Here’s the thing: Jews *have* to be ok with Palestinians *explaining* why some turn to terrorism,” Tema Smith insisted two years ago.......Now, the ADL has chosen Tema Smith as its Director of Jewish Outreach. As a Jewish activist on Twitter quipped, “Whom do the Jews hire as Director of Outreach to the ADL?.............The ADL’s idea of “Jewish Outreach” is an identity politics hire who spends her time castigating Jews for opposing critical race theory and intersectionality because of its inherent antisemitism...........9 comments

Denying Islamic terrorism is the real delusion.  There's hardly a Muslim terrorist attack committed by a single perpetrator in Europe or America in the last five years that the authorities and the media haven't tried to spin as mental illness.  Both Ahmad Al Aliwi Alissa, the Syrian Muslim mass killer who shot up a Boulder supermarket, and Faisal Akram, who took a Texas temple hostage to secure the release of 'Lady Al Qaeda', had their attacks blamed on mental illness.

But France continues to lead the world in whitewashing Muslim terrorism as mental illness. When Sarah Halimi, a 65-year-old Jewish kindergarten director, was murdered by her Muslim neighbor while shouting, "Allahu Akbar", the authorities gave her antisemitic killer a pass because his pot smoking had supposedly brought on a “psychotic” episode. The Halimi murder had strong echoes of the previous killing of a Jewish DJ by a Muslim killer where the expert shrink had insisted that "it is not an anti-Semitic act but an act of delirium............12 comments

My Take - Well, I do agree there's something seriously wrong with the minds of these terrorists, but their mental disorder is because they have actual mental disorders.  They're mental disorder is ideological, not insanity.  They believe in Islam.  The fact they do crazy things isn't because they're insane, it's because they believe in an insane religion that requires violent and murderous acts.  The delusion is in the belief that Islam is a religion.  It isn't.  Islam is a political criminal movement masquerading as a religion. Now as for the French, they're just nuts.

Majority of Dems and Nonwhites Want Biden to Consider All Court Candidates, Not Just Black Women

Another reminder of just how out of step with the rest of the country the leftists running the party have become. "President Joe Biden's campaign trail vow to select a Black woman to fill a high-court vacancy without reviewing all potential candidates evokes a sharply negative reaction from voters...  just over three-quarters of Americans (76%) want Biden to consider "all possible nominees." Just 23% want him to automatically follow through on his history-making commitment that the White House seems keen on seeing through." 23%. Not even a quarter of the country supports this quota plan. And even a majority of Democrats oppose it............2 comments

I don't like Senator Lindsey Graham. Never have, never will. The reasons are too obvious for any conservative to even bother with. That said, there's usually a method to his madness, and while it's often self-serving, in this case what he's doing makes a certain amount of sense.............Note that Graham is emphasizing Childs. Not any of the other candidates.........2 comments

My Take - Let's face it, in spite of some "conservative" columnists who claimed Bryer was a good jurist, Breyer was a loser. He, Sotomayor and Kagan were lock step leftists, and the leftist narrative always took president over what the Constitution actually says.   When arguing a case before the court the only ones that counted were the other six, since depending on the case, you knew how these three losers were going to vote.  So, no matter how stupid and incompetent this next appointment may be, nothing will change, and if they pick the worst it might be all the better since it will expose just how intellectually corrupt these three are.

Are the Russians invading the Ukraine or the United States? Currently, it seems like a lot more of them have been crossing our border.   Maybe we could take a break from pondering where Russians will invade the Ukraine and ask why our government is failing to secure our border against the Russians and the entire world.

The migrants making their way to the border included more than 2,000 Russians and 300 Ukrainians. Most arrived or were discovered at a legal port of entry in San Diego, California, according to the data.

In mid-December, 18 Russian migrants were discovered in two vehicles that collided after a Border officer fired his gun to stop them from speeding through an inspection station at the San Diego port of entry, according to a release from Customs and Border Protection.

The current data seems to suggest we've had 13,420 Russians show up in 2021. That's a marked increase which seems to have been concentrated around the summer and fall. But it's not just the Russians.........2 comments

Not only did Black Lives Matter racial nationalists wreck entire cities, enlist the support of the nation's corporations, and force them to fire anyone who disagreed with their hateful slogan, but the racial separatist movement was this close to gaining a cherished black nationalist goal of commanding its own police stations and government.

At the height of Seattle’s racial justice protests in 2020, then-Mayor Jenny Durkan’s administration drafted legislation to transfer the Police Department’s East Precinct building to a Black Lives Matter activist organization and researched relocating the station’s operations, newly released documents show.  That June, as cops lobbed tear gas from behind barricades, and protesters on the streets surrounding the precinct called for the Police Department to be defunded, Durkan’s office behind the scenes briefly contemplated handing over the multimillion dollar property that had become the focus of the demonstrations.

Dems insist that CHAZ/CHOP was a publicity stunt, but it apparently came very close to succeeding. ............0 comments

Posted by Rich Kozlovich at 8:05 AM