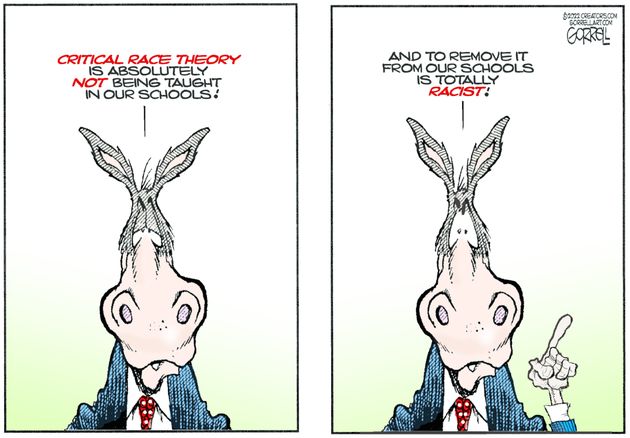 There's nothing in today's edition about Critical Race Theory, but I used this cartoon as an example of the failed and twisted logic of leftists, and it fits the articles listed below.  Make it race or Islam, the patterns of misdirection, logical fallacies and irrational narratives are all the same.

Think about this.  As we watch events unfold we have to wonder......What's wrong with these people?  We're supposed to accept the importation of a culture that's totally antithetical to every Judaic/Christian value that's foundational to western culture and especially America, and refusing to do that is "Islamophobic"! Are we insane?

A phobia is an irrational fear. Fearing Islam isn't irrational, it's justified, it's history and that history is incontestable, a 1400 history of hate, lust, greed, and violence.   And that includes all the various sects of Islam, who also have to fear Islam. Why? Because the sects of Islam consider all the other sects to be heretics, and the Koran requires heretics to be killed. So why is a fear of Islam irrational?  Why is it a phobia?   Fear of Islam and it's adherents is not a phobia, it's a rational reaction to a violent political movement masquerading as a religion.

CAIR Warns of Threat from Jews and 'ProntPage Magazine'

CAIR’s Islamophobia report shows why it’s accused of anti-Semitism.  A week before a Muslim terrorist attacked a Texas Temple in a bid to free CAIR’s favorite terrorist, Lady Al Qaeda aka Aafia Siddiqui, the hate group released another of its increasingly discredited “Islamophobia” reports seeking to cut off donations to Jewish and anti-terror groups. The reports, originally titled, ‘Fear Inc’, started out bad and have only gotten worse over the years. The 2021 report, ‘Islamophobia in the Mainstream’, is a cynical campaign to smear pro-Israel groups like EMET, CAMERA, and MEMRI for calling out CAIR’s anti-Semitism.............6 comments

It's a lot easier to speed up the vetting process when you're not actually vetting the incoming terrorists and rapists, just running the spelling of their current names on their current documents through a database to see if anything pops up. Since America's a bit short of terrorists these days, Biden intends to speed up the process of dumping unvetted terrorists into southern states and Texas in the hope that they'll all vote a dozen times for him in between suicide bombings.

Biden's advisers are crafting a plan to accelerate bringing potentially thousands of Afghans to the U.S. from Qatar, according to a source with direct knowledge of the administration's internal deliberations on the subject.

This should not be confused with the other Afghan sexual abuse of an underage minor at Fort McCoy which involved underage boys.

The indictment specifically alleges that Noori touched the genitalia of one of his victims on three separate occasions while at Fort McCoy, an Army installation located approximately 100 miles northwest of Madison. One of the alleged assaults occurred in a barrack, while the other two took place in a bathroom.

Is Putin Trying to Save Biden?

No he can't. Not really. But Biden is in a bad place on domestic policy. And the Ukraine crisis provides at least some hope for a win. The formula is simple. Putin makes moves on the Ukraine and Biden plays the hero riding to the rescue. The more the media blows it up, the more it will look like a win when no invasion takes place. Putin will get some concessions from the Ukraine, after enough pressure from the White House, and Biden will get a win. Or what looks like a win..............12 comments

Pelosi Announces Plan to Protect Democracy by Staying Forever in Congress
When you've gotta protect democracy, you've gotta protect it.  Pelosi has spent pretty much her entire life in politics. Her father was a congressman. She interned for a senator and then spent the rest of her life climbing the ladder.  At the age of 81, she's just getting started.  Pelosi's video trots out the familiar old, "our democracy is at risk because of the assault on the truth" gibberish and then claims that "nothing less is at stake than our democracy... that is why I am running for re-election to Congress."  Nothing says democracy like an oligarchy composed of professional politicians who never leave public office and cultivate massive donors as their power base in order to wield control over the nation..........
2 comments
My Take - This may seem strange, but I'm glad at her desperate attempt to cling to power, after all, that's the only moral foundation everyone on the left adheres to.  In her case:
San Jose Wants to Require Liability Insurance for Constitutional Rights

San Jose is moving forward with the latest California gimmick for wiping out the Second Amendment.   This plan involves requiring gun owners to carry "liability insurance".  Mayor Sam Liccardo claims that guns are responsible for $442 million in costs. Except that those costs are largely inflicted by criminals. And, shockingly enough, gang members doing drive bys are not going to take out liability insurance, nor would any insurance pay out in the event that their holder shoots a 6-month-old baby while fighting over who gets to sell drugs on a street corner.  That makes the pretext for San Jose's 'constitutional tax' farcial and illegal. And it comes after California cities and legislative leaders in particular have continued searching for various gimmicks for eliminating the 2nd Amendment of the Bill of Rights.  Taxes and assorted financial penalties have topped the list.......7 comments

Hollywood Wokeness Is Becoming a Parody of Itself

If only someone in the industry had the guts to actually give this garbage the ridicule it deserves........If we're playing by any kind of consistent rules, we should be casting someone with pure German blood. That would be pretty Nazi-ish, but that's the current insane state of the industry in which there are racial quotas and objections to the depiction of dwarves. ........7 comments

Democrats, as I mentioned in the previous post, wielded massive emergency COVID powers with devastating results to people's livelihoods, lives, and freedoms. Now that the public is getting tired of the emergency, they're admitting that they're doing it all for the polls........The "political vectors".......5 comments

No state and governor became quite as notorious for the abuse of emergency powers, the totalitarian posturing, and the judicial deference shown to its own little Mussolini than Cuomo and New York. Cuomo got away with everything, murder, religious discrimination, and constant lies, and the machinery of government under him boasted unlimited powers to terrorize the public with less accountability than a midtown jaywalker. The judicial ruling striking down Gov Hochul, his successor's mask mandate, on account that it was based around powers that have to be legislated, rather than ordered. It's a warning that the era of COVID emergency powers is passing............ 2 comments

Posted by Rich Kozlovich at 8:24 AM