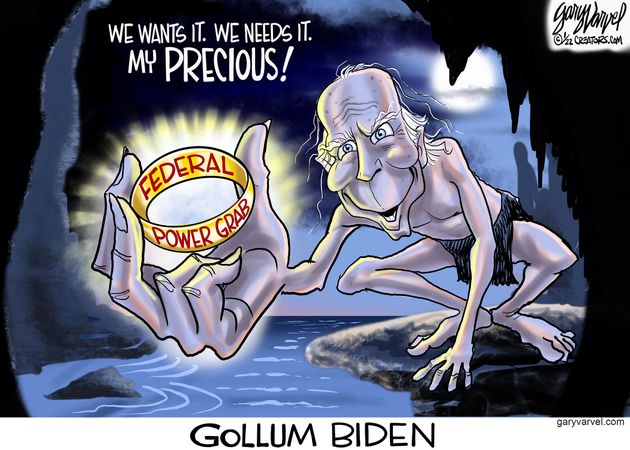 It's not about "Our Democracy".

Let's try to stop being delusional, just for a little while, or at least just once and grasp what should be obvious to the most casual observer:  Nothing we're seeing in the legacy media, or from the Democrat party about vaccinations, masks, mandates in general, the filibuster, voting rights, spending or anything else they blabber about it isn't about saving "Our Democracy".  It's about preserving their power to preserve "Their Democracy", that would destroy "Our Republic".

It's all about the only moral foundation the Democrat party believes in.  Do whatever it takes to get and hold on to power, preferably unfettered power.

Here are today's offerings by Daniel Greenfield.  Read, enjoy, and start walking down the path to understanding, and it begins by defining things properly.

The original message by the Blackburn Muslim Community on the Muslim terrorist who took a Reform Temple hostage in Texas read as follows.

"Faisal Akram has sadly departed from this temporary world and returned to his Creator. He was the son of Mohammed Malik Akram and the brother of Gulbar, Malik, Nasar, Yassar and Late Gulzameer Akram. May the Almighty forgive all his sins and bless him with the highest ranks of Paradise. May Allah give strength and patience to his loved ones in dealing with their loss. There are many stories circulating in the local community so please avoid taking part in the sin of backbiting. Let the authorities complete their investigations, have respect for the family and allow them to mourn peacefully. (Please check out the brother's statement in the comments section)."

The message was widely circulated and mentioned in many articles, including mine about the Blackburn background of the terrorist............6 comments

Democrats Must Refuse to Use the Jim Crow Filibuster

If a Democrat makes use of the Jim Crow filibuster, he should be known as a Jim Crow Democrat.   "Dr. King knew the Jim Crow filibuster was a barrier to progress & justice, and that remains true today," Rep. Ayanna Pressley tweeted. "To honor his legacy and claim our place on the right side of history, we must abolish the filibuster."  If this is true, and we must assume that Pressley believes it to be so, she and all Democrats should immediately commit to refusing to make use of the filibuster under any circumstances.

Otherwise they might be kicked out of the Right Side of History Bar & Grill.

It is shameful that over 50 years after Martin Luther King Jr. was assassinated by a supporter of Alabama Democrat Governor George Wallace some Democrats still continue to utilize the filibuster. Now that the Democrats have officially denounced the filibuster as the work of Jim Crow (even though it actually originated with anti-slavery Whigs like Henry Clay attacking pro-slavery Jacksonians), it’s time for them to live up to their standards and reject the filibuster.............7 comments

While Democrats go after dead Confederate generals, we ought to look at living Soros generals. The United States has Soros prosecutors who have turned our cities into violent hellholes where criminals run loose, Soros politicians who wage war on this nation from the ramparts of their offices, and Soros generals who advocate for political purges of the nation’s military.

Recently the Washington Post ran an op-ed from three retired generals, Antonio Taguba, an immigrant who had accused America of war crimes during the fight against Islamic terrorists in Iraq, Steven Anderson, a board member of the left-wing VoteVets, and Paul Eaton, a senior VoteVets adviser, urging that the military prepare for a "2024 insurrection" in proper Soviet style.

The three left-wing ex-generals called for "intensive intelligence work" to "identify, isolate and remove potential mutineers" and "guard against efforts by propagandists." A Commie commissar couldn’t have said it any better than Taguba, Anderson, and Eaton................ 49 comments