And it's only been one year! Imagine that!  Now, imagine what two years will look like.  The nation is fast running into what Victor Davis Hanson calls a systems failure.  The Biden cabal is refusing to obey the law let alone enforce that law.  The maniacs are the heroes and the hero's are the maniacs in this administration, and Biden is making sure the maniacs are in charge.  Immigration is out of control, inflation is rising, energy costs are going up, all of which is going to get much worse in 2022.  Foreign policy is in shambles with no coherent thinking, the military, FBI and the Justice Department are now totally politicized and out of control.  What could possibly go wrong? 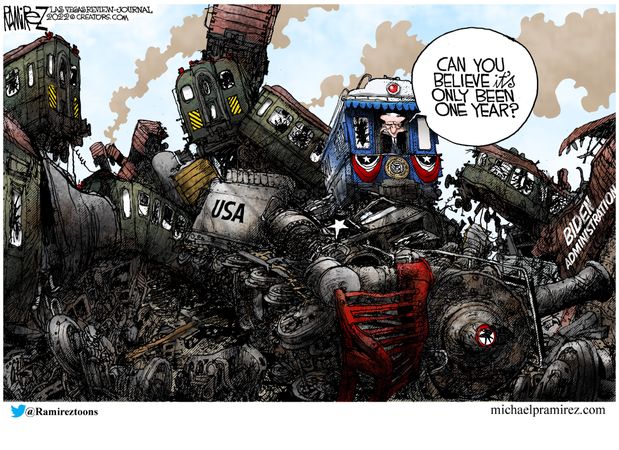 Soros DAs don't just spend all of their time refusing to prosecute ordinary criminals. Give them a higher status and they'll show you how they can undermine America. You may remember this guy.............Biden however nominated and put into place one of the worst Soros DAs in the nation...............Communist China approves.............1 comment

Texas Temple Terrorist Tablighi Jamaat Connection Confirmed
My first response after the Colleyville terrorist hostage crisis was to do background and note what Faisal Akram's hometown of Blackburn was famous for............Now, the Jewish Chronicle, which has taken the lead on reporting on this story, has confirmed the Tablighi Jamaat connection.............
California Gov. Newsom Shocked to Discover He Turned State Into a Third World Hellhole
Sometimes you wonder about the mentality of liberal elites who turn cities and states into hellholes and then seem surprised by it. After two years, Governor Newsom popped his head out of the French Laundry and is shocked to discover that legalizing theft and freeing criminals somehow turned the state into a third-world hellhole. .............1 comment
The Media Doesn't Stop Lying, It Doubles Down On Its Lies
NPR claimed that Sotomayor was forced to work remotely because Gorsuch wouldn't wear a mask despite Chief Justice Roberts asking everyone to wear masks. In an extraordinary move, Roberts, Gorsuch, and Sotomayor have all denied the story. This hasn't even slowed down NPR which is in a conflict over how hard to sneer its way past it. This Daily Beast headline ought to clarify the execrable arrogance in play here, "NPR ‘Founding Mother’ Unloads on Public Editor Over SCOTUS Story: 'She's Not Clarifying Anything!'" Fake, but accurate. In an accurate, but fake sidebar, the media managed to turn an innocuous Mitch McConnell quote into a racial slur.........
Biden Frees Gitmo Terrorist Linked to Chanukah Murder of Israeli Children

He “can quote Mohandas Gandhi and Dr. Martin Luther King like teenagers quote Taylor Swift.”   On Chanukah 2002, four Hercules planes bearing hundreds of people evacuated from Africa landed in Israel. The passengers included Israeli families who had been vacationing in Kenya, some alive, some wounded, and some children returning to their homeland in small coffins. Now, Biden has decided to release Mohammed Abdul Malik Bajabu, an Islamic terrorist who, “participated in the planning and execution of the terrorist attacks”, from Guantanamo Bay..

2002 had been a bad year in Israel. 457 Israelis were murdered by terrorists in one of the worst years of the Islamic campaign of genocide against the country’s indigenous Jewish population. By the time fall came around, families in a terrorized nation were looking to get away from a year of suicide bombings, shootings, and brutal atrocities. Families, many working class, scrimped and saved to be able to afford a Chanukah trip somewhere safe out of the country..............3 comments

Waking Up After a Trump Derangement Syndrome Overdose

What do you do when there’s no one left to hate?  Over the span of four years, the Democrats constructed one of the greatest cultural monuments to hate in this nation’s history. It is difficult to measure the sheer number of hours that CNN and MSNBC dedicated to Trump conspiracy theories, the gigs of podcasts, the millions of ad dollars, and the total extent to which their entire narrative circulated around hating one single man.

This cult of anti-personality unified the party, enabling its radicals to adopt policies that were as insane as they were incomprehensible, from police defunding to critical race theory to lockdowns, and the elevation of two politicians, Joe Biden and Kamala Harris, who are short on palatable personalities, riding on the coattails of a program to militarize the capital, federalize elections, pack the Supreme Court, add two states, and usher in a virtual dictatorship.

There was only one problem with their plan: President Trump was no longer in the White House.............14 comments

History is written by the winners, they say. But the question of who won the Cold War is somewhat of a split decision.  Geopolitically and economically, the western coalition of conservatives and liberals held the day. Culturally, especially at the academic level, the hard Left, much of which was sympathetic to the Communist cause continued to dominate cultural institutions.

This comes into play in many ways, but the most obvious are the ways in the differing treatments of the Soviet Union and Nazi Germany, and the erasure of the atrocities of the former, especially when it comes to the complicity of western leftists in committing them.

I was recently informed by Jillian Becker about the inexcusable loss of her invaluable work with the Institute for the Study of Terrorism...........10 comments

Posted by Rich Kozlovich at 7:53 AM