It stuns me at things people think and say.   "Journalists" lie, deliberately and viciously.  Academics corrupt facts and history to fit their  identitarian politics.   Of course there are the politicians whose unabashed hypocrisy is remarkable.  Then there are the celebrities, many of whom have been amazingly successful, became famously rich and spout leftist nonsense.  Does it ever occur to them if this was the socialist society they're promoting, they might not be either.   Can you name one world famous and fabulously wealthy actor in Venezuela?

It comes back to this.  To promote all this radical identitarian leftist nonsense they spout requires twisting there minds into irrational shapes in order to ignore something that should be obvious to the most casual observer, an overwhelming and patently obvious fact...............Their hypocritical stupidity is astonishing.

Enjoy Daniel's offerings and observations in today's edition of P&D. 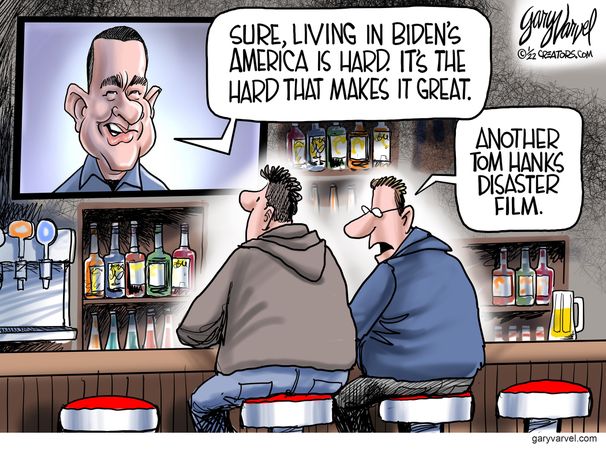 Sanctions vs. Soldiers in the Ukraine

Democrat administrations bet very hard on sanctions as the ultimate tool of the international world order.  Sanctions are not a very good tool. It's hard to find any particularly effective examples of sanctions working to change behavior or prevent a war. The only thing sanctions are any good for is limiting the scope of the damage that a smaller country can do, but even there it's often a mixed bag. Even when the sanctions are effective, like those that FDR imposed on Japan, the response wasn't peace, but war.  ...............17 comments

My Take - Normally I'm in complete harmony with Daniel, but in this case I have to depart and ask, what's the alternative?

If journalism had any credibility left, the likes of Michael Wolff and Jane Mayer would have killed it a while back. Mayer reached her low in the New Yorker trying to smear Justice Kavanaugh with a sexual harassment claim from Deborah Ramirez and then pivoted to smear Franken's accusers to protect the leftist Senate creep. The Ramirez smear fell apart on even the most casual inspection.  Now Mayer is back with a shocking New Yorker expose that reveals that... Justice Clarence Thomas' wife Ginni is a conservative activist.............4 comments

My Take - Judge Thomas has been, in my opinion, the most unbiased and most intellectually successful justices to sit on the Supreme Court in my lifetime, and I'm 75.  And this piece of information, while meant to defame him, makes him look better and better.  Why?  His choice of spouse shows good thinking.

The stakes in Palin v. New York Times are pretty clear.  The New York Times shamelessly and blatantly lied in once again falsely accusing Sarah Palin of having anything to do with the Arizona shooting by a mentally ill man that killed a Federal judge and wounded former Rep. Giffords.   In doing so it repeated a smear campaign against Palin that was based on nothing more than the fact that Palin had campaigned to encourage political challengers to Giffords.   Everyone knew this. By 2017, there was zero ambiguity on the subject. It was, for that matter, never seriously in dispute............. 5 comments

Supreme Court May Decide If Harvard Can Discriminate Against Asians

My Take - Can we guess the vote count?  If they actually followed the law this would be a 9/0 decision against these universities.  But I think this will come down to a 5/4 decision with Roberts being the swing vote.  How will he vote?  Given his record, there's an excellent chance he will side with the leftists, but we'll see.

How do you make money in the Biden economy? You could...

Biden has filled his administration with lobbyists and lobbying firms are seeing a great year as everyone tries to get through the door at once...............4 comments

Sex and Blasphemy in Pakistan

What’s behind all the blasphemy accusations? Sex.   In Pakistan, Aneeqa Ateeq, a 26-year-old woman, has been sentenced to be "hanged by her neck till she is dead" over a “blasphemous” WhatsApp status. The death sentence for the woman was apparently brought on by “hand-drawn” cartoons of Mohammed and Aisha.  Mohammed infamously “married” Aisha when she was only six years old. The precise age at which he then raped her is the subject of some debate among Muslim clerics, but is generally localized at an age that would have seen Mohammed serving decades in an American prison.

The Pakistani judicial system, which is based around the brutal codes of Islamic sharia law, refused to specify any more details about the cartoons except that they involved "derogatory, disgraceful, immoral filthy comments/remarks/representations in respect of the sacred name" of Mohammed and Aisha. Or as sacred as an aging serial rapist assaulting a little girl can be.