Is the Church of Wokeness going to self-destruct?  Well, that fact is, time is not n their side.   This cartoon says it all.  It who they are, it's what they believe, it's what they'll promote and push on America and the world, and its' doomed to failure.  That's history and that history is incontestable.

No leftist government has ever been successful.  No leftist ever says, "I'm sorry, I was wrong, it's my fault".  That means someone else has to be blamed for their failures, and as time goes by these nitwits will start to turn on each other.  We're already seeing that between Kamala Harris and the Biden administration - and as in an article listed below - it's happening at the DNC.  But I have no doubt, this is just the tip of the iceberg.

This idea they can blame Trump forever and get away with it just won't float because why?   "They are in charge".  They'll start looking at the members of their own cabal to blame.  And when that happens it gets nasty because leftists have no solid moral foundation and since there are no boundaries on the left, there will be no lengths to which they will go to divert the blame for their failures on others.  But it will become obvious who's to blame and the public won't be fooled, at least as long as there's an alternative media to challenge the propaganda from the "legacy" media, AKA, America's Pravda, the "propaganda machine" of leftists and the Democrat party.

Truth, facts, justice, consistency of thought, history and the American Way are anathema to the left.   Please, let's try and get that.....just once! 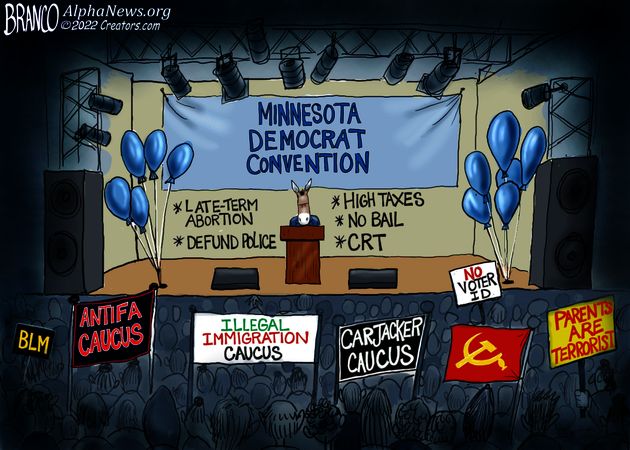 Money alone doesn't buy elections, but combine vastly superior spending power with total media dominance, a smart campaign to rig elections in key states that went back years, and a whole bunch of operatives and organizations tasked with coming up with new tricks, and it can seal the deal. How much did the Dem dark money machine buy in 2020? We're just beginning to get a sense. But a lot of money was pumped into 2020..............2 comments

Biden Should Nominate Janice Rogers Brown to the Supreme Court

Biden has announced that he will nominate a black woman to the Supreme Court. If he really wants to remedy a historical injustice though, he will nominate Janice Rogers Brown to the Supreme Court.  I've written in the past about how aggressively Democrats blocked her nomination.  Born in segregated Alabama, Janice Rogers Brown was the daughter of sharecroppers. Democrats, including Biden and Obama, blocked her nomination because she was opposed to slavery.

“In the heyday of liberal democracy, all roads lead to slavery. And we no longer find slavery abhorrent. We embrace it. We demand more. Big government is not just the opiate of the masses. It is the opiate – the drug of choice – for multinational corporations and single moms, for regulated industries and rugged Midwestern farmers and militant senior citizens," Brown believed.

Biden filibustered and voted against her nomination. It would be an act of historical justice to nominate her.  It goes without saying that won't happen, but it's also the only just answer to his original misconduct. .............  4 comments

How many ways can you have it? This is politics, not Burger King. So you can pick someone because they're of a particular race, but then denying that you picked them because of their race is even more confusing than those Burger King ads in which a creepy plastic-faced mascot wanders the streets threatening people into buying bad burgers.........Sure. Biden's promise to pick a black woman in no way means that's affirmative action because............ look a squirrel! ............The only decision Biden made was to pick a candidate based on her race..........3 comments

DNC Chair and Biden in Circular Firing Squad Before Midterms

The Left burned some $110 million in a failed effort to help Jaime Harrison oust Lindsey Graham. If you've watched any cable news lately, you know how that worked out. As a consolation prize, Jaime Harrison got to chair the DNC since that's the reward for blowing an expensive election. In reality, Jaime Harrison got the job because he was another Clyburn ally and Biden is deep in hock to Clyburn for his position.  After getting the job last year, there's leaking that he wants out ahead of the expected catastrophic 2022 midterms.........And he's not actually doing his job at the DNC............But the bigger story here is that the circular firing squad is alive and well........1 comment

Muslim converts tend to be far more fanatical, but the strange element to this story is that we haven't heard her name before.

Fluke-Ekren appears to have converted to Islam at least as far back as 2004 since a news story from that year appears to show her wearing a hijab.  Photos from a blog apparently showcasing her unfortunate kids show little girls being forced to wear hijabs. The kids have Turkish names inflicted on them so it seems likely that she married a Turkish Muslim man and went all the way...........After her original husband's death, she was passed around ISIS fighters, marrying one after another, now she's back to face justice. This is, to put it bluntly, another tragedy caused by Islamic immigration into the United States. And another reminder of how much harm the "international students" and "workers" that universities and companies demand be allowed to come to America do to us.............. 2 comments

Posted by Rich Kozlovich at 9:55 AM