Today's offerings deal with a number to trenches, but this cartoon I think is representative of what Daniel is saying.  Biden is a consequence that will resonate for  years to come, just like Jimmy Carter and Richard Nixon.  Obama merely laid the ground work.  By comparison (and I'm going to break out in hives for saying this) Clinton was a competent President. 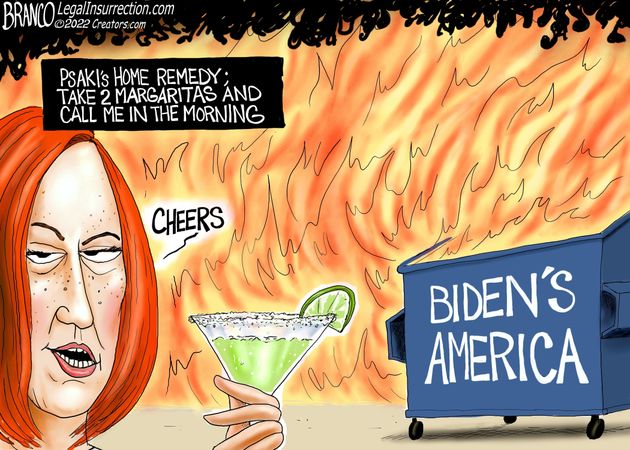 Justice Breyer, Like Everyone Else, Decided Biden Was Going to Lose

After Ruth Bader Ginsburg lost lefties a seat by refusing to retire, what were the odds that Justice Breyer would stick it out? A pressure campaign earlier by lefties didn't succeed in getting Breyer to step down. If anything, it seemed to have hardened his resistance, and he began emphasizing the Court as an apolitical institution.  Was that going to last?  Now Justice Breyer, like everyone else, expects Biden to lose and will step down.......... the odds are that the new justice will be more radical than Breyer. The question is whether the GOP will take this opportunity to challenge a radical nominee or give her a pass.............. 13 comments

It's Jersey. What more is there to say.  Jersey Democrat politics, like Philly politics, are one step above and sometimes one step below the mob. But watering down the distinction between political consultants and hitmen is really something even for Jersey.............. 8 comments

Equity in Medicine is Racist and Lethal

Killing more minorities to kill more white people. February 1st is the Department of Health and Human Services deadline for public comments on bringing "equity" to organ donations. Equity invariably means racial quotas and artificially moving minorities to the head of the line and there’s no reason to expect anything else. The Association of Organ Procurement Organizations (AOPO), which had already been blamed for “organ transplant disparities”, has been constantly touting its own AOPO Diversity, Equity, and Inclusion Task Force and promising to implement its recommendations...............21 comments

Even After Court Ruling, Biden Admin is Killing 'Remain in Mexico' Anyway

There are two ways to kill a program. One is by overtly throwing it out the window and the other is by refusing to implement it. The Remain in Mexico policy was the most successful element of the Trump administration's immigration policy. It was so successful that Biden did his best to kill it. Remain in Mexico meant that migrants from around the world (and they were coming from around the world, including China and Pakistan) couldn't use Mexico as a gateway to enter America. That was good for both America and Mexico.  A court-ordered decision by a federal judge (I disagree with the decision on legal grounds, but it's essentially payback for federal judges deciding that DACA was binding on the Trump administration) forced the Biden administration to resume it.............. 0 comments

As I warned when it first happened, putting Kamala Harris in charge of addressing the "root causes" of migration in Latin America was a trojan horse for executing coups and bringing leftist and Marxist regimes to power. .................0 comments

Rep. Ilhan Omar keeps throwing a non-stop pity party for herself as the bigot who constantly claims to be the victim.   Omar is actually powerful and privileged and has risen to a position of power in the country she makes no secret of hating.  Meanwhile, Masih Alinejad is an actual dissident. Alinejad lives in exile and has been a courageous activist against the Islamist regime, encouraging protests, boycotts, and celebrating women who refuse to bow to mandatory hijabs. Her family members have been arrested and Iran's regime plotted to kidnap her................2 comments

Posted by Rich Kozlovich at 8:48 AM