I originally published this on February 27, 2018, but I think this is just as profound today as it was then.  If you replace Kasich with Liz Chaney, Lisa Murkowski, Mitt Romney, George Will, Jonah Goldberg, and any number of others who profess to be conservatives, this still applies.

I didn't change this from Kasich to someone else, and I didn't restructure this to keep Kasich out of it, or restructured to be a non specific because I really dislike Kasich.  I had the displeasure and misfortune of meeting him personally, and he's weird, he's rude and he's arrogant.  Any time he's presented in any other way he's faking it for the camera, and if you doubt that, please peruse my Kasich  file. 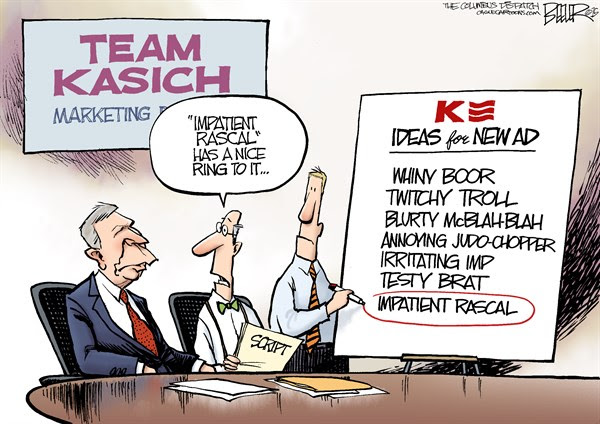 The author goes on to say:


“The pair will deliver speeches and participate in panels on March 21 in Los Angeles at an event for New Way California, a group formed by Assemblyman Chad Mayes (R-Yucca Valley)”


“They will be focused on reminding the Republican Party we need them to be successful, but in order to be successful, they need to choose policies and messaging that helps them grow rather than continue to shrink.”

According to the author Republican membership has been declining dramatically over the recent years and they believe the party -  and quotes another Schwarzenegger spokesman saying - the Republican party in California “should be positive and inclusive and expansive, as opposed to the narrow cast that it has been nationally, and in California particularly, for some time.”

He goes on to say:


“What has happened with tone and on immigration clearly over the last decade, longer, has put the party back, and now the party, by and large, is run by people who would rather be leaders in a phone booth and are not inclusive enough and not positive enough to win a statewide election.” And apparently both Kasich and Schwarzenegger have “concerns about that because what happens in California is a precursor to what happens nationally.”

Only this much illogical clabber could come out of a California politician. Before this I thought Pelosi was acting like a blithering idiot because she’s developing Alzheimer’s. I’m not so sure now. Maybe there’s something in the water that destroys the brain's synapses in California, otherwise I’m at a loss to explain how they think this is reality.

Their first concern, and make no mistake about this, their only concern, is wining. Not doing! Winning!  And in order to do that they want the Republican Party of California to become “inclusive, positive and expansive”.  What does that mean?   Because Democrats have turned California into an absolute mess.  And do they really think that's a good thing?  I know, I know, it wasn't that bad then, but even the most casual observer could have predicted California's suicidal self immolation.

So, perhaps we should ask:  Are the Republicans deliberately keeping people out of the party? Not that I can tell, unless you think actually having values and sticking to them is a deliberate ploy to keep membership low, rather than a strong moral stand on a broad front of issues.

Do the Republicans have a positive message? I think their message is certainly more positive than the Democrats who make every issue and end of the world scenario, every area of policy disagreement an act of racism. Wasn’t it Nancy who declared the tax cut was Armageddon?

So, letting taxpayers keep more of their hard-earned money instead of wasting it on government bureaucracies is negative, but taking more and more of their money and growing government beyond sustainability and competence - thereby wasting literally trillions - is positive.

Did I get that right? Did I miss something?

Why is it these appeasers always find conservatives to be negative and the left positive when history has shown the left has been as disaster wherever they've imposed their positions on a nation?

As for being expansive - what does that really mean? According to the dictionary it means: covering a wide area in terms of space or scope; extensive or wide-ranging, "deep, expansive canyons", extensive, sweeping, rolling expansive grassland wide-ranging, extensive, broad, wide, comprehensive, thorough, full-scale (of a person or their manner) open, demonstrative, and communicative.

Okay, but what does that mean in politics?  Apparently these RINO's want a “comprehensive, thorough, full-scale (of a person or their manner) open, demonstrative, and communicative.” In short – never say or do anything that will offend or defy leftists or their positions, and become Democrats in every way except don’t change the Republican party name.

And they think that’s a winning strategy?  If there ever was a losing concept – that’s it!

When Harry Truman was running for his own term as President he was criticized by his party for not running more like a Republican.  He said:

Well the converse is also true, and in California – voting for a real Democrat versus a mimic Democrat that’s an automatic. The Democrats may not have values any conservative appreciates, but those are their values. If the Republican abandons traditional values what values do they actually have? If they have no values, why support them?

There's a reason why California is losing population in droves, but these are the values and positions Kasich and Schwarzenegger want the party of adopt instead of fighting the good fight to save California from becoming another leftist disaster.

Note:  As I said this was published in 2018 but change the names and it still all applies. RK

When I was in Washington a few years ago a speaker from one of the popular news show called Ohio the “center of the political universe”. And in Ohio - Kasich is toast. The Republican Party in Ohio is done with him and he’s term limited, meaning as a lame duck governor – he’s in a body cast. I’ve met him and I can honestly say he suffers from a serious case of weird compounded by a massive infection of hubris.

He’s clearly wanting to be President of the United States and I keep wondering why? Does he want the nation to become California and finish the work Obama started?   Does he like the idea California refuses to enforce federal immigration laws? Does he like the idea a Mayor of a Oakland has violated federal law by illegally warning illegals of potential arrests? Does he want the nation to bring back Obamacare? If that’s a part of his package and strategy – he’s toast right out of the starting gate.

It’s been clear to me he desperately wants to be President of the United States, and somehow thinks he can run in 2020 and get elected. The real question we should be asking is this: When will he change parties - before or after the 2018 election?

We already know from Kasich's positions on the Medicaid expansion Kasich is a liar and a heretic.  Will being a heretic make it easier for him to abandon his position on abortion, because once you become a Democrat, you must be a pro-abortionist or you’re toast there also.  However, if he does change parties - he should take the Governator with him.  No one will care, including the Democrat party.

Posted by Rich Kozlovich at 8:53 AM