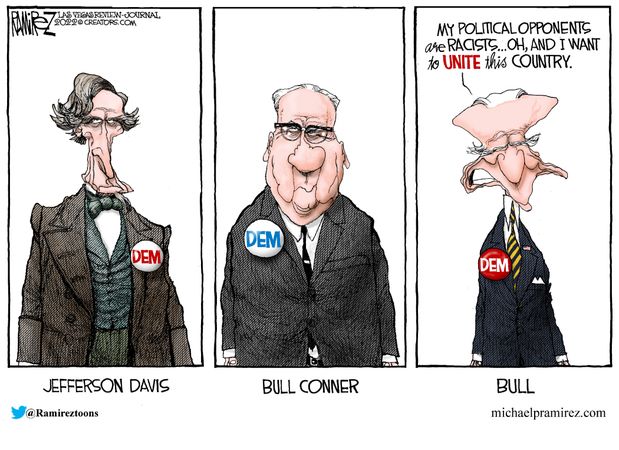 When reading the "news" one has to wonder if these people actually believe what they're saying. End the filibuster scenario is one such example.  While decrying it, and demanding it be abolished, the very ones demanding it...... used it to prevent a bill offered by Ted Cruz.  Remarkable!

Or rather it's shielding whites in the same way that it shields blacks. The underlying problem is that lefties argue that some kinds of racism are justifiable and a good thing, and either deny that they're racism (insisting instead on the weasel term, reverse racism) or or claim that their racism is a vital part of education, critical race theory, or workplace equity. And even formerly semi-credible wire services like the AP now sound like Gawker posts and TikTok videos................2 comments

The TSA Will Strip You Naked, But Says Illegals Can Use Arrest Warrants as ID

In a lawless society, laws only apply to the law-abiding.  That's the paradox of our modern lawless society which is beset with laws, but in which the lawless population of homeless, criminals, and illegals who are part of the Dem client base, can steal, attack, and do whatever they want without having to follow any of the laws.  Jennie Taer has learned of an absolutely insane TSA guideline that only reinforces this double standard. While normal people have to take off their shoes and pay premium prices for things like Clear just to avoid harassment, illegal aliens can literally fly with their arrest warrants................ 2 comments

Biden Against Israel Pipeline to Europe, Fine With Putin's Pipeline
As I wrote in today's article,"to play by their rules, Vladimir has tapes of them with micturating prostitutes in a Moscow hotel room." After four years of "what does Putin have on him" and "how would this administration be any different if Putin were calling the shots", the party responsible for all that treasonous garbage seems to be doing everything possible to help Moscow while screaming America and our allies...............10 comments
NPR's Story About Sotomayor, Gorsuch and Masks Was Fake News

Anything connecting masks and Republicans is instant COVID clickbait and when NPR put out this story, lefties gobbled it up like hotcakes............Less discreet outlets like Rolling Stone spun it up into, "Report: Neil Gorsuch Stands Up for His Right to Endanger Sonia Sotomayor’s Health." Except that it was all a bunch of lies. According to Sotomayor in a joint statement with Gorsuch.........7 comments

No Big Invasions, Please: Biden Okay With Russian "Minor Incursion"
The usual outcry of "dementia" and "senility" has gone up already. And I would be the last to rule anything out, but even a brief overview of Biden's career would show that he's been doing this sort of thing for a long time. He's been acting like this in the Senate and the Obama White House. Whatever else he's got, this is who Biden is. He thinks that he's very smart and that he's cutting to the chase.  In reality, he's making a huge mess and embarrassing the United States..........
2 comments
Texas Temple Terrorist Wanted to Serve as Model for UK Muslims Attacking U.S.
A few days ago when I was on Brannon Howse's show on Frank Speech, I predicted that the Texas Temple terrorist intended to serve as a model for future terrorist attacks against America by Muslims in Europe.  Now the leaked audio published by the Jewish Chronicle shows that's indeed the case............
1 comment

Call this another of a myriad of data points that forms a map of a decadent culture............It's not just music. Much of Hollywood, television and movies (and with the dominance of streaming, the difference between the two is becoming less and less) is just about recycling existing intellectual properties, often by using wokeness to make it seem new, remaking a classic series like The Wonder Years with a black cast, but that does little to disguise the underlying creative bankruptcies. ........
3 comments
Posted by Rich Kozlovich at 10:03 AM