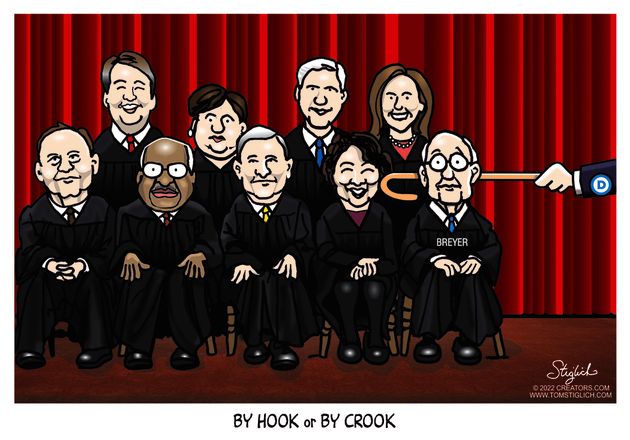 As this SCOTUS battle begins we're going to see the hypocrisy of the left in spades.  It seems clear Biden and his band of midwits are going to put forward a black woman who is bound to be so far left even Sotomayor may look like an intelligent conservative.

So, while Democrats have screamed about fairness and character for decades, when they're in power,  none of that matters.  It's all about pushing their agenda, qualifications notwithstanding.   It's now about race, gender and destroying the Constitution.

Breyer, in spite of contrary claims by allegedly conservative news sources, was a terrible justice.  He will be replaced with a justice that's not just terrible, but terrible and incompetent, just like all the other appointees of the Biden administration, and the media propaganda machine will go into a high gear as we've never seen it before.

If the Republicans can possibly stall this nomination until the 118 Congress is seated on January 3, 2023, and they've taken over the Senate.  That's not much of a hope, and when the dust settles, there will and incompetent far left wing justice who will be there infesting our judicial system for probably the next 30 years.

Who knows, he may actually convince Kamala Harris to resign as Vice President to become the next Justice of the Supreme Court.  Now, that's rich, she would then be the tie breaking vote to pick herself.

We need a 28 amendment to the Constitution to create term and age limits for the federal judiciary.

Biden's first term has become a complete disaster. He's underwater and losing support among most Dems. He's not about to reclaim national support, but he needs to at least build up support among the two groups that are the Dem base.  That means, and it's all but inevitable, that the nominee will be a black leftist woman. Biden already promised as much and these are the two groups that Biden needs to survive a Dem primary, where he's underwater, never mind a general election.  But Biden also needs to make the nomination look like a win, rather than being at the mercy of Breyer's decision to step down, and to amp up identity politics.................While Republicans should dig up and explore just how extreme her views are, don't expect that to stop the train. If Dale Ho can end up getting through, just about anyone can...... 12 comments

Yesterday I wrote a post titled, "The Supreme Court Nomination Debate Will Consist of Republicans Being Called Racists."  I got it in a few hours before the live show actually began. "Right-wing commentators spread hate — and hypocrisy — on Biden's upcoming Supreme Court pick," Media Matters for America shrieked. One blog went even better with, "THE SUPREME COURT NOMINEE IS A NI[CLANG]!"  At PJ Media, Matt Margolis satirically wrote, "Biden's Supreme Court Pick Sexually Assaulted Me 25 Years Ago."

"I can tell you right now, whoever Biden picks, they sexually assaulted me 25 years ago at a high school party."

These days, reality always beats satire over the head and leaves it bleeding in a ditch. That's why I hardly bother writing it anymore.  The real-world takeaway is accusing Republicans of racism against a nominee who hasn't even been picked yet........7 comments 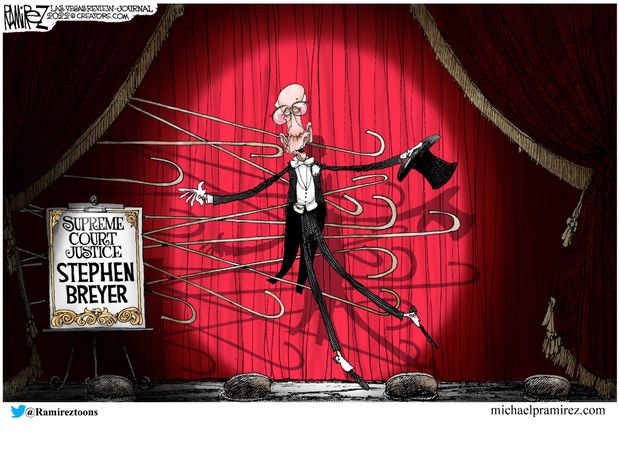 “We are now firmly in the window when past justices have announced their retirement, so it's officially worrisome that Justice Breyer has not said yet that he will step down. The only responsible choice for Justice Breyer is to immediately announce his retirement so President Biden can quickly nominate the first-ever Black woman Supreme Court justice,” said Brian Fallon, the executive director of Demand Justice and a former top aide to Schumer.

Demand Justice has hired a billboard truck to drive around the Supreme Court with the message: “Breyer, retire. It’s time for a Black woman Supreme Court justice. There’s no time to waste."

If conservatives had been doing this kind of thing, there would have been an FBI investigation and congressional hearings about an urgent threat to democracy. Since it was not just lefties, but radicals backed by the big lefty money machine, there was just awkwardness. Justice Breyer released a statement dismissing such efforts at pressuring him to resign.

Time to go hunting for some root causes.

"I'm touched by everyone who has reached out. Thankfully no one was harmed," Bush said Thursday in a statement on Twitter, linking to a local news report on the incident. "But any act of gun violence shakes your soul." Bush added, "That's why our movement is working to invest in our communities, eradicate the root causes of gun violence, and keep everyone safe."

Babies and children are being killed left and right because of police defunding and the criminal justice reform crime wave, but Bush feels her soul "shaken" because her car got hit by bullets............4 comments

My Take - Well, if we're really serious about seeking out root causes for violence, let's start with single parent families and the welfare state.  Once we've resolved that, maybe.....just maybe.....a lot of this will cease in a generation on it's own.   But it will now take a generation to fix it.  First we need to accept that's the real root for all of this, and as long as nitwits like Cori Bush are in positions of responsibility, nothing responsible will be done, except scream racism.

Posted by Rich Kozlovich at 8:43 AM