The Ongoing Horror of Cuban Socialism

Back in 2014, I compared the long-run economic performance of Cuba and Hong Kong.  Both jurisdictions were roughly equal about 60 years ago. But the data show a dramatic performance gap ever since the communists took power in Cuba, with Hong Kong (which was very pro-market back then) enjoying much bigger increases in prosperity.

Sadly, not much has changed in Cuba since I wrote that column. The communist dictatorship is still there, and the economy is still socialist (notwithstanding even Castro admitting its failure). And this means ongoing misery for ordinary people.  Here are some excerpts from a story published by Agence France-Presse.

Cubans are no strangers to queuing for everything from bread to toothpaste, often standing for hours under a blazing sun with no access to a toilet or drinking water, and always with the fear of leaving empty-handed. It is a daily ordeal Cubans have endured for about 60 years of communist rule… Cuba recorded an official inflation rate of 70 percent in 2021, when the economy recovered a modest two percent after an 11-percent drop in 2020, signaling the nation’s worst economic crisis in almost three decades. With government reserves dwindling, food imports — some $2 billion worth per year before the pandemic struck — had to be drastically cut back in the country of 11.2 million. …The shortages affect everyone; even the well-heeled have to contend with long lines, though they often pay other people to hold their place. …It is common for shops to have only two or three products at a given time, or none. Sometimes, people queue not knowing what, if any, product they will be able to buy that day.

Some defenders of Cuba blame the hardship on the United States, which imposes considerable restrictions on trade and tourism with Cuba.  I’m always happy when people recognize the downside of trade barriers, but blaming Cuba’s economic misery on the partial embargo is akin to a football team blaming its field goal kicker after getting shut out, 56-0.

Virtually all economists, including left-leaning ones, agree that bad Cuban economic policy is what’s causing deprivation and suffering. Mary Anastasia O’Grady opined on this issue in her Wall Street Journal column.

Repression and propaganda are the only two things that Havana does well. …For decades, Cuba has blamed what it calls the U.S. “blockade” for island privation. Regime talking points have been repeated ad nauseam in U.S. media and beyond. …Why life for most Cubans is primitive in the 21st century is not hard to discern. Shortages caused by communism have been made infinitely worse during the Covid-19 pandemic because, as tourism dollars dried up, the regime naturally diverted diminishing hard currency to itself. There is no gasoline or diesel for ambulances… Military vehicles and secret-police cars are always ready to go. Nurturing the island’s nomenklatura also takes real money, as does caring for the children of elite kleptocrats who display their obscene wealth—like car collections, thoroughbred horses and luxurious travel—on social media. …Havana is sore because it doesn’t qualify for credit from the U.S. But Cuba is a proven deadbeat, having defaulted on hundreds of millions of dollars in debt to Russia, Europe, Latin America and Japan. The despots are pouting too because they can’t stick their snouts in troughs at the International Monetary Fund and World Bank.

Let’s close by looking at some long-run economic trends.

I started this column by charting the difference between Cuba and Hong Kong. But since Hong Kong’s economic attractiveness is being eroded by China, let’s instead see how Cuba compares to a handful of other nations. 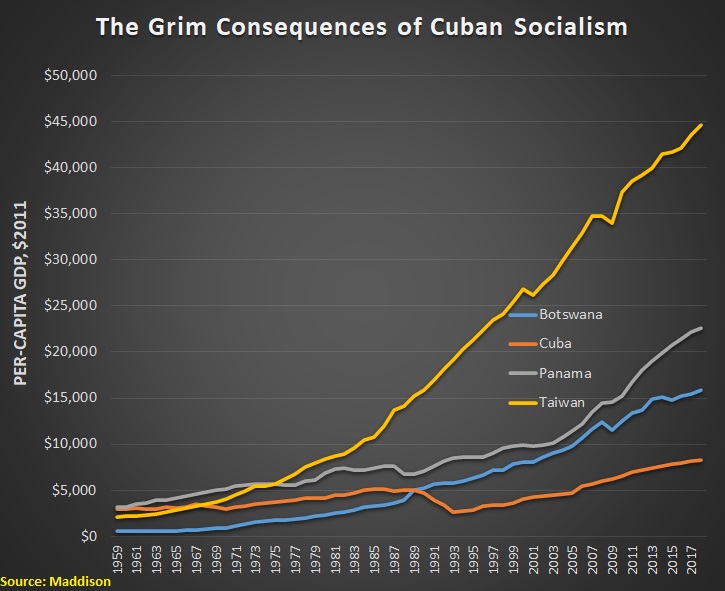 Which is the lesson of my anti-convergence club.

P.S. The AFP story from above included this hopeful sentence.

The government in Havana has said that boosting national production is the best way to deal with shortages and queues, and has slowly started opening the economy to private enterprise.

I certainly hope this is true, though I’m skeptical since previous promises economic liberalization have not been fulfilled (heck, they’ve even attracted mockery from late-night TV hosts).

P.P.S. Communism has always attracted dupes and apologists. In the case of Cuba, that list includes Bernie Sanders, Nicholas Kristof, and Nikole Hannah-Jones. And maybe we should add Jeffrey Sachs and some environmentalists to that list as well.