Meet the Resistance! They're Not Gonna Take It Anymore!

This video was from a piece in the Canada Free Press entitled, We're Not Gonna Take it!, and remember, this is Canada, a traditionally obedient and peaceable people, hardly considered conservative by any stretch of the imagination, but their history has shown them to also be a brave people.  To mistake their underlying desire for peace as cowardice, is a serious error in judgement.

Well, Trudeau has a minority government that only exists because Canada has a parliamentary system and he has formed a government by creating a coalition with other party's.  This might finally bring about an election and finally kick him to the curb. The only problem is those who profess to be the conservative party look a lot like liberals.

But at some point people will only take so much, even in Canada!  After all, they still have a much more of an American mentality about freedom than any other of our allies.  They just have a sucky system of government.....it's British....what can you expect?  Look at the "conservative" Bojo, a loon if there ever was one.

This video shows what Trudeau calls "small, fringe, minority" who have the audacity of holding "unacceptable views", and according to Trudeau, they "do not represent the views of Canadians who have been there for each other who know that following the science and stepping up to protect each other is the best way to continue to ensure our freedoms, rights, and values as a country”

Really?  Unacceptable to whom?  And Trudeau wouldn't know science if it kicked him where the sun doesn't shine.  As for protecting society and each other with all these mandates, it would appear Canadians are disgusted by Trudeau's views, since this "small fringe minority" with their "unacceptable views" are receiving an awful lot of support from the Canadian population all the way to Ottawa.  So, who is the "minority" with "unacceptable views"?  Someone is delusional here!  Canadian supporters of that “small fringe minority with unacceptable ideas” has raised $7.6 million Canadian dollars (almost $6 million US dollars).

However, no matter what blather Trudeau spews out Judi McLeod says there is No Way Justin Trudeau Can Possibly Stop The ‘Trucker Freedom Convoy’  saying:

Far more significant than their being referenced as the “world’s longest convoy”, is that they brought back to life, good, old fashioned Canadian patriotism, from which there is no looking back.

Judi also warns there Are Hazards Ahead, from:
A ravening leftwing media—bought and paid for to the tune of over $600-million by the Justin Trudeau-led Liberal government in Ottawa—are readying for a panther pounce on the credibility and motive of  truck drivers en route to Ottawa in a cross-country convoy protesting the federal government’s COVID-19 vaccine mandate."
Make no mistake, there will be dirty tricks by leftists, and the media (on both sides of the border) will play that tune 24/7, as if it's truth.  It's already started as shown in this Washington Post cartoon calling these truckers fascists. 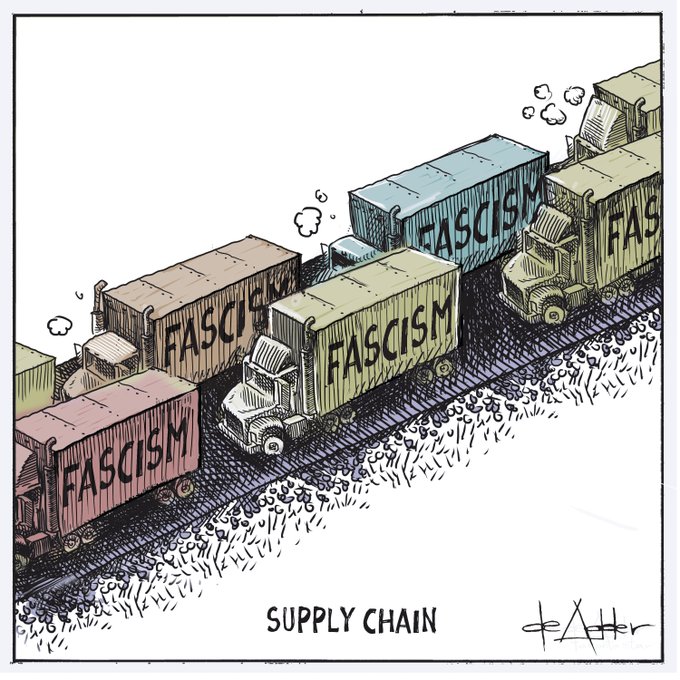 Andrea Widburg says in her article The  elites’ morally obscene response to the Canadian trucker convoy:
Trudeau, the smallest excuse for a human being ever to helm Canada, and his propaganda engine (i.e., the “news”) preemptively accuse the truckers of being violent extremists.
These elites around the world desire to impose the Great Reset, which would require people to become slaves to their governments, and do it voluntarily, being tracked through vaccination passports, which is already in the works in Europe,  and the bought and paid for media is virtually silent.
Do these ruling elites really think the free world's people will stand for that? Actually, yes, they do!
Are these truckers Canada's Gdansk?  It seems so, because they're not gonna take it anymore, and, it's not just Canadians who won't take it anymore.  More to come.
Posted by Rich Kozlovich at 5:51 AM