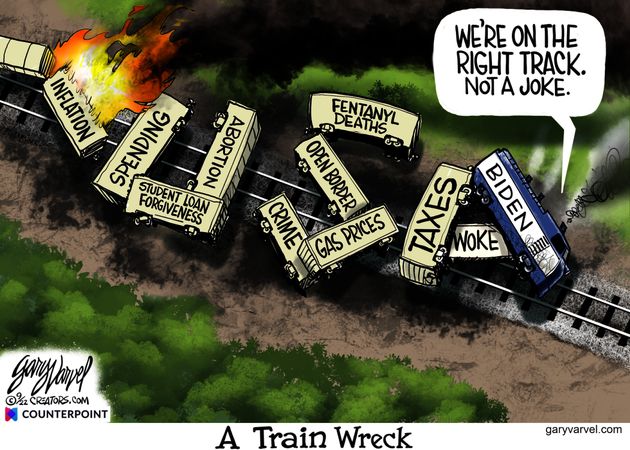 There are six commentaries and a podcast today, all profound, all thought provocative and I think insightful. I've said in the past the theme for the day could be America in Crisis daily, and today's articles reflect that.

Immigration and the consequence of Biden as President, a man who clearly has no idea what he's talking about, big government and deep state tyranny, the difference between what leftists are calling "our democracy" and the American republic, are all part of today's commentaries.

Also today:  Queen Elizabeth has passed, and not everyone has the same take on her reign, and as I've said in the past the English monarchs most important political philosophy has been:  Protect the family business.  Elizabeth reflected that mentality.  While I think she had a thankless task that she performed it well, that doesn't change the reality of the British monarchy.  Personally, I have no idea why anyone would want that position, but then again, I have no idea why anyone would want to be a politician either.   At least as a lifelong career, which was not the view of the founding fathers, or they would have put term limits in the Constitution.

Repairing all the damage being done by the Biden administration will not be entirely fixable, but without a total restructuring of the federal government, including the elimination of entire agencies, and departments, and wholesale elimination of a huge number of deep state federal employees, including the criminal prosecution of many of those who were supposed to be enforcing the law while actually breaking the law, and those politicians who've been corrupt to the core and gotten away with it, there can be no fix at all.

One of the things that should be observed is the failure of the Soviet Union, and the Russo/Ukrainian War, Putin and how so many Americans think America is so bad, and the leftist nations are so fair, just and paragons of equality, equity, diversity?  How can they be so foolish?  Oh, wait, I know, it's the poverty, misery, suffering and lack of opportunity that makes them so envious.  That way they have equity, equality, inclusion and diversity because everyone will be allowed to suffer together, thus becoming "one" with their neighbors.  That even includes the top people, even with their privileges.  Now that's inclusion!  Not much in the way of food, comfort, freedom of movement and choice, but there will be equity, equality, and inclusion.

Let's try and get this once and for all.  The left demands perfection from those they're constantly attacking, but never fail to deliver imperfection at the highest level.  They promise utopia and unfailingly deliver dystopia.  That's history and that history is incontestable.  It would be nice now if that history was being taught instead of the lies of Nikole Hannah-Jones and Howard Zinn.

Constant as the North Star
Posted by Rich Kozlovich at 6:08 AM