Covid and the SCOTUS Swamp

Editor's Note:  This was originally published on January 11, 2022 but in light of recent events I think it appropriate to republish.  RK 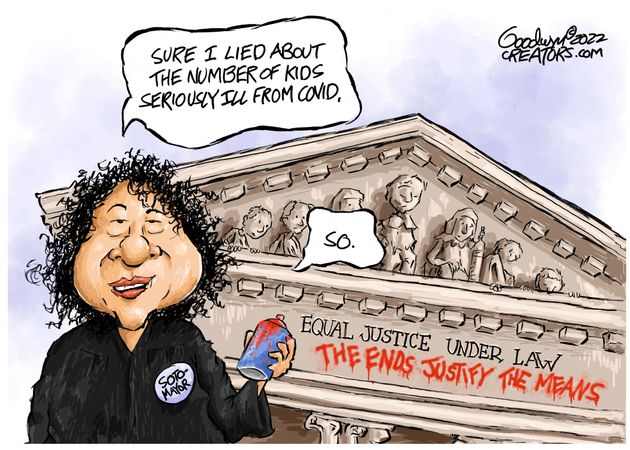 In Greek mythology Hercules was tasked with cleaning the Augean Stables, which he did by diverting two rivers into the stables, thus washing out all the manure.  The nation is in need of a Herculean effort to wash out the stench of corruption in the nation's federal judiciary, which is filled with political hacks, unfortunately that includes the Supreme Court of the United States, and nothing has exposed this stench like the current case before them involving OSHA and the Biden administration's efforts to by pass the Constitution with their vaccination mandates.

When I started writing twenty years ago it was solely in defense of the pest control industry and the tools we use, and I wanted to be absolutely accurate. I was prepared to follow the facts wherever they may lead.  What I found was a wide range of opinions, extreme opposite opinions.  At the beginning you have to wade through a lot of information from all sides of these issues, and a ton of misinformation, logical fallacies, data manipulation, false studies, etc., before you find the right answers and patterns of thought.  Once you've found who to trust, who to believe, what information is provable and what is not you're finally left with those who are reliable and truthful, and those who practice outright lying.

Let's start with Sotomayor, who stated during her Senate hearings for her seat on the Supreme Court of the United States:

"I would hope that a wise Latina woman with the richness of her experiences would more often than not reach a better conclusion than a white male who hasn't lived that life.”

Wisdom is the application of knowledge and understanding, so I wonder who is the "wise Latina" about whom she references? Because it isn't her.  She's clearly ignorant about much of which she speaks, and this case brings that ignorance of the facts, and her either ignorance of the law or her disdain for the law to the fore.

This RedState article, Sonia Sotomayor Loses Her Ever-Loving Mind at Oral Arguments Over Biden's Vaccine Mandate, by someone named Bonchie on Jan 07, 2022 states:

It’s been clear for a while now that you have five conservative Supreme Court justices, one left-leaning squish, two liberals, and one absolute nutjob. That’s not to say that Stephen Breyer and Elena Kagan aren’t also incredibly terrible at their jobs, but it is to say that Sonia Sotomayor is in a class by herself.

Apparently she's astonished...astonished mind you....that anyone would stand against these mandates because she knows....absolutely knows....there are "100,000 children in serious condition", then asking "Where do these people obtain their misinformation?

Unfortunately, her 100,000 child in crisis statistic is a lie, and she's the source of that misinformation.  The actual number, according to the he United States Department of Health and Human Services, the number is 3,342.  The reality is children are not significantly at risk from this variety of coronavirus, Covid-19, and they are not filling our hospitals.

She continues as the source of misinformation claiming that vaccinated people can't transmit the virus, which is known to be blatantly false, and has been known for some time, and the omicron variant is "as deadly and causes as much serious disease in the unvaccinated as delta did."  This is false.  She then stated, "We have hospitals that are almost at full capacity" with many children are now on ventilators as a result of this virus and we're "now having deaths at an unprecedented amount".  Again, false.

So, it seems clear she's either stunningly ignorant or she lies.  Either way, that makes her an incompetent and corrupt myrmidon jurist of the left, and certainly not the brightest pebble in the brook.

So let's go back to her "wise Latina" comment.  If any conservative or any color, male or female, or just a white male, said anything that arrogant the media would have crucified them, and now we know six things.

If there ever was a member of the federal judiciary that overwhelmingly demonstrates term limits should be imposed on the them via a Constitutional amendment, she's the one.

Let's deal with Justices Breyer and Kagan, but I don't have a cartoon for them that's appropriate,  and this one is so rich I just had to use it. 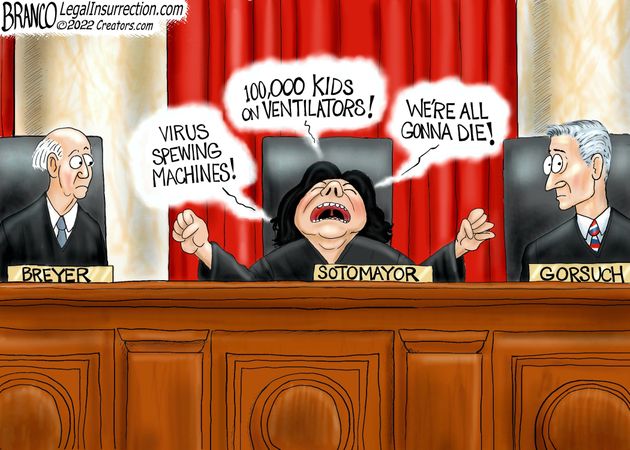 CLAIM: Vaccine mandates and masks would prevent all of the 750,000 daily new coronavirus cases in the current surge.

VERDICT: PARTLY FALSE. While vaccines and masks would prevent many cases, they do not prevent all transmission.

Actually, that statement is almost always false.  "Masks (especially cloth masks) are nearly useless in stopping or even slowing the spread of the Wuhan Virus". But no matter, the issue here is his claim there are 750,000 daily new coronavirus cases in the current surge, or did he say 750,000,000 as some have reported, which is of course impossible since there's only about 330,000,000 people in America, which means each and every one of them had to have contracted this disease twice.  But either way, either number is false.

Justice Breyer also claimed hospitals are full to the maximum as a result of this virus with people who are unvaccinated.  That's false.

The nation's hospitals are are not full of Wuhan Virus patients, and in point of fact, they're  not full of patients in general.  According to the U.S. Department of Health and Human Services (DHHS), only about 17 percent of all the patients in hospitals are Covid-19 patients, and it's clear with his wide ranging claim of anywhere between sixty percent and ninety percent capacity, he don's t  have a clue what the number really is.  In short, he's making it up, aka, lying.

Justice Kagan, not to be outdone by her nutty companions, is claiming this virus is:

Did she say facts?   Claiming its just the facts, presupposes she's telling the truth, or is it as one writer says "telling the truth", "is really just a leftist's way of saying, "I'm feeding you a crock of crap!"'

Let's try and get this right once and for all.  First, these aren't legitimate vaccines as have been defined for decades, that being a vaccine had to do two things.  Prevent infection and prevent transmission, and none of these "vaccines" do either, so they changed the definition to accommodate calling these drugs vaccines, which are experimental drugs since it normally takes ten to twelve years to go through all of the FDA's testing procedures.  In point of fact, they don't work, including Pfizers drug.  Pfizer CEO: Our Vaccines Offer ‘Limited, If Any Protection, otherwise there wouldn't be necessary to have an unending need for boosters Then there's the issue of bad reactions.  It is my view that at some point the long term consequences of these forced vaccinations is going to be this generation's Thalidomide crisis.

If Sotomayor is the number one demonstration of why we need a 28th Amendment to the Constitution for term limits for the federal judiciary, both Breyer and Kagan both run a close second

And to answer Sotomayor's question about where all the misinformation comes from.  It comes from you, your cohorts on the court, the corrupt media and the Biden administration's Deep Staters.

Only I think it can reasonably be called lying.
Posted by Rich Kozlovich at 6:13 AM

Email ThisBlogThis!Share to TwitterShare to FacebookShare to Pinterest
Labels: Covid and the SCOTUS Swamp, Sotomayor