Another short list of commentaries today, and a thought for the day I really enjoyed.  As time went by it was clear people from California, New York, and other Woke states, were leaving in droves because they couldn't stand the regulations, taxes and tyranny of their state governments, and moved to Florida, Texas and other human friendly states.  The trouble with that was it became obvious they were taking the stupidity that was destroying the states they left with them, and voting for the very things they were fleeing!

How insane is that?  Isn't repeating the same failure over and over again thinking if they just do it again and again those failures will eventually be successful a form of insanity?  Yes, it is!

In Pennsylvania the Senate race between Fetterman and Oz is assumed to be up in the air, but Fetterman is a disaster, and not because of his health issues, it's because of his political and philosophical views, and he's still ahead in the polls.  How can that be possible?

First, I haven't believed in polls for over 25 years, and that includes when they say things I agree with.  If polls are so accurate and trustworthy, then why do political campaigns go to an enormous expense of hiring their own in-house pollsters?  I don't believe in polls for the same reason I don't drink water out of the toilet.

So, let's assume the polls are rigged, and they probably are.  And lets assume the media is in the toilet with Fetterman, and they are, and the people of Pennsylvania see this as it really is and there's a vast silent majority out there all in for Oz, which is a conclusion that's up in the air at best.  Will Oz beat him? No!  Two words explain that. Voter Fraud.  Pennsylvania is a rotten fruit of voter fraud, and they've done nothing to fix it as far as I can see.

It still comes down to this in my opinion.  We're left to believe the Republican party of Pennsylvania is so bereft of potential candidates of quality they resorted to a carpetbagging New Jersey resident with dual citizenship who has a history of strange views as the only Republican available to run against a seriously flawed human being, and I'm not talking about Fetterman's stroke, which has clearly effected him.
What's wrong with Pennsylvanians of both parties?  How do people become so unattached to reality?
Illegal immigration is finally on the front burner because all of a sudden, these "sanctuary" cities who touted their Church of Wokeness credentials are having them dumped on their doors and what happens?  They call out the national guard, and start screaming these governors who are sending them there are violating the law and kidnapping them.
How can a government agency kidnap an illegal alien?  They're criminals, it's called arresting, not kidnapping, something the federal government refuses to do in spite of the fact that's a federal responsibility and is the law of the land, all of which the Biden administration refuses to do and is in fact promoting the violation of America immigration laws.  And up until now the left has been all for it, until a mere handful turned up on their doorsteps, and all of a sudden it was a nightmare, a nightmare I tell you!
What's a nightmare are the consequences of actions fueled by the arrogance, deceit, and hypocrisy of all leftists who never saw a burden so great they couldn't put it on someone else's shoulders, but scream in agony if they have to pick up a toothpick.
Enjoy today's offerings and best wishes,
Rich 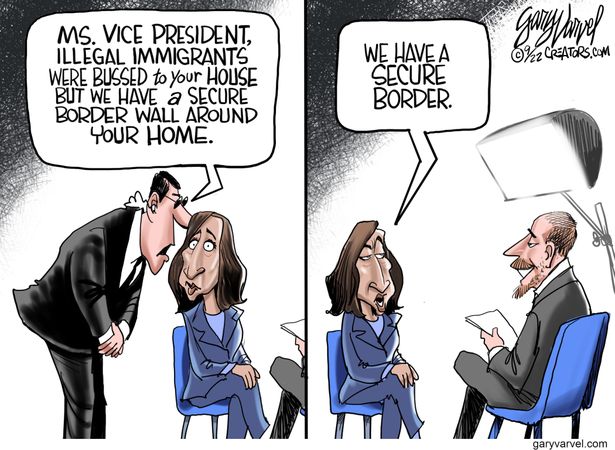 Constant as the North Star
Posted by Rich Kozlovich at 6:35 AM