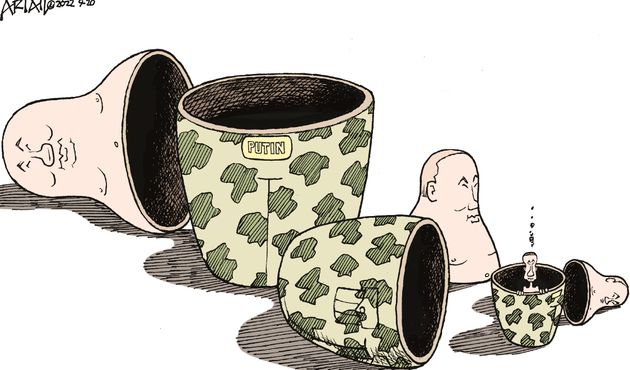 There's been a lot of talk about Putin and that he's a failure and what his options are at this point.  George Friedman of Geopolitical Futures wrote this piece, The War, and since I'm not signed in I assume it's one of his free articles, noted this about this Russo/Ukrainian War.  None of Putin's military plans worked due to lousy planning, lousy training, lousy leadership and lousy equipment, and most importantly, bad intelligence.

The Ukrainians had seriously updated their equipment and preparedness, and they didn't just roll over and die, although Putin has directly targeted civilians and killed untold numbers of non-combatants, without even a whimper from that corrupt cabal at the United Nations, including their Human Rights Council, for what must clearly be considered Crimes Against Humanity.

For years, especially after the first Iran war, I believed their military hardware was overrated, but no one, including me, realized just how bad their equipment really is.  I used to think that without American support of NATO Russia would march right down the North European Plan into France.  They couldn't have held it, but I thought they could do it.  Wrong!  They've wouldn't have gotten past Poland.

So, now what does Putin do?  George outlines a number of options.

Not gonna happen!  Neither Russia or the Ukraine have the financial wherewithal, yet Putin's now decided to strain his resources beyond what he can afford by calling up the reserves of 300,000 men, largely untrained, largely unwilling, and he's taking heat for his failures from "allies".  (Update 12:45 PM: This was sent to my by one of my correspondents this morning, Putin's Order for 300,000 Fighters Drives Russians to the Streets in Protest.) He's also threatening the use of nuclear arms.  Now you know, that he knows, he's in trouble.

I suggested another option.

The Russians kick Putin out.  Even with new well trained reinforcements I don't think Putin can win because morale is in the toilet, the people are now aware this is a farce, the politicians think Putin needs to go and some are demanding his resignation with others demanding he be arrested and I think he's willing to kill all of them to stay in power.

He's not a Khrushchev who was able to retire, he's made some really vicious decisions and I'm sure there would be pay back, he can't quit, and at some point I'm thinking the military will back a coup since he's placed all the blame for this failure on them.  When the Praetorian Guard is threatened, Caesar's die.
Occasionally George responds, and did this time saying: Its an option but it hasn't happened yet.  Plus who knows who replace him? Could be a good general.
I thought about that.  Putin is surrounded by a hand picked band of like minded radicals, but I have to believe there's a Claus von Stauffenberg cabal in the Russian military.  But no matter what happens here's the kicker.  None of them can pay for all this.  Russia's economy is no more stable than Europe's, and most likely worse off and getting worse, and China isn't going to risk economic sanctions to give total support to Russia.  One thing must be clear, and that China is looking at Russia, and Putin, as a weak sister. One who could be taken advantage of.
It's my view Russia will never recover from this internationally, militarily, economically or socially until they dump their economic system of central planning and their system of government.
It ain't gonna happen.
Here are today's offerings.  Six commentaries, one by me.
Enjoy!

Constant as the North Star

Posted by Rich Kozlovich at 9:19 AM