When the Commerce Department announced in February that the United States had a record trade deficit for 2021, I shared this video to help make the point that those trade numbers were that year’s “least important economic news.”

The main thing to understand is that a trade deficit is simply the flip side of an investment surplus.

When Americans use dollars to buy goods from other nations, those dollars are only valuable to foreigners because they can use them to buy things from America.

In many cases, they buy American goods and services. But they also use many of those dollars to invest in the U.S. economy.

Jeff Jacoby of the Boston Globe shares my viewpoint. He recently opined on this issue, echoing the important insight about the link between trade flows and investment flows.

The US trade deficit hit an all-time high in March, widening to nearly $110 billion as the nation imported considerably more goods than it exported. That can’t be good, right? Actually, it’s fine. …It’s not an indication of actual economic weakness. …Quite the contrary: All things being equal, imports are usually evidence of economic vitality and success. …The dollars Americans spend on imports aren’t “lost.” They are exchanged for desirable and affordable goods, services, parts, and commodities that strengthen Americans’ economy while elevating their US lifestyle. Better still, those dollars then come back to the United States, where they are used to invest in American assets or buy American exports, creating even more value and putting even more Americans to work. …a trade “deficit” isn’t a debt we owe. It is an accounting entry that tells us how much more we were enriched by foreigners than they were by us. ..the US economy has some real problems. Happily, the trade deficit isn’t one of them. Imports are good. And more imports? They’re good too.

This does not mean, however, that everyone is a winner.

That’s bad news for workers in sectors that are dying (such as typewriter makers after personal computers hit the market). 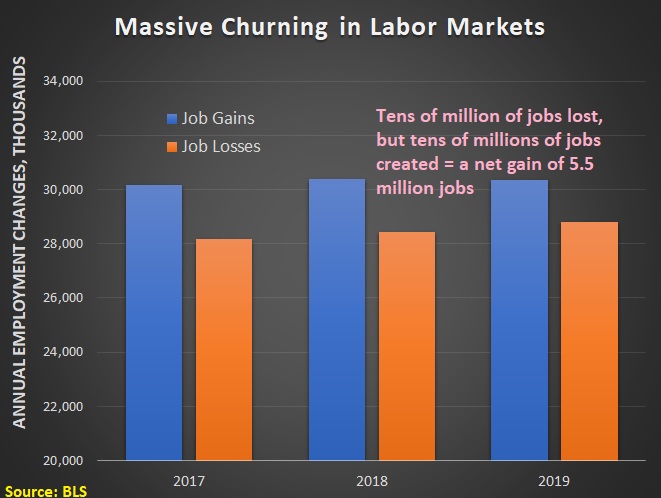 This is what is called “creative destruction.” It’s painful, but it is why we are much richer today than we were in the past.

The good news is that this usually happens…at least if politicians resist the temptation to over-tax, over-spend, and over-regulate.

The bottom line is that free trade is much better for long-run prosperity than protectionism.

Unless, of course, you think it’s a good idea to copy the policies of Herbert Hoover.

Posted by Rich Kozlovich at 7:44 AM