Covid Vaccine Pushers on Campus: A Law and Economics Explanation 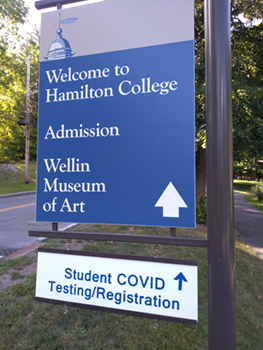 “There is no power relation without the correlative constitution of a field of knowledge, nor any knowledge that does not presuppose and constitute at the same time power relations. A despot may otherwise constrain his slaves with iron chains; but a true politician binds them even more strongly by the chain of their own ideas. On the soft fibers of the brain is founded the unshakable base of the soundest of Empires.” Michel Foucault, Discipline and Punish: The Birth of the Prison

“A criminal conspiracy at common law involves an agreement (or understanding expressed or implied) to commit a crime, or to commit a lawful act in an unlawful manner. It will be enough if the acts contemplated are corrupt, dishonest, fraudulent, or immoral.”  Justice Blair Moody, Jr., People v. Carter

In August of 2020 I wrote an article concerning the leading role played by universities in the Covid pandemic program. At that time, higher education’s most observable institutional behavioral change was in its ready, unquestioning acceptance of government and corporate medical concepts, and in their almost immediate auto-coordination as a group, into biosecurity “compounds.”

This was especially observable during the first wave of enforced behavioral alteration directed at students, while faculty, along with their union, the AAUP, continue to be eagerly compliant. These initial institutional alterations included startling new uses of social engineering language, including “social distancing,” “sheltering in place,” “isolation,” along with a method of what mathematicians call “ant farming,” which involves the channeling, herding and ultimately the self-directed conformity of group mass behavior, which is observable in insect colonies.

The introduction and dissemination of testing and face masks marked the beginning of a radically new modification of human mass behavioral practices, while strengthening the attendant psychological splitting of cognition and personality, both at an individual and social level. This split borrows from human psychology and its instinct for dualistic, analogue or “black and white” distinctions. Covid created the safe and unsafe; the trusted and untrusted; and member and non-member tribalism.

The ritualization of masking also created an ideological branding and signaling function as group social identity and political affiliation even, became symbolized and reinforced by the mask—a kind of postmodern armband of separation and belonging. It was (and is) combined with carefully orchestrated media saturation, “expert” testimony, and media personalities and political figures who reinforced rapid mass compliance (or in many cases, heightened suspicion and caution).

The introduction and dissemination of testing and face masks marked the beginning of a radically new modification of human mass behavioral practices, while strengthening the attendant psychological splitting of cognition and personality, both at an individual and social level. This split borrows from human psychology and its instinct for dualistic, analogue or “black and white” distinctions. Covid created the safe and unsafe; the trusted and untrusted; and member and non-member tribalism.

The ritualization of masking also created an ideological branding and signaling function as group social identity and political affiliation even, became symbolized and reinforced by the mask—a kind of postmodern armband of separation and belonging. It was (and is) combined with carefully orchestrated media saturation, “expert” testimony, and media personalities and political figures who reinforced rapid mass compliance (or in many cases, heightened suspicion and caution). 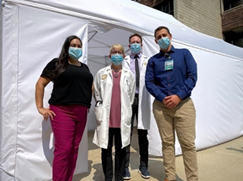 But it wasn’t until the Covid vaccination program exited its “operation warp speed” development phase, and transitioned to mass-distributed injection operations—which were the subject of intense public relations, marketing and belief indoctrination—that the university complex transformed from its more historical function of organized rational empirical and reasoned learning, into a unified, monolithic bio-medical operation. Indeed, higher education immediately deployed its arsenal of incentives, inducements and even threats and extortion (acceptance rates, scholarships, degree-granting, and campus forced isolation and punishments).

Universities also became leading public mass-indoctrination and injection facilities, while supporting tracing, tracking, monitoring and notification programs, in part based on cooperative funded research with government and corporations. Cornell University’s president is on the Board of IBM which created the “Bio-ID” and electronic passport system.  Microsoft and the Gates Foundation also finance broad “pandemic digitization” initiatives.

In April of 2021, I published a follow-on article that sought to explain why universities were undertaking these roles, and what incentives, rewards and other motivations were playing a key role in their unprecedented institutional transformation—that is, why they became in effect, controlled laboratories in behavioral psychology, medical experimentation and molecular engineering. While a kind of normalization has recently set in among the public, and with a certain understandable relief, there is also a sense of “perseverance victory” which seems to characterize mass psychology, due to a temporary hiatus or relaxation in biosecurity enforced protocols (like prisoners granted outdoor recreation time from isolation). It is clear that Covid behavioral and biomedical operations are still in active status, however, and they appear to be quickly ramping up for a second phase of implementation including other purported viruses, with further social engineering ramifications.

In this regard, the universities in the major “R1” research group which include the Ivy League, most large state universities, and other institutions, such as the University of Chicago, Johns Hopkins, Case Western, and Emory (where a Covid “pill” was developed and commercialized with government funding), continue to play a central role as a network of bioresearch “camps.” The roll out of a “booster” regime continues to be the core vaccine policy, in part because it seeks to normalize the initial vaccine itself (which has largely failed, and with serious side effects), while borrowing a medical term that is widely accepted as safe and most of all, routine. The booster program, however, signaled further that the entire Covid policy, its underlying science, and attendant public policy, was suspect, as more astute observers objected to being used as “guinea pigs.”

The data produced over the past 24 months has been both “big” in sample size, and unequivocal in interpretive implications: the vaccines don’t work in any recognizable medical safety dimension, and are in fact, a medical hazard that has resulted in death, heart attack, blood clots, stroke, infection, brain complications, and immunity disorders, among other effects, and may even create the virus it was putatively intended to fight.

Given the overwhelming constellation of medical (and even psychological) complications, risk irregularities, and mounting accusations of systematic medical fraud, why, then, are universities still united in not only maintaining the overall Covid biosecurity and biomedical regime, but appearing to intensify their ideological, institutional and operational role? Why is there a complete absence (with very few exceptions but for several dissident resident scientists) of questioning, investigation, and even caution?  Why have universities become a completely open, unobstructed, free-flowing communication pipeline from the C.D.C., W.H.O. and Big Pharma, that transmits and delivers a full spectrum Covid “arsenal” against students, and even the larger public?

I offer four reasons and motivations:

bribery (from corporations), extortion (from the federal government), corporate development demands (from the Trustees), and continuity (from the Academy).

Extortion: University administrators are also effectively extorted by federal policy through threats of financial withholding, penalties, loss or reduction of research status, and risks of corporate liability from legal actions brought under claims of health code violation, general “pandemic” control expectations and even accusations under the Civil Rights Act.

Corporate Development Demands: Universities have also become nearly fully-conforming corporations modelled after commercial counterparts, and overseen by Trustees, Regents, Fellows or Directors who are almost exclusively drawn from the commercial private sector. They see the modern university the same way they see publicly traded corporations: as ones obligated to continuous growth and corporate development in terms of revenue, customers, marketing, assets and endowment value. Covid, in this regard, is a university financial heyday.

Continuity: Lastly, the inherent institutional culture of the university is based on continuity; that is, on traditions, or perceptions of tradition, especially through the academy, its faculty members, and their routines of protected labor markets (tenure), along with the symbolic value of authority relationships toward students. Continuity means that universities will seek to adapt to whatever external social circumstances may affect them, regardless of what these circumstances may represent in ethical or professional choices and trade-offs. This extends also to a general deference from the public and media, regarding the assumptions of objective expertise that reside in university professor positions. Covid, which draws its authority from fear and uncertainty, plays perfectly into the hands of the university, its medical staff, and its professional schools of public policy, business, law, economics and engineering, in ways that could only be described as ideal.

Except for one overwhelming dissonance: The Covid medical response appears more centered around investing, commercial profiteering, and government social control.  This leaves universities as continuing, cooperating agents in what appears medicalized corruption that may have profound consequences when it finally collapses.

Even with relatively less direct roles in the “mandated” Covid vaccine initiative (that can be characterized under vicarious liability), federal case rulings can make universities culpable: “One effect of the Pinkerton rule is that it potentially makes relatively minor parties in a large conspiracy criminally responsible for many completed offenses over which they had little or no control.”

The Covid syndicate—made up of Big Pharma, hedge funds, private Foundations, individual investors, and government—assumes that they will all remain silent or loyal to each other, regarding vaccine risks. But if one member decides to be a “whistle blower” or release medical testing data, then the vaccine program may fall apart.

Economists call this scenario a prisoner’s dilemma—one party may try to protect themselves rather than remain loyal to the other party.  When one member “confesses,” however, all others in the group may become re-characterized under rules of criminal conspiracy doctrine, and under international human rights treaty violations including the Rome Statute, and the Nuremberg Code.  As Judge Richard Posner relates, “[A]n admission by one is an admission by all, and can be used against all as “their admission.”

Matthew G. Andersson is a science and technology professional, former CEO, and author.  He attended the University of Texas at Austin, Yale University and the University of Chicago. He is the author of the upcoming book "Legally Blind: How Ideology Has Captured the Law School, the Judiciary, and the Constitution,” and has testified before the U.S. Senate.

Posted by Rich Kozlovich at 6:23 AM