In the make-believe country of Libertaria, there is no such thing as Social Security or any other type of government-mandated retirement policy.

In the real world, however, most nations have created “pay-as-you-go” retirement schemes based on taxing young workers to give benefits to old retirees.

The good news is that a growing number of nations have created personal retirement accounts based on private savings. These “funded” systems are designed to replace and/or augment the government programs.

People who study these issues often refer to “three pillars” that represent the various potential sources of retirement income. 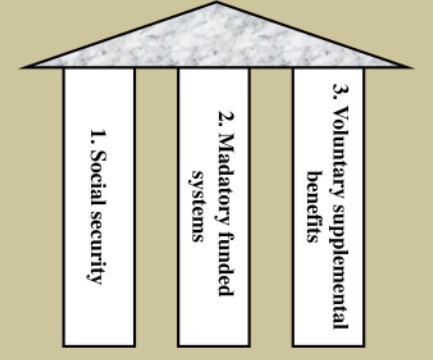 In our libertarian fantasy world, everyone would use option #3 and there would not be options #1 and #2.

In a libertarian-ish world, everyone would use option #2 with option #1 only as an emergency back-up.

A few days ago, I saw a headline that got me excited. I thought China was joining the libertarian-ish world by shifting from a pay-as-you-go government system to mandatory private savings (going from option #1 to option #2). Here are some excerpts from a Nasdaq report.

The China Security Regulatory Commission (CSRC) announced the launch of the first private pension plan due to anticipated economic challenges with an aging population. …the CSRC said that pension money “can provide more long-term, and stable funds to develop the real economy, via capital markets.” …This program was created to add additional resources for China’s aging population. In 20 years, 28% of China’s population will be more than 60 years old, up from 10% today, according to the World Health Organization.

But as I read more details, I learned that China was keeping its government system and simply adding an option #3.

Since people already had the ability to save money, this is hardly an earth-shaking development.

To be sure, it seems like Chinese workers will not have their saving subject to any double taxation if they use these new pension vehicles, so I suppose that deserves some applause.

But it would be much more exciting and praiseworthy if the Chinese government (which has been backsliding in recent years) had proposed some something far bolder.

P.S. To understand why I’m not optimistic about China, here’s my summary of the nation’s post-World War II economic history.

P.P.S. And if China takes advice from either the IMF or OECD, I’ll be even less optimistic.

Posted by Rich Kozlovich at 6:07 AM