Heads In The Sand — The Real Cause Of Today's Opioid Deaths

"I cut it three times and it's still too short" Old carpenter's joke (1)
Pretty funny, especially for us do-it-yourselfers, who may not think things over carefully enough before we plunge into a home project like a new deck or replacement windows. This kind of stuff happens when amateurs try to do the work of professionals, and it's often good for a chuckle or two. I mean, who amongst us hasn't hung a door upside down or measured deck boards incorrectly?
But when so-called professionals who act like amateurs screw up public health policy, things become decidedly less funny. Especially for the many victims of political and bureaucratic incompetence and the opportunists who have managed to elevate themselves to sufficiently lofty positions where they actually have enough power to do damage.
If you've been paying attention to the nationwide narcotic catastrophe that is now claiming 142 lives every day (and seems to be getting worse), you may be shaking your head in disbelief. If so, it is not without reason. The idea that slapping three-day caps on Vicodin and Percocet prescriptions will in any way decrease overdose deaths is so supernaturally stupid that no one could really believe this nonsense anymore, right? No, wrong.
As overdoses soar, states limit the length of
painkiller prescriptions Charleston Gazette-Mail, 8/10/17
According to a new article in the Charleston Gazette-Mail, the faulty premise of controlling the overdose dilemma by restricting pain medications is still pervasive throughout the country. So much so that there are now 17 states that have passed laws limiting the number of days of opioid prescriptions, the total number of pills, and the maximum dose, with the goal of putting the breaks on an unprecedented epidemic of overdose deaths. How's that working out? Exactly as you would predict—terribly.
Before I discuss the foolish actions that are blindly being implemented by regulators and legislators and how badly they are failing, we need to first understand the real causes of today's opioid catastrophe. Because without a clear understanding of the problem, even a rational plan of attack - let alone a solution - will be impossible. Unfortunately, there is little evidence that public health officials understand what is really going on, which is why we keep hearing the same illogical and hackneyed responses over and over. Here's the real story.
Today's opioid overdose crisis began in force in 2010 (Figure 1), in what was a quintessential example of the law of unintended consequences. After years of research, Purdue Pharma finally discovered a new formulation for OxyContin—a significant driver of opioid addiction since its introduction in 1996. The new formulation was difficult to abuse; when users tried to grind up the pills so the drug could be smoked, snorted, or injected it turned into a gum instead of a powder as it had before.

Grinding up OxyContin before and after reformulation. Prior to 2010, the pill was easy to grind up, which defeated its time-release formulation, to give as much as 80 mg (16 Percocet pills) of pure oxycodone, which could be snorted, smoked or injected. The new formulation changed that. Photo: Popular Science
Figure 1 (below) shows a clear inverse relationship between the availability of abusable OxyContin and the subsequent mad rush to heroin—a fact that the press, the CDC, and many politicians either don't understand or, choose to ignore. This is beyond obvious. Simply look at the red arrows on both graphs. As OxyContin use dropped (left) heroin overdose deaths soared (right). This relationship is indisputable. Although pre-2010 OxyContin played a significant part in creating a huge population of opioid addicts, it could be argued that the improvement of the pill inadvertently did even more damage. Addicts could no longer get the pure oxycodone they needed and promptly switched to heroin. This switch marked the beginning of the unprecedented surge in heroin (now fentanyl) deaths that now appear on the news almost every day.

Figure 1: The real cause of today's skyrocketing overdose opioid deaths.
Left: OxyContin abuse dropped sharply beginning in 2010 when the FDA approved an abuse-resistant formulation. Source: Pain News Network, Radar Systems.
Right: Soaring heroin use immediately followed the reformulation of OxyContin. Note that the number of heroin deaths between 2001-2010 was stable, in the range of 2000-3000 per year.  But between 2010 and 2015, this number shot up to 10,000. It is clear that not only was the onset of today's overdose epidemic not driven by pills, but it was, in fact, driven by the SCARCITY of pills (2). Source: NIH.
Another common fallacy that is now all but "fact" is that opioid pills are now responsible for the surge in overdose deaths in the US, but a bit of digging around on the NIH site tells us otherwise. In 2010, the year that OxyContin became abuse-resistant, 20,000 people died from opioid overdoses. During the ensuing five years, OxyContin abuse dropped and the strict restrictions we now see on opioid pills began to take hold. The result? Between 2010-2015 opioid overdose deaths in the US increased by 65%, roughly 13,000. And even a cursory examination of Figure 2 shows that increase was entirely due to injectable drugs like heroin or fentanyl. 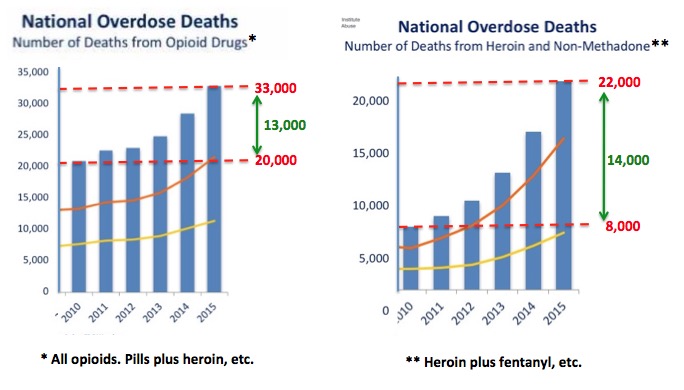 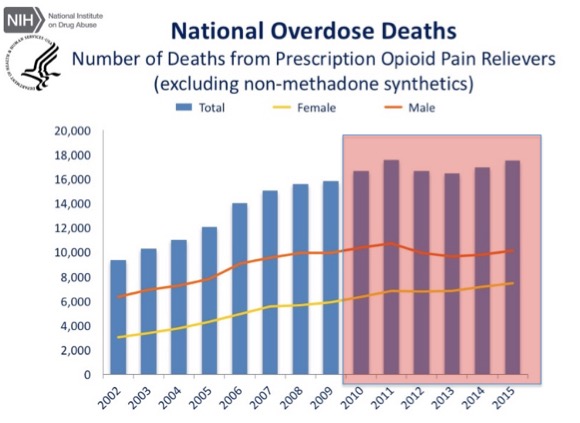 Figure 3: Deaths from overdoses of prescription opioids were unchanged between 2010 and 2015 (pink box). Source: National Institute on Drug Abuse (NIH)
Yet we still routinely see headlines such as the following:

It is this fallacy that is causing genuine harm, both to people who are addicted to opioids and those who depend on them for pain control. Pain patients suffer while addicts die in greater and greater numbers. Our policies have been an abject failure by any measure. Disgraceful.
Next: Part 2: States Crack Down On Pills To Fight Fentanyl. Crazy.
Notes:
(1) Thanks to Jamie Ragusa for this one.
(2) Economic factors also play a big role. Heroin is cheaper than pills. The street value of opioid pills ranges from $5 to $80. A bag of heroin is about $5.
My Take - Normally I don't post the questions or comments from the articles, but this issue has become so politicized I feel it's important to post this question from cha hui • 12 days ago asking:

"so what ideas do you have specifically to deal with this problem? what would you tell law enforce and drug enforcement agencies and politicians do specifically?"  I did so because that was my qestion.

Here's Josh's response, which demonstrates just how difficult any answer to this is.

Josh Bloom This is both easy and difficult. The "easy" part is admitting that harsh restrictions on prescription opioids have provided no benefit, only harm, especially to pain patients. The entire 2016 CDC Guideline for Prescribing Opioids for Chronic Pain has to be thrown out. The CDC and PROP premise that limiting prescriptions will prevent pain patients from becoming addicted is clearly wrong. The data that I showed proves that it does nothing of the sort. Addiction to opioid in pain patients - even those who have been treated long term- is rare, and there is plenty of evidence to support this. Addiction arises from *recreational*, not therapeutic use of the drugs.

While pill mills must be shut down, the government must stay out of the doctor's office. There cannot be arbitrary limits on dose or number of pills. Doctors who act in good faith should not have to worry about getting on a DEA list (they do). Patients with real needs should NOT have their doses involuntarily tapered down. This is barbaric. The care of patients is none of the government's damn business. Loosening the tight restrictions on prescribing meds for pain patients and the physicians who treat them is essential.

These new laws and policies punish the innocent to protect the guilty.

For those already addicted, there is no easy answer. With fentanyl replacing heroin, addicts will die sooner or later. It is inevitable. If this takes wider use of methadone to stem this tide, so be it. The Puritanical objection to "replacing one drug for another" may sound appealing, but this is real life. Harm reduction, not philosophy is what is crucial.

The war on drugs has never been won. Carrying it out on the backs of the sick and injured is inhumane.

Posted by Rich Kozlovich at 4:31 AM