At the risk of making myself unpopular with some of my fellow libertarians, not all forms of government coercion are created equal. 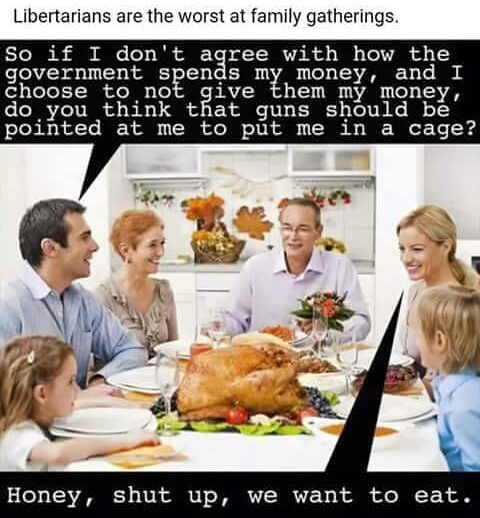 I don’t like redistribution in the United States. I recognize that such programs are financed with taxes and that the internal revenue code is enforced by coercion (if you don’t believe me, see what happens when you choose not to comply with our supposedly voluntary system). And if you catch me in a cranky mood, I’ll be like the stereotypical libertarian at Thanksgiving dinner and wax poetic about what’s wrong with the system.
That being said, I much prefer the coercion found in western democracies compared to the totalitarian versions of coercion found in many other parts of the world.

At least we have the rule of law, which limits (however imperfectly) capricious abuse by government officials. That’s not the case in many countries. Our courts also are generally independent and our Constitution still protects many personal liberties, things that can’t be taken for granted in some places.

Moreover, there is only a trivially small risk of getting abused by the state in western nations because you have unpopular views. And there’s little danger of persecution by government (at least nowadays) based on factors such as race and religion.

This is what makes liberal democracy a good form of government (with “liberal” in this case being a reference to classical liberalism rather than the modern version).

Unfortunately, there are some people in America that don’t believe in these principles. They call themselves all sorts of names, from white nationalist to antifa, but they share the common bond of totalitarianism.

J.D. Tuccille has an article for Reason that elaborates on this link.


Take a side? You bet. …advocates of a free, open, and liberal society are a side—the correct side—and the left-wing and right-wing thugs battling in the streets are nothing more than rival siblings from a dysfunctional illiberal family.

And Tuccille is rightly critical of Trump for giving even a shred of aid and comfort to such people.
But that doesn’t mean the counter-protestors (or, to be more accurate, a subsection of them) are praiseworthy. Indeed, some of them are similarly violent and evil. Tuccille lists some of the totalitarian efforts by folks on the hard left.


In June, James Hodgkinson opened fire on Republican members of Congress gathered for a baseball practice. …the supporter of Occupy Wall Street and former Bernie Sanders volunteer sent six people, including Rep. Steve Scalise (R-LA), to the hospital… Before that, left-wing protesters violently shut down a Middlebury College speech by Charles Murray, injuring Professor Alison Stanger in the process, rioted over a speech by professional provocateur Milo Yiannopoulos, and forced the cancellation of a Republican parade in Portland, Oregon, with promises that “the police cannot stop us from shutting down roads.” They boast of their contempt for free speech.

He closes with a rejection of the “whataboutism” argument, which is being used by some to suppress criticism of the violent left.


…for those of us already calling out the violent bigots flaunting Nazi imagery, it’s not whataboutism to point out that an alleged alternative isn’t actually an alternative at all—it’s just another version of the same thing. …There’s no reason to favor one illiberal force over another when our country has a long history based on much different, and much better, political principles. …Despite our many differences over specific policies, most Americans have traditionally supported the side of liberty, tolerance, free speech, and peaceful political change, within broad parameters. That side is in opposition to the violent, authoritarian thugs of the right and of the left.

Here’s an Imgur image from Reddit’s libertarian page that sums up my thinking.

In the interests of accuracy, I am partly sympathetic to the folks involved with Black Lives Matter. I get very upset when I read about low-income minorities suffering because politicians at the local level use cops to generate revenue rather than to protect against bad guys.

And maybe some of the other groups happen to be on the right side of some random issues (for all I know, maybe Nazis and commies oppose Trump’s foolish choice to expand U.S. intervention in Afghanistan).

But as a general rule, what animates the groups in the above photo is that they want to impose – even by violence – some form of totalitarian government. Yes, they may hate each other, but only in the sense that two street gangs may be vicious rivals because they each want control over some turf.
Here’s a video that examines the preposterous (and presumably politically motivated) assertion that there’s some sort of common ground between Nazis are liberty-oriented groups such as the Tea Party.


Let’s look at an example at the common link between socialism and fascism. The Library of Economics and Liberty has a very insightful article on Mussolini’s hostility to capitalism.


Interestingly, Mussolini found much of John Maynard Keynes’s economic theories consistent with fascism, writing: “Fascism entirely agrees with Mr. Maynard Keynes… In fact, Mr. Keynes’ excellent little book, The End of Laissez-Faire (l926) might, so far as it goes, serve as a useful introduction to fascist economics. There is scarcely anything to object to in it and there is much to applaud.” …In his “Doctrine of Fascism,” Mussolini wrote: “The Fascist conception of life accepts the individual only in so far as his interests coincide with the State. . . . Fascism reasserts the rights of the state. If classical liberalism spells individualism, Fascism spells government.” …In May 1934, …Mussolini declared, “Three-fourths of [the] Italian economy, industrial and agricultural, is in the hands of the state.”

To be fair, it is possible to believe in lots of statism without being a totalitarian. For example, there are true-believing socialists in western nations who believe in confiscatory taxation, nationalization of industry, and all sorts of other wildly misguided policies. But, to their credit, they accept election results and don’t believe in killing, or even assaulting, their political opponents.

The bottom line is that well-meaning people from the right, left, and center should be united in their defense of liberal democracy.

On a practical level, there are a couple of implications.

It would be good if people on the right and left argued within the bounds of decency. Yes, I’ll call my opponents big-government statists and they’ll call me a heartless capitalist. I’ll say they’re trying to create dependency for political advantage and they’ll say I’m a tool of the Koch brothers. That’s normal fun and games.

But we should reserve our really negative rhetoric for the thugs who genuinely favor totalitarianism. And the two big political parties should be especially vigilant about disowning and criticizing the groups that are perceived as being indirectly on their side. As such, Republicans should condemn Nazis and like-minded groups. And Democrats should condemn antifa and like-minded groups.
As for the rest of us, we should try to be like Daryl Davis and Matthew Stevenson.

P.S. Since I believe in freedom and the rule of law, I don’t think totalitarian-minded groups should be randomly persecuted. If some nutty leftists want to set up a commune based on “from each according to ability, to each according to needs,” that’s fine with me so long as they aren’t trying to oppress others. Similarly, if some dumb rednecks decide to set up an Aryan compound in some isolated forest, that’s none of my business so long as they don’t try to infringe upon the rights of other. We can and should criticize such people, of course, but don’t arrest them for having warped hearts.
Posted by Rich Kozlovich at 4:49 AM