Why Is the Trump Administration AWOL on the IRS?

With one very puzzling exception. 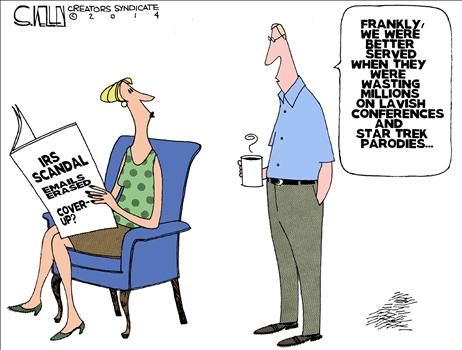 No steps have been taken to reverse the Obama-era policy of stonewalling to hide evidence of IRS scandals. Everything seems to be on auto-pilot.

The Wall Street Journal opined about the issue today and is justifiably frustrated.


The Obama Justice Department dismissed the IRS political targeting scandal as no big deal, and the Trump Administration hasn’t been any better. …These are basic questions of political accountability, even if the IRS has stonewalled since 2013. President Obama continued to spin that the targeting was the result of some “boneheaded” IRS line officers in Cincinnati who didn’t understand tax law. Yet Congressional investigations have uncovered clear evidence that the targeting was ordered and directed out of Washington. Former director of Exempt Organizations Lois Lerner was at the center of that Washington effort, but the IRS allowed her to retire with benefits. She invoked the Fifth Amendment before Congress. One of her principal deputies, Holly Paz, has submitted to a deposition in separate litigation, but the judge has sealed her testimony after she claimed she faced threats. The Acting Commissioner of the IRS at the time, Stephen Miller, stepped down in the wake of the scandal, but as far as anyone outside the IRS knows, no other IRS employee has been held to account. Even if the culprits were “rogue employees,” as the IRS claims, the public deserves to know what happened. …The Trump Administration also has a duty to provide some answers. The Justice Department and IRS have continued to resist the lawsuits as doggedly as they did in the Obama era. Attorney General Jeff Sessions can change that… Seven years is too long to wait for answers over abuses of the government’s taxing power.

This is spot on. It’s outrageous that the Obama Administration weaponized and politicized the IRS. But it’s also absurdly incompetent that the Trump Administration isn’t cleaning up the mess.

I understand why the bureaucrats at the Justice Department instinctively (and probably ideologically) want to protect their counterparts at the IRS. But, as the WSJ stated, there’s no reason why Attorney General Sessions isn’t using his authority to change policy.

The President’s failure to fire the ethically tainted IRS Commissioner is a troubling sign that the problem isn’t limited to the Justice Department.


One of Republicans’ least favorite Obama administration officials remains in his position: IRS Commissioner John Koskinen. Some Republicans lawmakers have asked President Trump to ask for Koskinen’s resignation. The commissioner’s term expires in November, but he has said he would step aside sooner if asked by the president. …Koskinen to lead the IRS in 2013, not long after it was revealed that the agency had subjected Tea Party groups’ applications for tax-exempt status to extra scrutiny and delays. …Many Republicans accuse Koskinen of impeding congressional investigations into the political-targeting scandal. They argue that he made false and misleading statements under oath and didn’t comply with a subpoena. During the last months of Obama’s presidency, some House Republicans pushed for a vote on Koskinen’s impeachment… Since Trump has taken office, there have been calls from GOP lawmakers for Koskinen to step down. Days after Trump’s inauguration, Republican Study Committee (RSC) Chairman Mark Walker (R-N.C.) and more than 50 other lawmakers sent a letter urging Trump to fire Koskinen “in the most expedient manner practicable.” …It’s unclear why Trump hasn’t ousted Koskinen or if he plans to do so in the future.

Very disappointing. I’m not a fan of conspiracy theories, but this almost leads me to wonder whether Koskinen has some damaging information on Trump.

Incidentally, the Justice Department may be dragging its feet and the White House may have cold feet, but the Treasury Department is overtly on the wrong side. And the problem starts at the top, resulting in praise for the Treasury Secretary from the pro-IRS forces at the New York Times.


President Trump’s Treasury secretary, Steven Mnuchin, knows that investing in the Internal Revenue Service yields significant returns… And he’s right: Every dollar spent on the agency returns $4 in revenue for the federal government, and as much as $10 when invested in enforcement activities. …At his confirmation hearings in January, Mr. Mnuchin bemoaned the cuts to the I.R.S. budget over the last seven years. The agency “is under-resourced to perform its duties,” he said, adding that further cuts “will indeed hamper our ability to collect revenue.” He also acknowledged that money spent on the I.R.S. is a good investment: “To the extent that we add resources, we can collect more money.” …his faith in the I.R.S. work force prompted one of his congressional interrogators to call it “refreshing” to hear someone “praise the employees at the Treasury Department.”

Yet should we give more money to a bureaucracy that has a big enough budget to finance this kind of reprehensible behavior?


The Internal Revenue Service has seized millions of dollars in cash from individuals and businesses that obtained the money legally, according to a new Treasury Department inspector general’s report. …individuals and businesses are required to report all bank deposits greater than $10,000 to federal authorities. Intentionally splitting up large sums of cash into sub-$10,000 amounts to avoid that reporting requirement is known as “structuring” and is illegal under the federal Bank Secrecy Act. But many business owners engaged in perfectly legal activities may be unaware of the law. Others are covered by insurance policies that don’t cover cash losses greater than $10,000. Still others simply want to avoid extra paperwork, and keep their deposits less than $10,000 on the advice of bank employees or colleagues. …The reporting requirements were enacted to detect serious criminal activity, such as drug dealing and terrorism.

I’m very skeptical that these intrusive anti-money laundering laws are successful by any metric, but I’m nauseated that the main effect is to give IRS bureaucrats carte blanche to steal money from law-abiding people.


The IRS pursued hundreds of cases from 2012 to 2015 on suspicion of structuring, but with no indications of connections to any criminal activity. Simply depositing cash in sums of less than $10,000 was all that it took to arouse agents’ suspicions, leading to the eventual seizure and forfeiture of millions of dollars in cash from people not otherwise suspected of criminal activity. The IG took a random sample of 278 IRS forfeiture actions in cases where structuring was the primary basis for seizure. The report found that in 91 percent of those cases, the individuals and business had obtained their money legally.

But here’s the part that’s most outrageous.

Innocent people weren’t the byproducts of a campaign to get bad guys. They were the targets.


…the report found that the pattern of seizures — targeting businesses that had obtained their money legally — was deliberate. “One of the reasons why legal source cases were pursued was that the Department of Justice had encouraged task forces to engage in ‘quick hits,’ where property was more quickly seized and more quickly resolved through negotiation, rather than pursuing cases with other criminal activity (such as drug trafficking and money laundering), which are more time-consuming,” according to the news release. In most cases, the report found, agents followed a protocol of “seize first, ask questions later.” Agents only questioned individuals and business owners after they had already seized their money.

In any event, the Trump Administration’s failure to deal with the problem seems to have emboldened the tax collection agency.


Despite promises to Congress, the Internal Revenue Service has yet to take advantage of a red-flag alert system designed to prevent it  from rehiring past employees with blots on their records, a watchdog found. …the Treasury Inspector General for Tax Administration found that more than 200 of 2,000-plus former employees “whom the IRS rehired between January 2015 and March 2016 had been previously terminated or separated from the tax agency while under investigation,” according to a report released on Thursday.

And keep in mind that IRS bureaucrats awarded themselves big bonuses in response to the scandal.

By the way, the problem isn’t limited to the executive branch.
Republicans in 2015 (after they had control of both the House and Senate!) decided that the best response to IRS scandals was to increase the agency’s budget. I’m not joking (and I’m also not happy). At the risk of being redundant, only the Stupid Party could be that stupid.

I sarcastically wrote four years ago that we should be thankful that Obama reminded the American people that the IRS isn’t trustworthy. Little did I realize that Republicans would fumble a golden opportunity to deal with the mess once they got power.

P.S. I’ve certainly done my part to explain why the IRS bureaucracy deserves scorn.
P.P.S. I don’t want to end on a sour note, so here’s more examples of IRS humor from my archives, including a new Obama 1040 form, a death tax cartoon, a list of tax day tips from David Letterman, a cartoon of how GPS would work if operated by the IRS, an IRS-designed pencil sharpener, two Obamacare/IRS cartoons (here and here), a sale on 1040-form toilet paper (a real product), a song about the tax agency, the IRS’s version of the quadratic formula, and (my favorite) a joke about a Rabbi and an IRS agent.

Posted by Rich Kozlovich at 5:08 AM