Oregon eclipse tourists greeted by anti-Semitic banners on overpass - OregonLive.com
A family driving north from California to see Monday's solar eclipse from Oregon found hatred on the freeway Saturday morning after they entered the northwestern state.  Beth and Michael Dershowitz and their kids saw the first banner south of Eugene. It said: "UNJEW HUMANITY."  They felt shaken, Dershowitz wrote in an email...........Continue Reading.....

Klayman: Ever Wonder Why Black Lives Matter, Sharpton, Jesse Jackson and Their Ilk Don't Stand up for Jews as Liberal Jews Stand up for Them? Answer: They Are Anti-Semites Like the Neo-Nazis They Claim to Hate!

Fox News host Jesse Watters lashed out at Democrats over the weekend for opposing statues of Confederate War "heroes."  In a controversial press conference last week, President Donald Trump defended people who marched with neo-Nazis and white supremacists in Charlottesville, Virginia to protest taking down Confederate War monuments. Trump argued that there were "fine people" at the march who only wanted to protect their Confederate "heritage.".........Continue Reading.....


Klayman: The Real Reason Is Likely That the President Feels That Fox News Has Turned Left and With a Few Exceptions Like Sean Hannity Against Him! 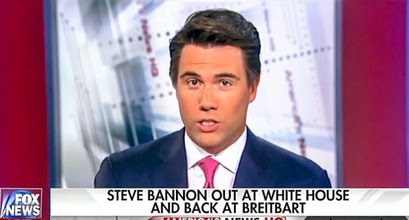 'Nobody will': Fox host says 'no member of the Trump administration' will come on air as presidency implodes

By David Edwards
Raw Story
August 20, 2017
Fox News host Leland Vittert revealed on Sunday that President Donald Trump had refused to let anyone from his administration appear on the network.  During a segment about Trump's outgoing chief strategist Steve Bannon, Vittert noted that only Trump surrogates from outside the administration would discuss the staff shakeup...........Continue Reading.....
Posted by Rich Kozlovich at 7:01 AM