Washington is filled with dishonest and self-serving analysis. Much of that shoddy output is driven by privileged groups seeking bailouts, subsidies, protectionism, or a tilted playing field.

But that’s not the only type of dishonest and self-serving you find in Washington. 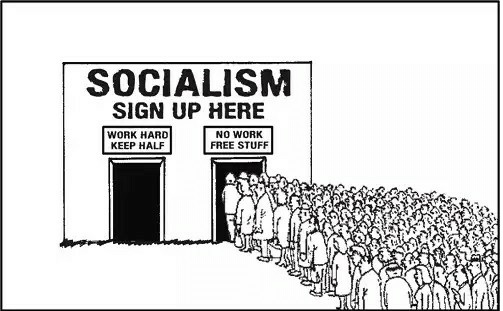 The micro-economic problem with that policy is that it reduces incentives to work – as illustrated by this Wizard-of-Id parody or this cartoon about socialism.

The macro-economic problem with that policy is that it’s part of a radical expansion in the burden of government that will make the U.S. more like Europe.

For today’s topic, though, I want to call attention to a recent report by the Democratic staff of the Joint Economic Committee. It relies on the sloppiest and most disingenuous analysis imaginable.

To recycle a term from 2015, let’s call it primitive Keynesianism.

The Treasury Department released information on how much money went to each state, which allows us to estimate the impact of the newly expanded CTC on local economies.

Using an estimated multiplier of 1.25—or how much additional spending each $1 in CTC payments will generate, as people use their funds to buy goods and services that in turn generate income for other people and businesses—implies that the expanded CTC will generate nearly $19.3 billion in spending in local economies each month. This increased economic activity is a boon to local businesses, creating jobs in communities across the United States.

Nowhere in the JEC “report” is there any acknowledgement that politicians can’t “inject” money into local economies without first taxing or borrowing the money from the private sector.

Honest Keynesians acknowledge that there’s no magic money tree. They know the government can’t put money in our right pocket without first removing from our left pocket.

So they make arguments about things such as the “marginal propensity to consume.”

I disagree with that argument, but at least the folks making that case are being ethical.

The JEC report, by contrast, is utter garbage.

But I guess we shouldn’t be surprised. They’re trying to sell very bad policy, so the staff have no choice but to produce nonsensical “research.”

Posted by Rich Kozlovich at 4:45 AM