Pelosi Spins Her 'Impromptu' SOTU Shredding and Places Blame on... the Media?

House Speaker Nancy Pelosi (D-CA) made waves when she shredded President Donald Trump's State of the Union address earlier this month. The next day we learned that she planned to make a scene, as evidenced by video footage. She confirmed her desire for attention during an exclusive interview with CNN on Saturday.


"Are you giving a signal that the Democrats will fight back hard, that you will not be constrained by what you believe to be insurgent behavior on the other side, and that this is, you know, a time to go mano a mano?" CNN's Christiane Amanpour asked.

"Let me say this: I had no intention of doing that when we went to the State of the Union. In fact, I was well into past the first third of it. I'm a speed reader so I was reading ahead so I knew what was there. I got past about a third of it and I thought, 'This is terrible,'" Pelosi explained.

According to the speaker, she decided to put little tears in the areas of pages she wanted to remember. Except each page had something she thought was "rememberable."............it's the presses fault that she had to resort to such actions...........We all knew this was premeditated. It was obvious Nancy was doing this for attention. ..........To Read More.... 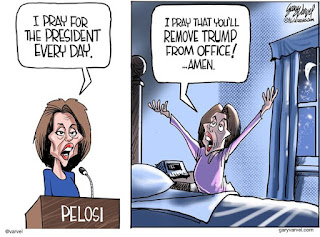 My Take - So, do I understand this correctly; Pelosi is having a crediblilty issue with the media?  But, how can the media question her integrity since they've unendingly told us she's a devout Catholic and she prays.  Right?

But we also know she's a big time promoter and defender of abortion, so, according to her Catholic faith, to which we're told she's so devout to, that's a mortal sin and therefore that makes her a heretic.  Right?

That bodes well the question: To whom does she pray?