How Radical Is Bernie Sanders?


Because of his extremist views, I often refer to Senator Sanders as “Crazy Bernie.” 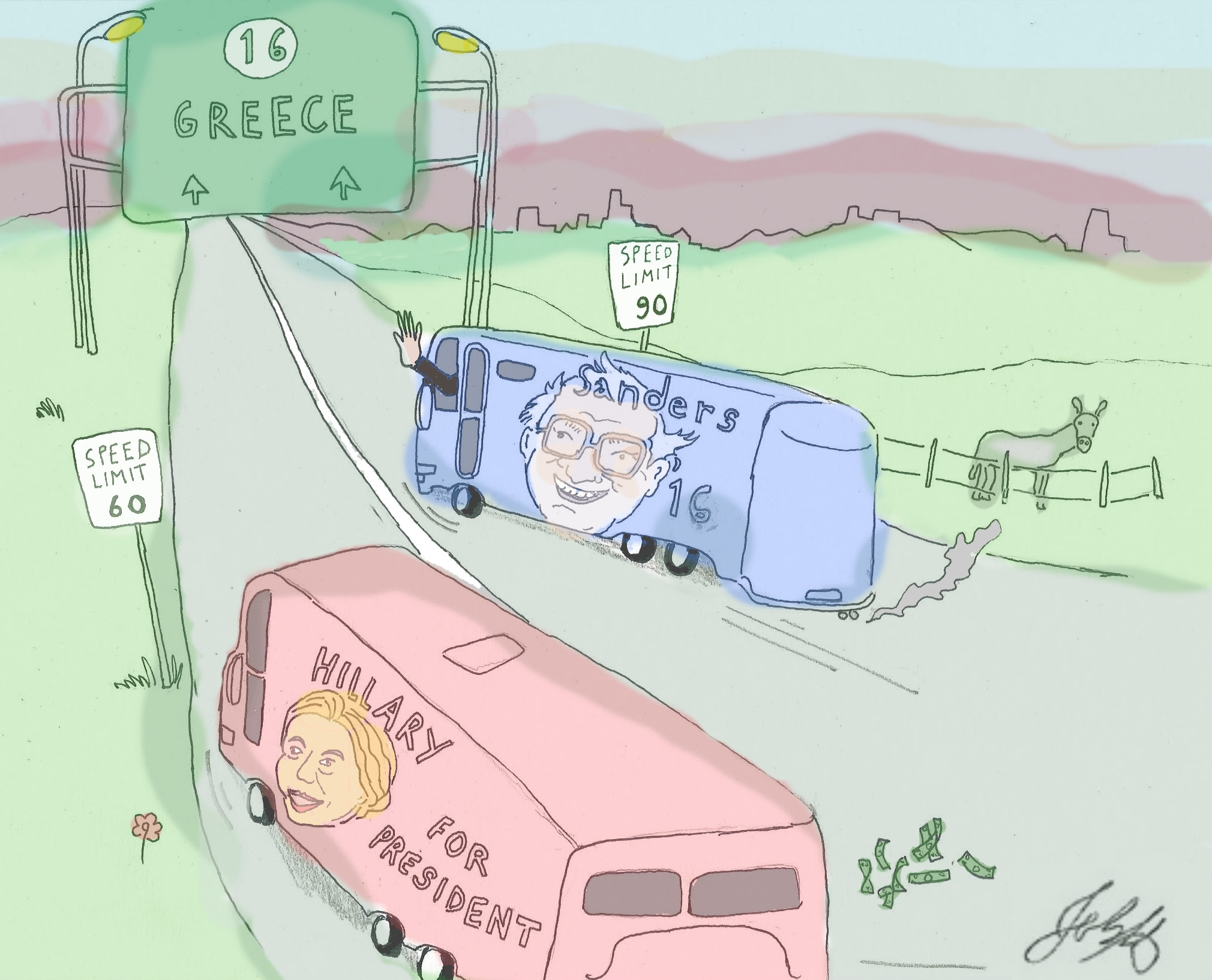 You can argue I’m being unfair. After all, I pointed out during the last campaign that his voting record in the Senate was almost identical to the voting records of Hillary Clinton and Barack Obama (his vote rating also was similar to supposed moderate Joe Biden when he was a Senator).

But that doesn’t necessarily mean they think the same or have the same agenda. As the cartoon illustrates, Bernie wants to travel at a faster rate in the wrong direction.

And it’s quite likely that he wants to travel farther in the wrong direction. And he may even want to get to a very unpleasant destination.

You don’t have to believe me. You can simply listen to what Bernie Sanders has said, in this video narrated by Maxim Lott.


And if that’s not enough, here’s a video from Reason that has more of Crazy Bernie’s extremist statements.


So what should we think when we examine Bernie’s past statements, review his voting record in Congress, and also analyze his current platform?

Is he a radical? Crazy? A Marxist? A democratic socialist? A socialist democrat? Some combination of all those options?

We obviously have no way of knowing what his real motives and thoughts are, but James Pethokoukis of the America Enterprise Institute speculates whether Sanders has learned anything.


What lessons have the events of the last half century taught Bernie Sanders? …He’s certainly seen a lot that would seem to have direct bearing on his ideology, especially the collapse of the Soviet Union…

Was he “very distressed” at the failure of the centrally planned Soviet economy? He certainly should have been, but only offers a condemnation of the authoritarian political system. …

No wonder he’d rather talk about Scandinavia as his socialist success story. Those tiny economies score well on just about every economic metric. But there’s more to them than universal healthcare and generous paid leave.

The Nordic model, according to a recent JPMorgan report, “entails a lot of capitalism and pro-business policies…” That’s stuff antithetical to the Sanders democratic socialist agenda. Indeed, the report concludes, “A real-life proof of concept for a successful democratic socialist society, like the Lost City of Atlantis, has yet to be found.”

For what it’s worth, Ryan Bourne points out that his agenda is more extreme than Jeremy Corbyn’s (which is not an easy task).


…some commentators are downplaying his socialist credentials, painting the veteran Senator as no more than a moderate social democrat. …To simply label him a socialist, without any caveats, is misleading. But it’s even more grossly misleading to suggest his “democratic socialist” ambitions stop at a Scandinavian-style welfare state. More redistribution is central to his agenda, sure, but he also proposes massive new market interventions, including the Green New Deal, a federal jobs guarantee, expansive price and wage controls…

Sanders’ platform goes far beyond any modern social democracy in terms of government size and scope. Indeed, his policies can only be considered moderate if some three-way lovechild of the economics of 1970s Sweden, Argentina, and Yugoslavia’s market socialism is the baseline. …compare Labour’s 2019 manifesto against the Sanders’ economic platform.

Doing so makes clear that Bernie is more radical than Corbyn on economics, both in absolute terms and relative to their countries’ respective politics. …Combined with national insurance, Labour’s top marginal income tax rate would have been 52%.

Sanders’ top federal income taxrate alone would be 52%, bringing a top combined top rate of around 80% once state and payroll taxes are considered. Sanders wants a new wealth tax too, another option Labour shirked. …where there are differences, it’s because Sanders is offering the more radical leftwing policies. He and Labour both proposed big minimum wage rises, national rent control, mandated employee ownership, and workers on boards, for example.

But where Labour proposed 10% worker ownership stakes in large companies, Sanders would mandate 20%… on the role of government, the declared economic platforms are instructive. Call it “democratic socialism,” or just plain old “interventionism,” Bernie Sanders is, in many respects, putting a more radical interventionist offer to the electorate than Jeremy Corbyn did.

Interestingly, social democrats from Nordic nations think Bernie Sanders is too far to the left.

“We were at a Sanders event, and it was like being at a Left Party meeting,” he told Sweden’s Svenska Dagbladet newspaper… “It was a mixture of very young people and old Marxists, who think they were right all along. There were no ordinary people there, simply.” …Lars Løkke Rasmussen, then the prime minister of Denmark, made a similar point in a speech at Harvard in 2015, when Sanders was gaining national attention. “I know that some people in the U.S. associate the Nordic model with some sort of socialism,” he said. “Denmark is far from a socialist planned economy. Denmark is a market economy”.

Giancarlo Sopo, opining for the Washington Examiner, worries that Sanders actually is an unrepentant Marxist.


Sanders is not the nice, Nordic-style “democratic socialist” he claims to be. At his core, Sanders is almost certainly an all-out Marxist. …The man has no business being anywhere near the Oval Office — not even on a guided tour. …Sanders has been an unabashed apologist for communism, an evil ideology with a body count of 100 million people dead in its wake. …

While people such as my grandfather were languishing as political prisoners in Cuba, Sanders said that he was so “excited” about the island’s communist revolution that watching JFK get tough on Fidel Castro made him want to “puke.” …The 78-year-old presidential candidate even honeymooned in the Soviet Union and came back full of praise for it. Some may not grasp how bizarre this was during the Cold War…

Sanders’s platform, which openly calls for nationalizing major industries such as higher education, healthcare, and even the internet, falls well outside the mainstream of U.S. politics and more closely resembles the central planning committees in Cuba and Venezuela.

Last but not least, in a column for the Wall Street Journal, Elliot Kaufman compares Sanders’ radical past with his modern rhetoric.


Campaigning for U.S. Senate in 1971, he demanded the nationalization of utilities. In 1973 he proposed a federal takeover of “the entire energy industry,” and in 1974 he wanted a 100% tax on all income above $1 million.

…He had also begun a dalliance with the Socialist Workers Party, a communist group that had followed Leon Trotsky. Mr. Sanders endorsed the SWP’s presidential nominee in 1980 and 1984, spoke at SWP campaign rallies during that period, and in 1980 was part of its slate of would-be presidential electors. …After three decades in Congress, he has settled on a populist vision that fits in on the Democratic left. In a major speech last June elaborating his idea of socialism, he cast himself in the tradition of Franklin D. Roosevelt…

He enumerated a series of positive rights—to “quality health care,” “as much education as one needs,” “a good job that pays a living wage,” “affordable housing,”… But he said nothing about state control over the means of production or Fidel Castro’s revolution.

So who’s the real Bernie Sanders?

I have no idea whether he still wants government ownership and control of the means of production (i.e., pure socialism with state-run factories, collective farms, etc). I also don’t know whether his past support for awful Marxist dictatorships meant he actually was a Marxist.

But I can confidently state that his current policy agenda is nuts.

A few years ago, I created a three-pronged spectrum in an attempt to illustrate the various strains of leftism.

I’ve decided to create a more up-to-date version. It shows that the Nordic nations are part of the rational left. A bit further to the left are conventional leftists such Joe Biden, Hillary Clinton, and then Barack Obama.

At that point, there’s a divergence, with Hitler and Stalin representing totalitarian socialism at the top and pure socialists (such as the U.K.’s Clement Attlee, who nationalized industries and sectors after World War II) at the bottom.

Without knowing what he truly thinks, I’ve put Bernie Sanders in a middle category for “Crazies.”
I suspect he has sympathies for the two other strains of leftism, but the real-world impact of his policies is that America would become an even-worse version of Greece (though hopefully not as bad as Venezuela).

P.S. Given that he’s now the leading candidate to win the Democratic Party’s nomination, and given that he’s ahead in some national polls, I’m very thankful that America’s Founders bequeathed to us a system based on separation of powers.

If Sanders somehow makes it to the White House, he’ll have a very difficult time pushing through the radical parts of his agenda. Yes, it’s true that recent presidents (both Obama and Trump) have sought to expand a president’s power to unilaterally change policy, but I feel confident that even John Roberts and the rest of the Supreme Court would intervene to prevent unilateral tax increases and nationalizations.

P.P.S. More than 10 years ago, I speculated that America’s separation-of-powers system would save the country from Obamacare and cap-and-trade. I was half right.

Posted by Rich Kozlovich at 2:53 AM