Trump Calls Out Sotomayor For Her Activism 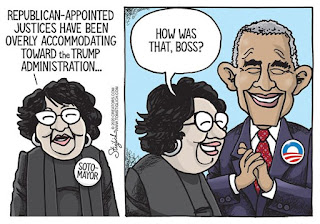 President Trump is right to call out Justice Sotomayor, and other unelected black robed social justice activist hacks who are masquerading as non-partisan upholders of the rule of law.

Remember when the United States Supreme Court carefully guarded their time-honored independence from the politics of the Executive and Legislative branches?

In those days, rarely were they ever seen or heard from outside of rendering opinions, and they kept those decisions based on the law, not politics. Those days are over thanks to judges who believe it is their role to act as a super legislature.

Recently Justice Sotomayor showed her disdain for President Trump in an exercise of judicial activism when in a dissenting opinion in Wolf v. Cook County, she accused the Court of putting a thumb on the scale in favor of the Trump administration by siding more times than not in his favor.......To Read More.....

My Take - For a sitting Supreme Court Justice to openly and publicly criticize white justices for bias is unheard of.  Yet the most consistently original constructionist in the court is Clearance Thomas.  A black justice.

Years ago I read WHORES: Why and How I Came to Fight the Establishment by Larry Klayman.  I find him a bit odd, but one thing came out clear as a bell in this book, and time has been showing this to be true; the federal judiciary is filled with political hacks.

A wise Latina?  She claims there's no real definition for wise, well, again she's wrong.  Wisdom is the practical application of knowledge and understanding.  Wise decisions aren't based on the philosophical flavor of the day, especially leftist flavor's of the day since they're a changable as the latest ladies fashion.

Wisdom is based on truth.  Truth is the sublime convergence of history and reality.  Everything were told has a historical foundation and context.  Everything we're told should bear some resemblance to what we see going on in reality.  If want's presented to us fails in either of those categories, it's wrong.  Saying it's right may be politically comfortable, but it isn't wisdom.

One more thought.  Who besides Sotomayor ever said she was wise?
.
Posted by Rich Kozlovich at 2:32 AM

Email ThisBlogThis!Share to TwitterShare to FacebookShare to Pinterest
Labels: Sotomayor