Before Sonia Sotomayor, the “wise Latina” as she once referred to herself, was nominated by President Barack Hussein Obama in May 2009 and confirmed as Supreme Court justice that August, her legal expertise and judgment were being questioned by those noting her high reversal rate
high reversal rate by the court she was being elevated to:

Three of the five majority opinions written by Judge Sotomayor for the 2nd Circuit Court of Appeals and reviewed by the Supreme Court were reversed, providing a potent line of attack raised by opponents Tuesday after President Obama announced he will nominate the 54-year-old Hispanic woman to the high court.

“Her high reversal rate alone should be enough for us to pause and take a good look at her record. Frankly, it is the Senate’s duty to do so,” said Wendy Wright, president of Concerned Women for America.

Well, the Senate gave her a pass, with Sen. Lindsey Graham, who mentions it frequently, being the sole Republican on the Senate Judiciary Committee voting to advance her nomination to the full Senate for a vote. Not giving her a pass these days is Sen. Ted Cruz (R-Texas), who has noted the double standard and bad law she applied in criticizing colleagues Neil Gorsuch and Brett Kavanaugh for essentially being “Trump judges” by fighting the incessant lower court injunctions applied nationally to block President Trump’s policies and what the American people elected him to do, as reported in Texas Lawyer magazine:


Sen. Ted Cruz used Tuesday’s Senate Judiciary Committee hearing on universal injunctions to criticize Justice Sonia Sotomayor for her dissent, accusing a “handful of judges” as acting as part of the “resistance movement” against the Trump administration in blocking its policies.

He compared her opinion, which he noted no other justices signed onto, to “an arsonist complaining about the noise from the fire trucks.”

“It is hard to say what is more troubling: that the government would seek this extraordinary relief seemingly as a matter of course, or that the court would grant it,” she wrote.

My Take - The article points out Sotomayor's hypocrisy, and her real concern, which is a second term as by Donald Trump as President.  Currently there are, according to Wikipedia, 870 authorized Article III judgeships: nine on the Supreme Court, 179 on the courts of appeals, 673 for the district courts and nine on the Court of International Trade. 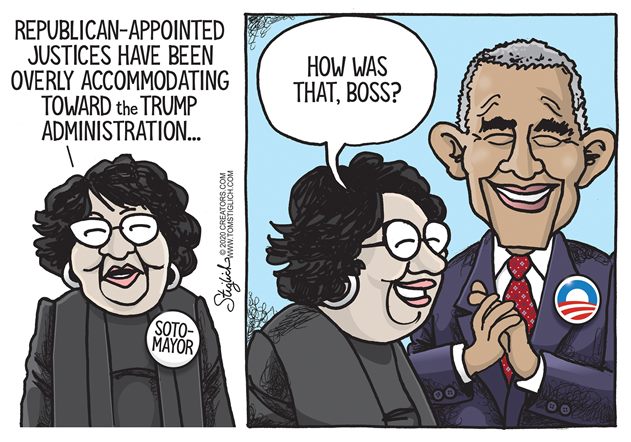 Trump has now appointed 187 judges to the federal courts and even the 9th district, which has been notoriously left wing, is now deciding cases on the basis of law rather than their own leftist ideology.  Trump could potentially appoint another 200 or more if elected, including another Supreme Court Justice.

As for Sotomayor, has anyone else in the world ever described her as wise?

Yet Sotomayor fashions herself as a "wise" Latina, while history demonstrates she's either a corrupt or an incompetent jurist, and a disgrace as a human being.  The perfect Obama appointee.

Posted by Rich Kozlovich at 6:49 AM