Last week, I wrote about a new study which estimates that Biden’s fiscal agenda of bigger government and higher taxes would reduce economic output by about $3 trillion over the next decade. 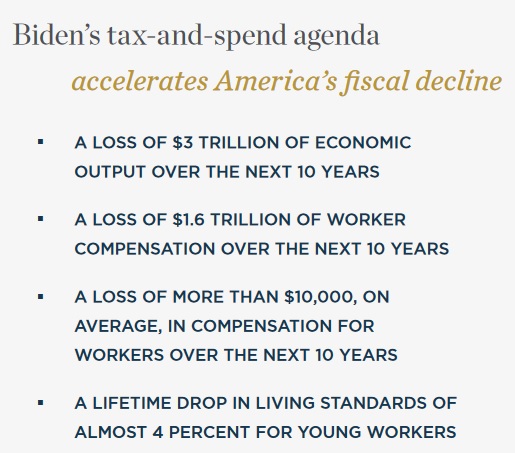 Perhaps more relevant, that foregone economic growth would translate into more than $10,000 of lost compensation per job. And a lifetime drop in living standards of more than 4 percent for younger people.  And these numbers are based on research by the Congressional Budget Office, which is hardly a bastion of libertarian analysis.  The Biden White House has a different perspective.

How different? Well, the President actually claims that expanding the burden of government won’t cost anything.  I’m not joking. Here are some excerpts from an article in the Washington Post by Seung Min Kim and Tony Romm.

President Biden promised Friday that his sweeping domestic agenda package will cost “nothing” because Democrats will pay for it through tax hikes on the wealthy and corporations… The remarks were an attempt by Biden to assuage some of the cost concerns pointedly expressed by the moderate Democrats about the size of the legislation… The total spending outlined in the plan is $3.5 trillion… “It is zero price tag on the debt we’re paying. We’re going to pay for everything we spend,” Biden said in remarks from the State Dining Room at the White House.

…this is a novel way of estimating the cost of something. That eye-wateringly expensive dinner you had last week didn’t really cost you anything because you paid for it. …You could have used the money to invest in your children’s college fund. You could have paid off some of your credit card bill, the debt on which has quadrupled in the last year. But you chose instead to blow it on a few morsels of raw fish and a couple of bottles of 1982 Château Lafite Rothschild. Don’t worry, It didn’t cost you anything.

Biden and his team definitely deserve to be mocked for their silly argument.

For all intents and purposes, they want us to believe that there’s no downside if you combine anti-growth spending increases with anti-growth tax increases – so long as there’s no increase in red ink.

But there’s actually a fiscal theory that sort of supports what the White House is saying.

For what it’s worth, all four of those statements are correct.

But the theory is nonetheless wrong because it elevates one variable – fiscal balance – while ignoring other variables that have a much bigger impact on economic performance.

For instance, the Congressional Budget Office at one point embraced this approach – even though it led to absurd implications such as growth being maximized with tax rates of 100 percent.

For further background, here’s a table I prepared back in 2012.

The White House today is basically embracing the IMF’s “austerity” argument that deficits/surpluses are the variable that has the biggest impact on growth.

P.S. Folks on the left must get whiplash because some days they embrace the Keynesian argument that deficits are good for growth and other days they argue that a big expansion of government will have zero cost because there is no increase in the deficit.

P.P.S. The folks on the right who focus solely on tax cuts also are guilty of elevating one variable while ignoring others (humorously depicted in this cartoon strip).

Posted by Rich Kozlovich at 8:42 AM