Global Warming Predictions, Especially About the Future, is Really Hard.

"There is only one possible conclusion regarding the reliability of climate predictions. Outspoken catastrophic-minded climate scientists and high-ranking officials don’t have a clue about future climate and its consequences, and are inventing catastrophic predictions for their own interest. Government policies should not be based on their future predictions.  Another conclusion is that studies and opinions about future climate are heavily biased towards negative outcomes that fail to materialize, while ignoring positive outcomes that are materializing."

By Rich Kozlovich
The title to this article has been used and paraphrased over and over again, and rightly so because prediction really is hard.  However, it appears the most celebrated scientist to take note of it was, Niels Bohr, a Danish physicist (1885 - 1962) who simply stated what intelligent people understand.
"Prediction is very difficult…especially about the future".
And I'm guessing of course, but I've wondered if he wasn't jabbing his more loquacious colleagues looking for notoriety. Not an uncommon problem now, and I'm sure then. The difference is these days they can predict something amazingly stupid and it's around the world before anyone can refute it. 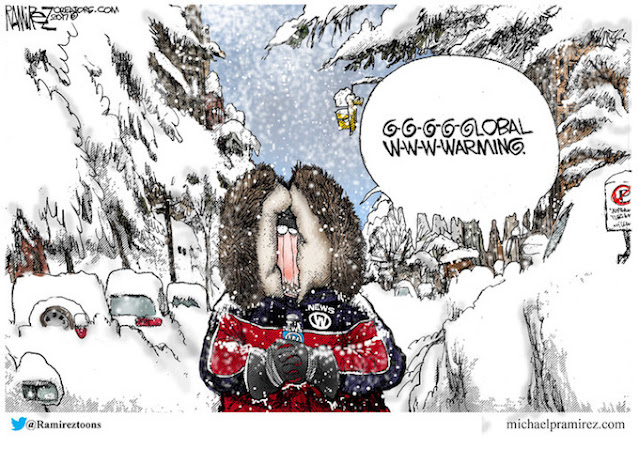 In an article entitled, Al Gore’s Prediction For December 2017 Was Way, WAY Off The Mark, Andrew West outlines some of the scare mongering spouted by The High Priest of the Church of the Warming Globe, Al Gore.  Scare mongering did I say?  Yes, but I think that's putting it mildly for what Gore has done.  I would add lying, profiteering, scamming and fraud to that list.  West goes on to say:


"Just how bad were some of Gore’s predictions?  Well, for starters, he believed that the North Pole would be completely devoid of ice by today."

And in the process he's managed to enrich himself immensely.  Apparently he didn't think the emergency was so great he should stop trying to get more money, or not live in massive energy sucking "$9 million beach front home in Montecito, [California]. Guess Al is not really afraid of sinking into the sea."

And we're shocked his predictions have been wrong?

Here's Anant Goel's discription of this massively expensive, disgustingly fraudulent scam by the world's biggest con artist of all time:


"Al Gore has a meltdown and despairs as his climate change alarm-ism fails with the general public. His worst fears are now being realized as he fails to become the planet's first climate Billionaire. This is my dream - that maybe one day we will get to see Al Gore grilled like this on the hundreds of millions of dollars he has made out of Global Warming nonsense.........Global Warming is on its way to becoming a hundred trillion dollar scam. The New World Order politician’s goals are to have total power and control over all the people. These politicians are using powerful human motivators in climate change: Fear and Guilt."

Dr. Don Easterbrook is a climate scientist who stated - seven years before Al Gore and the UNIPCC  shared the 2007 Nobel Peace Prize on their Global Warming predictions - stating the world would be cooling, not warming, and he was right.  As for these predictions he stated:


“When we check their projections against what actually happened in that time interval, they’re not even close. They’re off by a full degree in one decade, which is huge. That’s more than the entire amount of warming we’ve had in the past century. So their models have failed just miserably, nowhere near close. And maybe it’s luck, who knows, but mine have been right on the button,”

Then there's loony Prince Charlie.  It's no wonder the Queen of England keeps holding on to the throne.  In July of 2009 he predicted we only have 96 months to save world from burning up.  Well, there's only six months left to his prediction.  I wonder what the odds on a bet would be in Las Vegas that his prediction is going to fail?

In an effort to justify his loony ideas this guy - whose lived a life of luxury and privilege while never making any of the changes in his life he's been demanding of others - claims "the price of capitalism and consumerism is just too high"........ Blaming capitalism should be the first warning sign to anyone who pays attention to these loony leftist greenies there's something wrong with what they're saying.

But these two loons - albeit the most famous of the Sky is Falling crowd - are not alone.   The number of loons and loony predictions of a global warming catastrophic are Legion.

A massive list of failed predictors and their predictions appeared on Anthony Watts' website Watts ip With That, in the article, Some Failed Climate Predictions, which are far too numerous to list here, so please take the time to peruse this amazing list.

We have to get this once and for all.  Anyone promoting Anthropogenic Climate Change is either deliberately being fraudulent, a semi-pagan secular green fanatic, or is as dumb as tree moss.

I think that sums it up nicely.  Have a good day!
Posted by Rich Kozlovich at 6:56 AM