﻿
Barbara Demeneix, a team leader at The Paris Natural History Museum, certainly has credentials. She earned a Ph.D. in endocrinology and physiology from the University of Calgary, published two books, more than 170 papers, and received a number of awards for her work primarily focused on thyroid function.


﻿
That's why it's hard to understand, with such training and experience, how Demeneix became one of the head counselors in the "Endocrine Disruptor Camp," which all but guarantees a certain amount of nuttiness.  Once again that camp does not disappoint chemophobes and homeopaths who think any trace of any chemical does something important. This time she claims we should stop using fireworks because they might cause autism. Hoo boy.

Her reasoning, such as it is, is this:
The science is so wrong that it would take me until July 4th to properly explain how nuts it really is. Instead I will be brief and note that events are linked to other events all the time. Sometimes they are real (cigarette smoking causes cancer) and sometimes they are stupid, like that touching receipts with BPA will give you man-boobs. (2) One of the most famous phrases in toxicology is "the dose makes the poison" but Demeneix seems to have forgotten it, so it's no surprise she conveniently also forgets a close second: correlation is not causation.

If we accept Demeneix's claims on fireworks and autism we also should accept this graph: 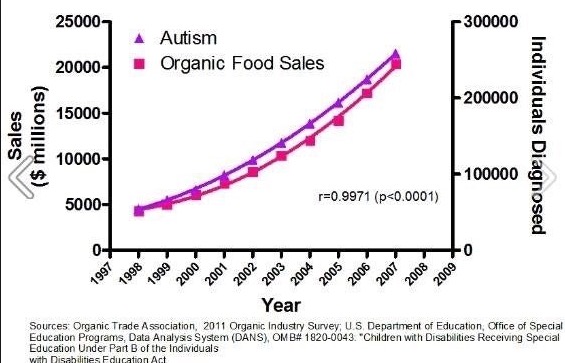 The sale of organic foods correlates perfectly with the increase in the number of diagnoses of autism. The r value (in this case 0.9971) is a measure of how good the correlation is. It doesn't get any better than this. It is virtually perfect as shown by a table from an article  "How To Interpret a Correlation Coefficient R."
So, the correlation between organic foods and autism is perfect.

It's still wrong. It is so obviously wrong that Environmental Working Group, one of the Three Stooges of the science world, know it is nonsense. If you examine enough pairs of separate trends graphs like this will turn up simply by coincidence. You don't draw conclusions based on correlation alone. You will screw it up way more times than you'll get it right.

But Demeneix doesn't want to get the science right, she wants to help her friends at Environmental Health News.  It's easy to see if we look at her other statements.


"But while they are a visual delight, fireworks are anything but innocuous. Research has shown that they can cause significant air pollution and the residues they leave behind – including strontium, barium, cobalt and lead – can be highly dangerous."

OK, let's enter this universe. Take a look at the photos below and try to tell me with a straight face how fireworks are a significant contributor to air pollution (and strontium poisoning ????).

Obviously the city on the far left is the U.S., with some of the cleanest air in the world. The two on the right are where actual air pollution is. Stopping fireworks is not going to matter there.
But she claims a reason for her madness.


"A less-known fact is that fireworks contain significant amounts of perchlorate, a chemical of particular concern because of its potential effects on foetal brain development."

Dozens of chemicals have effects on brain development if the dose is high enough, and those are just the chemicals you can find in organic dinner. But the dose is not high enough, even among people who work with perchlorate much less who see fireworks once a year. A CDC toxicology profile on perchlorate shows this, if Demeneix ever bothered to read it. If thyroid hormones are being affected it's sure not obvious from this document (emphasis mine):


Endocrine Effects. No significant effects on serum levels of TSH [throid-stimulating hormone], total serum thyroxine (TT4), T3, or free thyroxine index (FTI) were found among the ammonium perchlorate workers studied by Gibbs et al. (1998). The mean airborne concentration of perchlorate to which the workers were exposed ranged from 0.02 to 0.63 mg/m3 . The researchers estimated that exposure to airborne perchlorate provided an average cumulative lifetime absorbed dose of up to 0.01 mg perchlorate/kg/day for high-exposure workers. Comparison of pre- and post-shift serum thyroid hormone measurements for individual workers failed to find any evidence of a transient effect associated with daily exposure.
Toxicological Profile For Perchlorates, CDC

Occupational exposure is a key test for determining real harm. If people who work every day with perchlorate are not affected kids are not going to be harmed by a fireworks show.
She then claims


"The lack of either iodine or thyroid hormone during early development, especially the fetal and perinatal periods, results in lower IQ as well as an increased risk of neurodevelopmental disease such as autism spectrum disorder (ASD) or attention deficit hyperactivity disorders (AD/HD)."

It's hard to trust anything the endocrine disruptor activists say but autism is multifactorial, so even if this is true, where is the evidence that watching fireworks has any effect on thyroid function?
There isn't any. That doesn't stop her from declaring it omipresent and therefore dangerous (emphasis mine)


"Fireworks are by no means the only source of perchlorate in our environment. Because it’s highly soluble in water and stable, perchlorate can contaminate croplands and be taken up by vegetables and fruits grown there. Foods with the highest documented levels of perchlorate include melons, dairy and leafy vegetables such as spinach and lettuce... But both cows-milk and soy-based infant formulas have been found to contain significant levels of perchlorate as well. Yet soy products are not [an] option, as they contain yet another compound that interferes with thyroid hormone production, genistein. So, soy-fed infants and children are doubly at risk."

Okay, if any of this were accurate we'd all be long dead. Since trace amounts of perchlorate can be found everywhere on earth (Venus too. I think), we can eat nothing, drink nothing and maybe even breathe nothing. And she is also scaring the environmental demographic that is willing to believe her about endocrine disruption - vegetarians and supplement buyers. Genistein is a polyphenol antioxidant found in soy and has been touted as a supplement to prevent half the diseases on earth.

Genistein is an estrogen mimic too. So if half the women in New York are consuming something that will screw up TWO of their endocrine functions, how are they all still walking around?
There is more silliness in Demeneix's article. I haven't even scratched the surface. But the take-home message is that she just hates chemicals and is a master at using the tired old endocrine disruptor canard to scare you about everything and nothing.

It's too bad that Independence Day can't give us independence from ridiculous pseudo-science like this. Still, I promised in the title I could link autism to football touchdowns. So here is what Demeneix can use for her next article:
Maybe touchdowns should be banned. Field goals do not disrupt your endocrines. But they sure are boring.

(1) This is utter nonsense. The amount of perchlorate that one will be exposed to from watching a fireworks show is vanishingly small.
(2) See: Why I Don't Write About Pottery From the Ming Dynasty
Posted by Rich Kozlovich at 5:09 AM