Thousands of Turkish troops poured into the northwestern Syrian province of Afrin in recent days. Turkish Prime Minister Tayyip Erdogan promised that the deployment was only the start of a broader effort that would see Turkish forces sweep the entirety of northern Syria – all the way to the Iraqi border – in order to purge Syria of forces hostile to Turkish interests.

Under pretty much any circumstances, the entry of a new power into a multisided melee that involves the Syrian Alawite leadership, the Lebanese militias, the Iranians, the Russians, the Americans, the French and dozens of local warlords when that new power alone has more armed combatants within arm’s-reach than all the other factions have in-theater put together would be notable. But the kicker is that this is only the first of three relevant facts.

The second is that the world has forgotten just what “Turkey” means.

The Ottoman Empire’s fall in the First World War (1914-1918) was far more than a mere military defeat. For much of the previous millennia, Istanbul had been the world’s economic and cultural capital – the crossroads not just between Europe and Asia and the Black Sea and the Mediterranean, but between everything that mattered. At war’s end the country suffered not just an economic depression and loss of nearly all its imperial territories, but crushing humiliation on every conceivable level. At one point it got so bad that dysfunctional, tribal, underequipped Greece even staged a brief invasion. It would be as if the United States didn’t just lose a war, but had all its territory west of the Appalachians amputated and divided among other countries, and then somehow the Puerto Ricans marched on Atlanta.

In the aftermath, Turkey’s response was to close itself off from the world, lick its wounds and struggle to forge a new identity. Two factions eventually emerged as heirs to the empire: a secular, military-rooted group that sought integration with Western structures; and a mildly Islamist, more Orientalist faction who saw advantages of the non-Western way of doing business whether that be the centralization of the Soviet/Russian system or the dynastic, clan-based communities of the Arab world. Put simply, one faction favored the military and economic patterns of the West, while the other preferred the cultural and political styles of the East.

While this soul-struggle ebbed and flowed through the Cold War decades, the Turks realized they were simply too broken to stand on their own. One result was reluctant inclusion into the NATO alliance. Another was a partnership with the Europeans that stopped short of formal European Union membership. But beyond those narrow topics, the Turks kept to themselves. 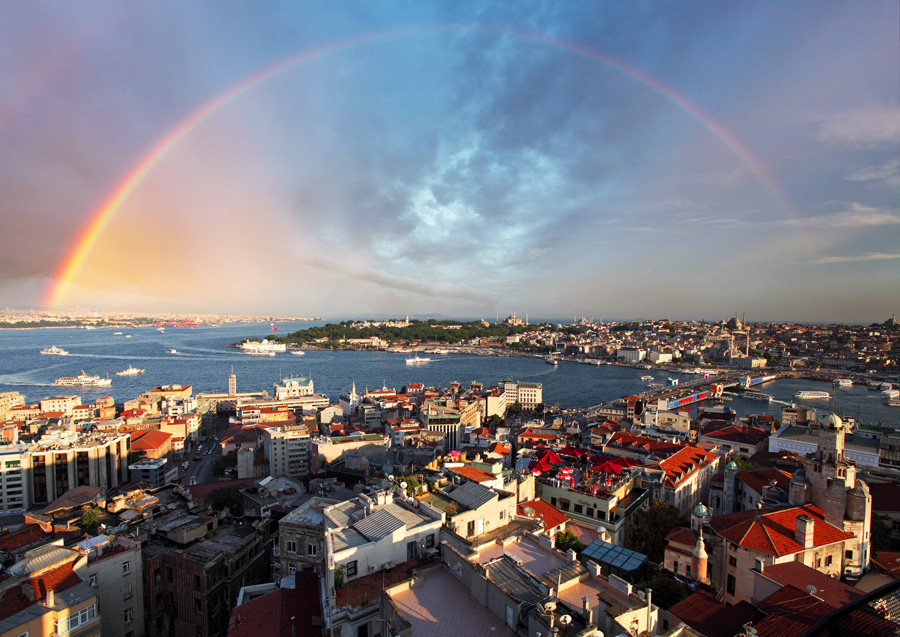 There are a few thoughts to take from this:

1.Even in times when the Turkish soul was most divided against itself, both factions maintained a firm belief in the unique nature of Turkishness – a self-identity that is far less compromising than that of most peoples. Even the most ardent pro-Western secularist never saw Turkey being the same as the West, just as even the most Islamist Orientalist always considered Turkey as being apart from (and above) the Arabs, Persians and Russians. American commanders operating from Turkish bases consistently and unequivocally warned their troops that on Turkish soil you follow Turkish law or else you end up in a Turkish prison and there’s not a damn thing that American military lawyers can do about it.

2.Since 2000 the Islamists/orientalists haven’t simply won the culture contest, they’ve won so decisively they’ve eliminated the secularists from nearly all walks of Turkish life. Ruling Turkish Prime Minister Erdogan has also purged the ranks of the Islamists themselves so that his particular version of Orientalism will remain the ruling ideology of Turkey for decades to come. Turkey is once again of a single, consolidated, confident voice. If you don’t like its tone and timbre, well, you missed your opportunity and you’ll have to wait for the wheel of history to turn once more. Last time that took a century.

3.Turkey in general and Erdogan in specific are only now making their first steps as an independent power in their neighborhood. In a neighborhood made up of the Balkans, the Caucasus and the Middle East the margin for error is thin, the opportunities for missteps are omnipresent, and complications that will take decades to sort out are all but guaranteed. Between the neighborhood’s volatility and the twin, potent egos of Turkey as a nation and Erdogan as a leader, Turkey has become an erratic force in the regional geopolitic. Much as America’s remoteness from the Eastern Hemisphere coupled with its naval prowess means that American power doesn’t matter until suddenly it does, Turkey’s century of self-imposed isolation combined with its 600,000-strong army means that the Turks are roundly ignored until they suddenly and unexpectedly show up.

As they are now in Syria.

The final issue is that the Syrian war is no longer some tangential issue for the Turks. It has been elevated to an issue of national survival.

Part of Turkey’s post-WWI cultural reflection was a dismantling of its old multi-ethnic imperial Ottoman identity and its replacement with a far narrower emphasis on ethnic Turks specifically. If you’re Turkish this of course makes perfect sense. If you’re of one of the few other nationalities that live in Turkey, however, it is somewhat problematic. The largest of these “other” groups are the Kurds, who started out as second-class citizens (at best). Over the decades some Kurds didn’t simply resist, they revolted, with the more militant ones forming the PKK – a quasi-terror rebellion group under the leadership of one Abdullah Ocalan. Conflicts between the Turkish government and Ocalan’s PKK have claimed tens of thousands of lives.

Another armed Kurdish faction – the YPG – is active all along the Syrian side of the Turkish-Syrian border. They are by far the most competent fighters battling the Syrian regime in the civil war, and have often served as reliable proxies for American efforts against both ISIS and Damascus. The YPG has proven itself united, capable, loyal and ultimately effective at breaking ISIS not simply in the Syrian periphery and ISIS core territories, but right up to and including ISIS’ capital at Raqqa. The YPG is the centerpiece of America’s Syria strategy, and American success against ISIS would have been fundamentally impossible without the YPG. 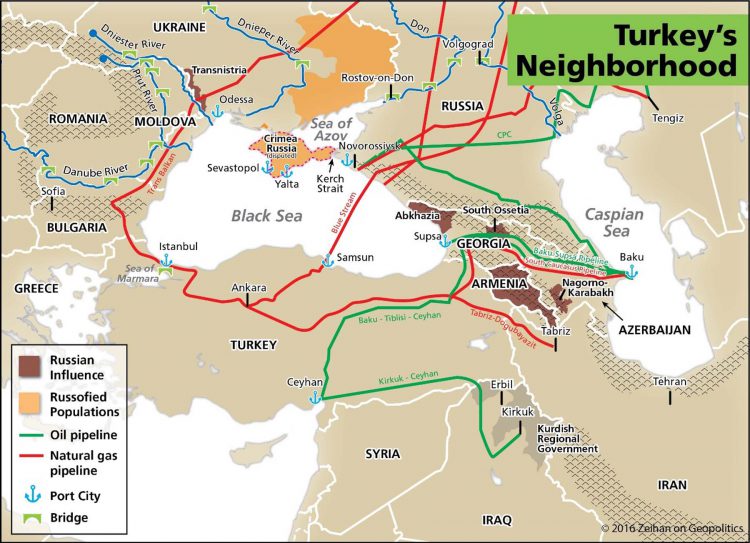 The fact that the YPG is Kurdish and that YPG’s presence is right on the Turkish border was enough to make the Turks nervous, but YPG actions at the Raqqa battle chilled the Turks to their core. At Raqqa’s moment of liberation from ISIS, YPG fighters replaced the ISIS flag with the personal standard of none other than Ocalan himself.

Turkey cannot and will not tolerate a PKK-leaning Kurdish statelet on its border, and so Turkish troops have rolled across the border.

They haven’t moved alone. Turkey has mobilized every Syrian faction over which it has influence. Beginning in late 2016 the Turks assumed functional control over the Free Syrian Army, transforming a ragtag coalition of local Arab and Turkmen fighters into a direct Turkish proxy. The “Army” is operating hand-in-glove with Turkish forces… against the American-backed YPG.

Turkey is now not only the most powerful faction in the conflict, it is putting its back into the war, and it is motivated by a deep-seated fear to the coherence of its national identity. This is not the stuff of which compromises are made. And the Turks are now not just standing against the Americans, but literally firing artillery into the very heart of the Americans’ entire Syria strategy.

It is my belief that the NATO alliance ended back in 2017. It is a position which I’ve seen no reason to amend, but what is occurring now in Syria is a whole other level. Two NATO “allies” are not simply having a disagreement, but they are shooting at one another’s assets in a conflict that one of them defines as an existential crisis.

Many have commented that a meaningful breach between the Americans and Turks would spell disaster in Washington’s ability to manipulate the Middle East and hold Iranian and Russian power at bay. I don’t necessarily disagree with those concerns, but they miss the broader issue:

Turkey, the Middle East’s most powerful player who is far more economically and militarily potent than Iran and who could even stand up to the Russians in a fair fight, has returned to the world as a fully independent player. With the Russians, Turks, Iranians and Saudis all gearing up for a battle royale, the United States has already achieved everything any sane Middle Eastern policy could ever hope for: The region is divided against itself and will marvelously self-contain for decades.

The United States has no meaningful interests in Syria. Israel is safe. Iran is locked into a combat it cannot possibly win. The United States no longer has a stake in the region’s oil. And the newest power player – Turkey – just made an open-ended commitment to a multi-sided land war. There has never been and likely never will be a better time for the Americans to disengage.

So what’s the problem again?

Posted by Rich Kozlovich at 6:40 AM