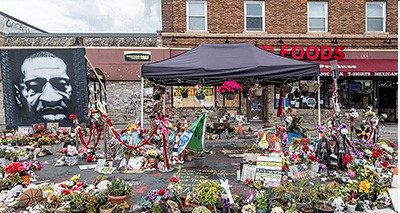 On June 4, 2021 Jared Taylor published the article,  George Floyd One Year Later with an accompanying video saying:
We are witnessing mass delusion of historic proportions. The death of George Floyd has given rise to one of the worst mass delusions in American history – maybe world history. Here are his arrests, going back to 1997. His first was at age 23, and during the next 10 years he was in and out of the big house *eight* times, mostly for larceny and drugs.

Floyd’s final crimes were taking illegal drugs, passing counterfeit money, and resisting arrest. He struggled persistently with police officers and flopped down on the street rather than get into a cop car.....Even more absurd – and this is at the heart of the mass insanity – is the idea that this was a vicious act of racism.

At this point Floyd, and thug, a criminal and a all round lousy citizen has become deified by blacks and leftist disgustingly using race as an issue.  George Floyd had ‘violent criminal history".

Where Floyd died is now called George Floyd Square, where police aren't allowed and whites have to grovel when they go there.

As of last week the "Official George Floyd Memorial Fund" on the GoFundMe site surpassed $13 million and broke the record for the highest number of individual donations on the crowdfunding site", with more than 500,000 donations from 145 countries.  Murals of him have appeared in cities all over the world, and scholarships have been set up in universities all over the nation, and President Biden and Vice President Harris have also grovelled to this false narrative.

Here's the real impact of this fraud being perpetrated on America, Leo Terrell: Blame ‘The George Floyd Effect’ for Shoplifting Spree in San Francisco, by Craig Bannister saying:

Store owners “cannot win in California, because criminals are allowed to commit crimes and prosecutors are looking the other way” due to “The George Floyd Effect,” former Civil Rights Attorney Leo Terrell said Thursday. In an interview with Fox News, Terrell discussed the shoplifting sprees plaguing San Francisco businesses – including a viral video of a thief at a Walgreens filling a trash bag with merchandise and leaving while a security guard stood by and watched..........

Terrell went on to say:
One reason store owners in California can’t win,.....if items are out in the open on shelves, they’re easy to steal – but, if they’re behind a display window, the business is accused of being racist:
And this pattern of vilifying police and ennobling thugs is continuing.  Winston Smith engaged police, who were attempting to arrest him on an outstanding warrant, in a gun battle and loses, and now protesters are attempting to make him an icon and create a "zone" of some kind in his honor.
All these thugs and criminals who are resisting arrest and attacking the police, and are getting themselves killed in the process, are being extolled as the heroes black children should be looking up to as examples.   Couple that with the propaganda of Critical Race Theory and we have a disaster of major proportions in the making.
The nation's cities are falling into a pit of black racism that's proving to be a disaster for the nation, but what I just don't understand is why blacks, who are suffering far more by all the actions of Antifa, BLM and the Race Industrial Complex, and the thugs they're promoting than are whites, are supporting it!
Daniel Greenfield has run an eight part series on racist mayors, black and white, who've embraced this BLM Marxist mentality, and the consequences to the black community is absolutely dire. Part eight deals with the racist mayor of  Jackson, Mississippi, Chokwe Antar Lumumba, who intends to turn Jackson into the "most radical city in America".  I guess being unable to provide safe drinking water is part of that plan, and the black community still wants him as their mayor.  His answer?  In spite of the fact Jackson has been under black Democrat control for 25 years, it's the fault racism, not his incompetence or the insanity of the Democrat party.
All the progress for equality made from 1964 was erased when Obama became President.  He and his radical Marxist myrmidons, are leading the nation into a level of racial tension and instability that I fear will eventually lead into a very real national race war.
I invite you to read my commentaries:
Posted by Rich Kozlovich at 6:30 AM