Obama and the Broken Nation He Made Come Of Age

Barack Obama turns 60 over the summer. The AARP cover with Barry posing next to a basketball and a shelf of bestselling non-fiction books he hasn’t read can’t be too far away. 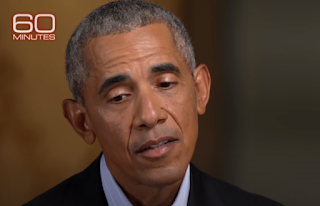 Once the symbol of youthful hipness, the former boss of Hope and Change now lectures “young people” on what they should be doing. His legacy is being carried forward by 78-year-old Biden and the 81-year-old Pelosi. That’s above the average age of 80 of the House Dem leadership.

The average age of the Biden cabinet is two years older than President Trump’s cabinet.

The gerontocratic technocracy uses AOC as its younger foil, but she’s been a stalking horse for Bernie Sanders who will hit the big 80 in the fall. The big donors behind the American Left are even older with George Soros due to hit 90 the same month Obama gets to 60. The even bigger reservoirs of cash flowing into the leftist machine are coming from the foundations of men who were born in the 19th century like Henry Ford, John D. MacArthur, and John D. Rockefeller.

That’s about right for a 19th century ideology whose followers keep trying to make it look young.

Youthful leftism is anarchic. It’s CHAZ, BLM, and Antifa. It’s open air heroin markets, smashed store windows, and political assassinations. Turning that anarchy into collectivism requires hysterical propaganda and rallies that appear anarchic, but are actually tightly controlled, ideas that seem edgy, but are actually the work of men who were born during the age of the steam.

If you think Bernie’s old, Karl Marx celebrated his 203rd birthday in May.

Obama’s policies have aged as badly as Marx, Biden, or their front man. But instead of moderating as they grow older, they only grow more radical. Obama equivocated on gay marriage, while Biden entirely erases the existence of women by calling them “birthing people”. Obama covertly weaponized the government against conservatives, while Biden is doing it openly. Everything from election rigging through H.R.1 to indoctrinating every government employee with critical race theory is happening more openly and blatantly under Biden.

Making tyranny look like freedom requires hefty doses of chaos and outrage that make it appear that the system is being broken when it’s actually being built up. Or as George Orwell wrote in 1984, “One does not establish a dictatorship in order to safeguard a revolution; one makes the revolution in order to establish the dictatorship.” The revolution is the thing it’s revolting against.

The end of history keeps arriving only to vanish like a mirage when the youth reach for it.

"This was the moment when the rise of the oceans began to slow and our planet began to heal," Obama told his followers. Two years later, he privately snapped, "What does he think I'm supposed to do? Put on my f------ Aquaman gear and swim down there myself with a wrench?"

Thirteen years have passed and if the planet has begun to heal, Democrats won’t admit it.

The moment of epochal change can never be allowed to arrive because it would interrupt the permanent crisis. Salvation is always here and also always out of reach. But there’s always a new generation available to be fooled again because they know the past doesn’t matter.

A revisionist history work like the 1619 Project doesn’t just impose a radical new racist history, it displaces the past. Another revisionist history will come along to displace the 1619 Project because manufacturing history churn is vital to destroying any continuity with the past. All the academic lenses being swapped one for the other like a mad ophthalmologist leaves a new generation with a lot of theories, but no clue that they’re being indoctrinated into a lost cause.

The Left has no new ideas. Like Hollywood, it makes old ideas seem new by rebooting them, by making them appear hip and trendy, and by destroying a meaningful connection with the past. And that way audiences don’t realize they’re just seeing the same movie remade over again. What might be creative bankruptcy in a movie theater is a more seriously sisyphean problem described by Churchill as, “Those who fail to learn from history are condemned to repeat it.”

But how does a new generation learn from a past that isn’t allowed to exist on its own terms?

Demonizing the past is a convenient way of obscuring it. The only thing students are taught about the past is that it was a horrible time, its people backward, its customs savage, its learning wicked, its institutions racist, and its ideas horrifying. In postmodern history, the past exists only as a cautionary tale gleaned for historical struggles that fit into the new narrative.

History is an incomplete present whose revolutions were never fully fulfilled. It’s a revolutionary story of a world ruled by villains until they were overthrown by the forces of good. And this revolution against history must continue until all of the past is negated by the present.

The destruction of statues and burning of books forces ‘presentism’ for the past to conform to the dogmas of the moment. The biggest problem with the past isn’t that it’s politically incorrect, but that it’s repeating itself. The Black Lives Matter movement transparently harkens back to the 70s. So do most of the radical social impulses in which the Left cloaks its real power agenda.

The revolutionary chaos is doomed to fail again, but each oscillation breaks the country more.

The social activism is window dressing. A proper Marxist regime has little use for militant minorities, feminism, gay rights, police defunding, transgender bathrooms, pipeline protests, abortion, or any of the other issues the radicals have been using to waste our time. If you doubt that, go look at how many of any of the above you can find in China, Cuba, or North Korea.

The Russian Futurists vowed to throw the art and literature of the past overboard from the “steamship of modernity”. But the Bolsheviks were not looking for disruptive art and when the revolution arrived, modern art was tossed overboard and the former revolutionaries settled down to producing socialist realism and recreating the art of the past for the Soviet Union.

After a brief permissive period, the Soviet Union criminalized homosexuality and insisted on traditional marriages and roles for women. Those feminists who resisted were soon shown their place with one of the more notorious free love figures being forcibly married off by Lenin.

The dictatorship had eclipsed the revolution and the past was quickly rewritten all over again.

As Obama approaches his sixtieth birthday, the age at which Khrushchev struggled for control of the USSR and Mao launched his Great Leap Forward, two events that would require a good deal of historical editing, our American past is already being rewritten. Only those who are at least in their thirties will remember that there wasn’t a racial crisis before Barack Obama.

And there hadn’t been such a crisis for a generation before he took power.

Our racial crisis is not a legacy of 1619, but of 2008. Obama’s victory was not a revolution against a crisis, but the revolution that created the crisis. To a new generation, the racial crisis is a permanent feature of life. They have always lived under the crisis and expect to always live under it. That is why critical race theory and white privilege rants have become so pervasive.

Without a generation coming of age in a world shaped by the toxic idea that all white people are evil and all minorities are victims, no one outside academic circles would have willingly accepted them. And if that generation seems all too easy to radicalize into supporting the most insane policies, that’s because it grew up in a world defined by the hysteria of manufactured crises.

The world as they know it is doomed by melting ice caps, the rich getting richer, and the genocide of black people at the hands of the police. Every radical program is backed by a sense of urgent crisis which is killing people and destroying the future. They can’t imagine a present without the crisis and don’t remember ever living in a world not defined by crisis.

As Obama gets closer to his AARP cover, a generation lives in the world that he made.

Like Obama, his radical political movement speaks endlessly about the past, but has no actual past. Its past is always being reinvented and retold through new narratives, but with no facts.

The Obama revolution has come and gone. We have skipped past it to the Soviet Union of Chernenko and Andropov, of gerontocrats building the tyranny with the beams of revolution. The decline is everywhere as the theories fail, the factories close, and the stores stand empty.

The youth are being rallied to cheer for the revolutionary tyranny of Joe Biden, Nancy Pelosi, and Chuck Schumer who are promising a new era in history no one believes in anymore. Since the election their cause is no longer free college, it’s federalizing elections through H.R.1.

Federalizing elections, eliminating the filibuster, and packing the Supreme Court are compelling issues in Washington D.C., but the regime plotting new coups has little to say to the ordinary people facing high prices for gas and bread. Land, Bread, and Peace has given way to a race for total power over the country as the revolution of Hope, Crisis and Change comes of age.

There’s no change without crisis, and without hope, there’s only hate.

Daniel Greenfield is a Shillman Journalism Fellow at the David Horowitz Freedom Center. This article previously appeared at the Center's Front Page Magazine. Click here to subscribe to my articles.  Thank you for reading.

Posted by Rich Kozlovich at 8:46 AM