Kamala Went to Guatemala for Regime Change, Not Illegal Migration

In March, Joe Biden announced that Kamala Harris was going "to lead our efforts with Mexico and the Northern Triangle" to stem illegal "migration to our southern border".

According to Biden, "she’s the most qualified person to do it." 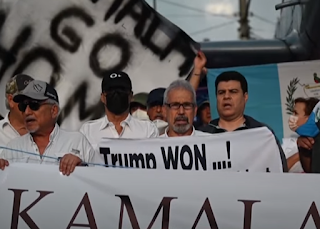 This confused everyone including the White House, Kamala Harris, and even the media which spent the next few months clarifying exactly what her job was and how she was going to do it.

At their joint press conference, Kamala Harris dubiously claimed that "we can chew gum and walk at the same time". While Texas officials demanded that she visit the border, Kamala instead vowed to focus on diplomacy with the countries the migrants were coming from.

Unlike President Trump, Biden was not going to secure the border. The border would be wide open and illegal aliens would be dispersed across the country. An agreement to keep the migrants in Mexico, Trump’s biggest immigration win, was shredded. The only plan to deal with the huge border surge was addressing the “root causes” of migration. But the only real root cause is that America is richer than Mexico and other countries south of the border.

While the Biden administration got to work making America as poor as possible, Kamala was dispatched to impose Marxist regime change on Latin America in the name of the illegal aliens.

The trip didn’t go well from the start.

Air Force Two took off and then had to come back due to a landing gear problem.

Just like in the primaries, Kamala has always had trouble sticking the landing.

"We all said a little prayer, but we’re good,” Kamala told reporters.

Kamala claims to be a black Baptist, is married to a secular Jewish man, grew up attending Hindu temples, and asked an aunt before an election, "Please pray for me, break coconuts at the temple." It’s hard to imagine what she was praying to. Probably the only one thing she believed in that has come through for her: Willie Brown.

The media told us that Kamala Harris was a member of Amos Brown's leftist Third Baptist Church. That's fine, except that the church is in San Francisco, and Kamala has lived in a Brentwood mansion, and the church is in decline due to the lack of black people in the area.

But if you can believe that Kamala is “the most qualified person” to engage in diplomacy with countries she can’t find on a map and solve their social problems, believing that she’s a devout parishioner of a church 350 miles away should be a breeze for any devout Democrat.

On the second Air Force Two, Kamala finally landed in Guatemala to jeers from an angry mob.

"We are not on the same side of the coin. It is obvious," Guatemala's President Giammattei had earlier told CBS.

He urged the Biden administration "to send more of a clear message to prevent more people from leaving."

President Giammattei is a staunch law and order conservative, and if he appeared to be undermining Kamala, it was because she had spent months undermining him.

In May, Kamala met with a number of leftist opponents of Giammattei, including former Attorney General Thelma Aldana, who had targeted conservative politicians with corruption charges, before herself being charged with corruption. Instead of returning home to face those charges, she received political asylum in the United States. Her social media is full of praise for Kamala Harris’ trip to Guatemala, and her promises to end "corruption" in Guatemala.

Behind the mutual charges of corruption is a struggle between the Left and Right, with socialists and narcoterrorists on one side and military officers and free marketers on the other.

Kamala and the Biden administration are choosing to stand with the Left.

That’s not exactly surprising. Neither were the angry protesters that greeted Kamala at the airport waving banners and signs reading "Kamala, Mind Your Own Business", "Kamala, Go Home", "Kamala Trump Won", and “Kamala Stop Funding Criminals".

Those signs might have been confusing to Americans who get their news from the media bubble which left them completely unprepared to understand what was really going on.

Guatemalans saw her as prepping a leftist coup by backing leftist organizations and activists.

And they were fighting back.

Kamala Harris blamed the migrant crisis on "corruption, violence and poverty, the lack of economic opportunity, the lack of climate adaptation and climate resilience, the lack of good governance." Two of those are very obvious code words for regime change.

A few days ago it was announced that Kamala’s trip would be about “anti-corruption” efforts.

Aside from some leftist prosecutors, Guatemalans are not coming here over government corruption. But did anyone really think that Biden wanted to reduce illegal migration?

The Left is adept at killing two birds with one stone.

In this case, it’s using a border crisis to impose leftist regimes on Latin America.

Behind the anti-corruption push is a movie to restart the UN’s International Commission Against Impunity in Guatemala (CICIG) backed by Soros activists. Most Guatemalans would prefer to be ruled by their own elected officials, not by the United Nations, Soros, or Kamala Harris.

Kamala Harris quickly announced that the DOJ will create an anti-corruption task force that will provide "case-based mentoring to the Guatemalan Public Ministry, including the Special Prosecutor Against Impunity (FECI)" and "a rapid response capability to deploy U.S. prosecutors and law enforcement experts to provide mentorship to develop corruption cases."

That’s why Biden described Kamala as “the most qualified person to do it." Unlike much of the administration, she has a background as a prosecutor. And that’s her real job in Guatemala.

“One essential ingredient of our priorities must be to fight corruption,” Kamala Harris declared, while standing next to President Giammattei . “That has been one of our highest priorities.”

Everyone who’s seen the leaked Hunter Biden material knows how committed Willie Brown’s girlfriend is to fighting corruption. It’s been a while since there was a dirtier administration.

But fighting corruption in Latin America doesn’t have anything to do with corruption. In a thoroughly corrupt system where everyone steals and takes bribes, it means regime change.

Kamala isn’t in Guatemala to stem the flow of illegal aliens, but to impose a leftist regime. And that regime will create the crisis conditions that will lead even more migrants to come here.

It’s a win-win scenario for the Left. And a lose-lose crisis for America.

Republicans need to understand what the Guatemalan protesters jeering Kamala’s visit were telling us. The Biden administration isn’t fighting to stop illegal migration: it’s plotting to make it worse while turning over much of Latin America to Marxist narco-terrorists and Iranian allies.

If Biden and Kamala succeed, then a dozen Venezuelans will rise south of the border. And millions of illegal aliens will cross an unprotected border to overrun the United States.

Posted by Rich Kozlovich at 6:59 AM