Genetic engineering rescues a tree from a threatening fungus. 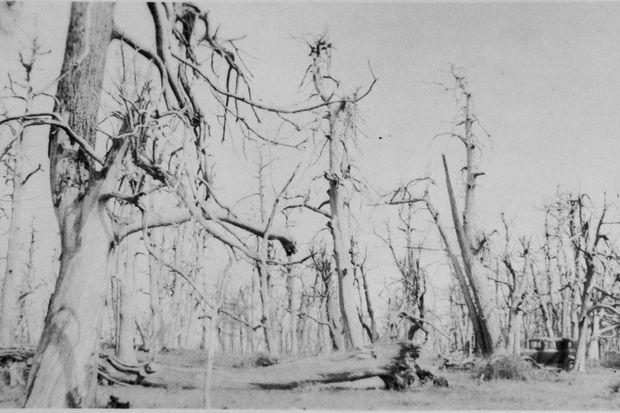 A forest of chestnut trees ravaged by blight in Luray, Va. Photo: Library of Congress
A blight-tolerant American chestnut tree is the latest example of what the science community has begun to call a GRO—a genetically rescued organism. In the past century approximately four billion chestnut trees have been lost in the U.S. due to blight that spread when the Cryphonectria parasitica fungus arrived with chestnut trees imported from Asia. A once-dominant hardwood species is now rare.

Nature can be fickle, but using science to engineer solutions allows precise methods to combat natural pathogens. Some species are resistant to the fungus, and that’s why it makes sense to use transgenic tools to help the chestnut tree utilize beneficial genes from other plants—essentially vaccinating against the fungus.

It’s all part of a 28-year effort by the nonprofit American Chestnut Research and Restoration Project, led by the State University of New York’s College of Environmental Science and Forestry. Scientists use a gene from bread wheat that produces an enzyme called oxalate oxidase, which prevents the fungus from forming cankers on plant stems. The enzyme is found in all grain crops, plus bananas, strawberries and more..........To Read More.....