‘Two years ago, I wrote about how Connecticut morphed from a low-tax state to a high-tax state.

The Nutmeg State used to be an economic success story, presumably in large part because there was no state income tax.

But then an income tax was imposed almost 30 years ago and it’s been downhill ever since.
The last two governors have been especially bad news for the state.

As explained in the Wall Street Journal, Governor Malloy did as much damage as possible before leaving office.

The 50 American states have long competed for people and business, and the 2017 tax reform raises the stakes by limiting the state and local tax deduction on federal returns. The results of bad policy will be harder to disguise. A case in point is Connecticut’s continuing economic decline, and now we have even more statistical evidence as a warning to other states. The federal Bureau of Economic Analysis recently rolled out its annual report on personal income growth in the 50 states, and for 2017 the Nutmeg State came in a miserable 44th. …the state’s personal income grew at the slowest pace among all New England states, and not by a little. …The consistently poor performance, especially relative to its regional neighbors, suggests that the causes are bad economic policies… In Mr. Malloy’s case this has included tax increases starting in 2011 and continuing year after year on individuals and corporations… It is a particular tragedy for the state’s poorest citizens who may not be able to flee to other states that aren’t run by and for government employees.

Here’s some of the data accompanying the editorial.

Eric Boehm nicely summarized the main lesson from the Malloy years in a column for Reason.

If it were true that a state could tax its way to prosperity, Connecticut should be on a non-stop winning streak. Instead, state lawmakers are battling a $3.5 billion deficit. Companies including General Electric, Aetna, and Alexion, a major pharmaceutical firm, have left the state in search of a lower tax burden. Connecticut is looking increasingly like the Illinois of New England: A place where tax increases are no longer fiscally or politically realistic, even though budgetary obligations continue to grow and spending is completely out of control.

Connecticut desperately needs a new economic direction. Unfortunately, the biennial budget soon to be signed by new Gov. Ned Lamont doubles down on policies that have produced abysmal results.The state’s economic indicators are grim. Connecticut routinely ranks near the bottom in surveys of economic competitiveness. Residents and businesses have been voting with their feet. According to the National Movers Study, only Illinois and New Jersey suffered more out-migration in 2018. General Electric left for Boston in 2016. This week, Farmington-based United Technologies Corp. announced it too will move its headquarters… Mr. Lamont’s budget seems designed to accelerate the decline. It increases spending by $2 billion while extending the state’s 6.35% sales tax to everything from digital movies to laundry drop-off services to “safety apparel.” It adds $50 million in taxes on small businesses, raises the minimum wage by 50%, and provides the country’s most generous mandated paid family medical leave. Florida and North Carolina must be licking their lips. …The state employee pension plan is underfunded by $100 billion—$75,000 per Connecticut household. A responsible budget would try to start filling the gap; the Lamont budget underfunds the teachers’ plan by another $9.1 billion, increasing the long-term liability by $27 billion. …Mr. Lamont proposes to slap a 2.25% penalty on people who sell a high-end home and move out of state. Having given up on attracting affluent families, he’s trying to prevent the ones who are here from leaving.

As one might expect, all this bad news is generating bad outcomes. Here are some details from an editorial in today’s Wall Street Journal.

…as a new study documents, more businesses are leaving Connecticut as they get walloped with higher taxes that are bleeding the state. Democrats in 2015 imposed a 20% surtax on top of the state’s 7.5% corporate rate, effectively raising the tax rate to 9%. They also increased the top income tax rate to 6.99% from 6.7% on individuals earning more than $500,000. The state estimated the corporate tax hike would raise $481 million over two years, but revenue increased by merely $323 million… Meantime, the state’s Department of Economic and Community Development, whose job is to strengthen “Connecticut’s competitive position,” in 2016 alone spent $358 million…to induce businesses to stay or move to the state. This means that Connecticut doled out twice as much in corporate welfare as it raked in from the corporate tax increase. …Thus we have Connecticut’s business model: Raise costs for everyone and then leverage taxpayers to provide discounts for a politically favored few. …The state has lost population for the last five years. …The exodus has depressed tax revenue.

And there’s no question that people are voting with their feet, as Bloomberg reports.

Roughly 5 million Americans move from one state to another annually and some states are clearly making out better than others. Florida and South Carolina enjoyed the top economic gains, while Connecticut, New York and New Jersey faced some of the biggest financial drains, according to…data from the Internal Revenue Service and the U.S. Census Bureau. Connecticut lost the equivalent of 1.6% of its annual adjusted gross income, as the people who moved out of the Constitution State had an average income of $122,000, which was 26% higher than those migrating in. Moreover, “leavers” outnumbered “stayers” by a five-to-four margin.

Here’s a chart from the article showing how Connecticut is driving away some of its most lucrative taxpayers. 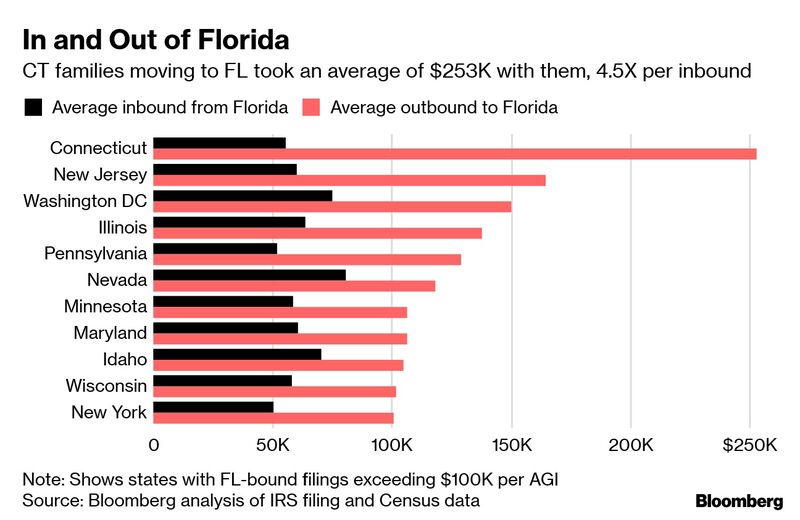 Here’s a specific example of someone voting with their feet. But not just anybody. It’s David Walker, the former Comptroller General of the United States, and he knows how to assess a jurisdiction’s financial outlook.

…my wife, Mary, and I are leaving the Constitution State. We are saddened to do so because we love our home, our neighborhood, our neighbors, and the state. However, like an increasing number of people, the time has come to cut our losses… current state and local leaders have the willingness and ability to make the tough choices needed to create a better future in Connecticut, especially in connection with unfunded retirement obligations. …Connecticut has gone from a top five to bottom five state in competitive posture and financial condition since the late 1980s. In more recent years, this has resulted in an exodus from the state and a significant decline in home values.

All of this horrible news suggests that perhaps Connecticut should get more votes in my poll on which state will be the first to suffer fiscal collapse.

The former Governor of Indiana, Mitch Daniels, wrote last year for the Washington Post that we should be worried about pressure for a bailout of profligate states such as Connecticut.

…several of today’s 50 states have descended into unmanageable public indebtedness. …in terms of per capita state debt, Connecticut ranks among the worst in the nation, with unfunded liabilities amounting to $22,700 per citizen. …More and more desperate tax increases haven’t cured the problem; it’s possible that they are making it worse. When a state pursues boneheaded policies long enough, people and businesses get up and leave, taking tax dollars with them. …So where is a destitute governor to turn? Sooner or later, we can anticipate pleas for nationalization of these impossible obligations. …Sometime in the next few years, we are likely to go through our own version of the recent euro-zone drama with, let’s say, Connecticut in the role of Greece.

And don’t forget other states that are heading in the wrong direction. Politicians from California, New York, New Jersey, and Illinois also will be lining up for bailouts.

Here’s the bottom line on Connecticut:

As recently as 1990, the state had no income tax, which put it in the most competitive category.
But then politicians finally achieved their dream and imposed an income tax.

And in a remarkably short period of time, the state has dug a big fiscal hole of excessive taxes and spending (with gigantic unfunded liabilities as well).

It’s now in the next-to-last category and it’s probably just a matter of time before it’s in the 5th column.

P.S. While my former state obviously has veered sharply in the wrong direction on fiscal policy, I must say that I’m proud that residents have engaged in civil disobedience against the state’s anti-gun policies.
Posted by Rich Kozlovich at 5:44 AM