It was a cold December day in Washington D.C. and Neal Katyal, Obama’s Solicitor General, was arguing with Justice Clarence Thomas, the great-grandson of a freed slave, about slavery.

Katyal was representing Nestle, the American subsidiary of a Swiss multinational, being sued by freed African child slaves for profiting from slavery, and Justice Thomas wasn’t having it. The two men, the consummate Democrat legal operative, who had been there for Bush v. Gore and defended ObamaCare before the Supreme Court, and the court’s only black justice descended from slaves, debated corporate liability for child slavery for a social justice company. 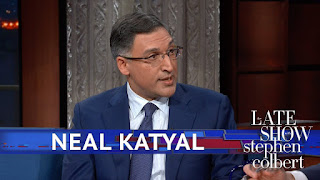 Nestle USA had responded to the Black Lives Matter race riots with "mandatory unconscious bias training" for its employees before going on to defend the company’s cocoa business from a lawsuit by freed child slaves who had been forced to work on plantations between the ages of 12 and 14, and were brutally beaten when they tried to escape.

The leadership of Nestle's UK branch had urged, "I want people talking about race, about inequality and about why it should ever be called into question that black lives matter."

Nestle’s version of black lives mattering allegedly meant African child slaves working fourteen hours a day on cocoa plantations, given "scraps of food to eat", "beaten with whips and tree branches", "forced to sleep on the floor", and to "drink urine" if they tried to run away.

Coca Cola, which met the BLM riots by pouring money into black nationalist groups and rolling out a, “Together We Must” slogan, joined in the defense of Nestle by filing its own brief. Coke was also recently caught lobbying against a bill that would crack down on slave labor in China.

Black Lives Matter means Obama’s former lawyer lecturing a descendant of freed slaves about immunity for African child slavery and a corporation forcing its employees into humiliating critical race theory struggle sessions while benefiting from slavery, not in 1619, but now.

Katyal’s defense of Nestle depended, among other things, on Nazi gas chambers.

Nestle’s Supreme Court brief argues that, “even the firm that supplied Zyklon B gas, which the Nazis used to kill millions, was not indicted.” That's fortunate for Nestle which didn't make Zyklon B, but did pay out $14.6 million over the use of Jewish slave labor during the Holocaust.

"As the legal successor of such corporations, Nestle nevertheless accepts its moral responsibility to help alleviate human suffering," Nestle declared in a statement.

That’s big of Nestle, which had helped finance the Swiss Nazi Party and became an exclusive supplier of chocolate to the Wermacht. Helmut Maucher, Nestle's longtime CEO and honorary chairman, had served in the Wehrmacht. But that’s all water under the national socialist bridge.

But Obama’s lawyer, who’s being touted for a position with Biden, is an even better story.

The Supreme Court brief on behalf of the former slaves notes that a study “conducted by Tulane University and funded by the U.S. Department of Labor found that the total number of children engaging in cocoa production, child labor, and hazardous work in cocoa growing areas in West Africa increased more than thirty-eight percent from 2008–2009 to 2013–2014.”

Why would child slavery have dramatically increased under Obama? The slaves in the Nestle case were trafficked from Mali to Côte d’Ivoire, the country at the center of the cocoa business and child slavery, which underwent a Muslim-Christian civil war in Obama’s first years in office.

When Muslim rebels, many of them illegal migrants, rigged the 2010 election, Obama backed the Muslim north over the Christian south. The French and the UN intervened militarily to subjugate the indigenous Christians to Muslim rule. Since then, Alassane Ouattara, a descendant of Muslim rulers, dubiously won the latest presidential election by 83%.

And Côte d’Ivoire is slowly being Islamized and is turning into a slave nation.

Côte d’Ivoire’s indigenous population was concentrated in the richer forests of the south, allowing the migration of Islamic tribes to occupy the drier north. Cocoa is the black gold of the Ivory Coast with most of the economy being geared around exporting the lucrative crop.

Allowing the Muslim forces to take over Côte d’Ivoire was just a brief interlude for Obama before launching the Arab Spring, and invading and removing Libya’s ruler. The resulting war allowed the Muslim Brotherhood, Al Qaeda and later ISIS to gain a foothold in Libya. Tuareg Islamists, who still held a grudge over losing their slaves, invaded Mali and brutally imposed Islamic law.

The Tuaregs were among the few to still maintain a very public trade in slaves. A State Department report from last year found that black slavery was still rife among the Tuaregs and that, “Malian children endure forced labor on cotton and cocoa farms in Cote d’Ivoire”. The freed slaves at the center of the Supreme Court lawsuit had originally been trafficked from Mali.

Cote d’Ivoire’s boom in cocoa production was built around slave labor under brutal conditions. The beneficiaries of that slave labor are the multinationals who preach social justice, as long as it doesn’t raise the price of cocoa. It’s one thing to chant Black Lives Matter and support the racist hate group burning and looting stores, and another to actually stop profiting from black children being sold into slavery for $60 and then watching them being tortured and beaten.

According to the allegations in the lawsuit, Nestle dispensed “personal spending money to maintain farmers’ loyalty as exclusive suppliers” to the men running the slave plantations.

But this nightmare was put into place by the former boss of the lawyer shilling for Nestle.

The fallout from the Arab Spring had devastated Africa. The Middle East was better able to correct some of the damage from Obama’s empowerment of Islamists. Africa, poorer and more wounded, suffered far more. Obama’s backing for Islamist takeovers in Cote d’Ivoire, Libya, and Nigeria was little short of genocide, and, among its other effects, led to a boom in slavery.

Obama had done more than any other politicians to mainstream both black nationalism and black slavery. That’s only a paradox for those who don't remember Malcolm X admiring Muhammad Ahmad, the Mahdi who brought back slavery, before heading to Sudan to embrace its Islamists, or Stokely Carmichael shilling for brutal Muslim dictator Ahmed Toure.

America’s black nationalists don’t admire democracy or freedom. They reserve their veneration for strongmen and thugs. And the regimes they admire oppress and kill other black people.

Black nationalism has a way of ending in Islamist rule and the enslavement of black people.

While Black Lives Matter leaders get cash from woke corporations, those same corporations profit from slavery in Asia, where lives don’t matter, but also in Africa, where they supposedly do. While the Times serve up the 1619 Project, and the statues of anyone who ever had anything to do with a slave centuries ago are toppled, real African slavery continues today.

And it goes on much the same way it always had. It just no longer takes place in America.

America was never built on slavery, but woke corporations, from Nike to Apple, from Coca Cola to Nestle, who force their employees to chant, “Black Lives Matter”, are built on slavery.

Their commitments to social justice, to equity and BLM, are a distraction from the real slavery.
Daniel Greenfield, a Shillman Journalism Fellow at the Freedom Center, is an investigative journalist and writer focusing on the radical Left and Islamic terrorism.

Posted by Rich Kozlovich at 6:34 AM