This appeared here and my thanks to Alan for allowing me to publish his work. RK 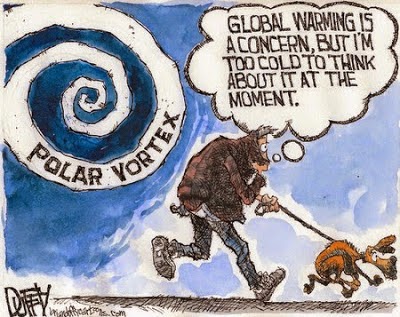 On January 16 The New York Times reported the lies NASA keeps telling about global warming with an article titled “2014 Breaks Heat Record, Challenging Global Warming Skeptics.” We have reached the point where neither a famed government agency nor a famed daily newspaper can be believed simply because both are lying to advance the greatest hoax of the modern era.


Remember that 2014 started off with something called a “polar vortex” to describe the incredibly cold weather being experienced and remember, too, that we were being told that it was evidence of global warming! That’s how stupid the “Warmists” who keep saying such things think we are.


The Earth is in the 19th year of a natural cooling cycle based on the reduced radiation of the Sun which is in its own natural cycle. It hasn’t been getting warmer and most people who give it any thought at all know the truth of that.


That’s progress. No youngster under the age of 19 has ever experienced a single day of global warming. No computer model that ever predicted it has been accurate. Neither the Pope nor the President, nor any other world leader who repeats the global warming claim is correct.


The latest claim came from NASA and, as I continue to remind readers, it is a government agency whose budget depends on parroting the lies the President keeps telling about global warming.


Astrophysicist, Dr. David Whitehouse, said “The NASA press release is highly misleading…talk of a record is scientifically and statistically meaningless.” He was joined by climatologist Dr. Roy Spencer who said “We are arguing over the significance of hundredths of a degree.”


Do you believe that a hundredth of a degree makes a difference? Well, it does if you are a government agency desperately trying to keep the global warming hoax alive. Climatologist Dr. Pat Michaels asked “Is 58.46 degrees distinguishable from 58.45 degrees? In a word, NO.”


Marc Morano, the editor of CFACT’s ClimateDepot.com, said, “There are dueling global datasets—surface temperature records and satellite records—and they disagree. The satellites show an 18 year-plus global warming standstill and the satellite was set up to be ‘more accurate’ than the surface records.” As for the NASA claim, Morano dismissed it as “simply a political statement not based on temperature gauges.” Morano, a former member of the staff of the U.S. Senate Environmental & Public Works Committee, is working on an upcoming documentary “Climate Hustle.”


How does this affect you? The lie that carbon dioxide and methane emissions, dubbed “greenhouse gases”, are causing global warming is the basis for the Obama administration’s attack on the nation’s energy sector and, in particular, the provision of electricity by coal-fired plants. In the past six years many of these plants have been shut down or will be. The result is less electricity and higher prices for electricity. The other result is an attack on the oil and natural gas industry that drill to access these resources. There is not a scintilla of truth to justify what is being done to Americans in the name of global warming


There is yet another result and that is the loss of jobs in the energy sector and the reduction in revenue to the nation and states it represents. The nation’s economy overall has been in sluggish state which the word “growth” doesn’t even begin to describe. That hurts everyone.

Most of us don’t have a lot of time to get up to speed and stay there regarding the facts surrounding global warming or climate change. An excellent source of information is the Environment & Climate News, a monthly publication by The Heartland Institute, a thirty year old non-profit free market think tank that will sponsor its tenth annual International Conference on Climate Change in Washington, D.C. in June.


NASA has been allowed to degrade to the point where the agency that sent men to the Moon no longer has the capacity to even transport them to Mir, the space station built by the Russians. We have gone from the world’s leader in space exploration to an agency that has been turned into a propaganda machine asserting that a hundredth of a degree “proves” that global warming is happening.


The U.S. and the rest of the world are setting records, but they are records for how cold it has become everywhere. There was snow recently in Saudi Arabia from a storm that swept across Iraq, Syria, Lebanon, Israel, and Jordan. Does that sound like global warming to you? For an excellent source of information on the cooling of the planet, visit Ice Age Now.


You have an obligation to yourself, your family, friends and co-workers to not just know the truth but to denounce entities like NASA, the EPA, and The New York Times, Time, Newsweek, National Geographic, and others that keep repeating the lies about global warming.