This originally appeared here and I wish to thank Alan for allowing me to publish his work. RK
Fifty million Americans who live in the northeast will experience what is predicted to be a historic blizzard from Monday evening through Tuesday. Cities and towns will virtually or literally close down. People will be told to stay indoors for their safety and to facilitate the crews that will labor to clear the roads of snow.

In other words, welcome to Alaska, a place that is plenty cold most of the year and which is no stranger to snow and ice.

Alaska, however, has something that the whole world considers very valuable; oil and natural gas. Lots of it. In 1980 a U.S. Geological Survey estimated that the Coastal Plain could contain up to 17 billion barrels of oil and 34 trillion cubic feet of natural gas.

A nation with an $18 trillion debt might be expected to want to take advantage of this source of revenue, but no, not if that debt was driven up by the idiotic policies of President Barack Obama and not if it could be reduced by the same energy industry that has tapped similar oil and natural gas reserves in the lower 48 states by drilling on private, not public lands.

Instead, on Sunday President Obama referred to the Arctic National Wildlife Refuge (ANWR) as “an incredible place—pristine, undisturbed. It supports caribou and polar bears” and other species and, guess what, tapping its vast oil and natural gas reserves would not interfere in any way with those species despite the whopping lie that “it’s very fragile.”

At Obama’s direction, the Interior Department announced it was proposing to preserve as wilderness nearly 13 million acres of land in ANWR’s 19.8 million-acre area. That would include 1.5 million acres of coastal plains that Wall Street Journal reported to be “believed to have rich oil and natural gas reserves.”

Not a whole lot of people choose ANWR as a place to vacation. It is a harsh, though often beautiful, area that only the most experienced visitor might want to spend some time. I would want to make every environmentalist who thinks any drilling would harm the area have to take up residence in its “pristine” wilderness to confirm that idiotic notion.

They would find plenty of caribou, polar bears and other species hanging out amidst the oil and gas rigs, and along the pipe line. The Central Arctic Caribou Herd that migrates through the Prudhoe Bay oil field, just next to ANWR has increased from 5,000 animals in the 1970s to more than 50,000 today. There is no evidence than any of the animal species have experienced any decline. 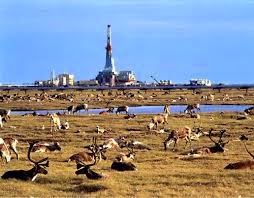 The Coastal Plain lies between known major discovery areas and the Prudhoe Bay, Lisburne, Endicott, Milne Point and Kuparuk oil fields are currently in production In 1996, the North Slope oil fields produced about 1.5 million barrels of oil per day or approximately 25% of the U.S. domestic production. Alaska is permitted to export its oil because of its high levels of productivity.

So why has Obama’s Department of the Interior decided it wants to shut off energy exploration and extraction in a whopping 13-million acres of what is already designated as a wildlife refuge and along its coastlines on the Beaufort and Chukchi seas? The answer is consistent with Obama’s six years of policies to deny Americans the benefits of the nation's vast energy reserves, whether it is the coal that has previously provided 50% of our electrical energy—now down by 10%--or access to reserves of oil and natural gas that would make our nation energy independent as well as a major exporter.

The good news is that only Congress has the authority to declare an area as wilderness. It has debated the issue for more than 30 years and in 12 votes in the House and 3 votes in the Senate it has passed legislation supporting development and opposing the wilderness designation.
And guess who is the new chairman of the Senate Energy and Natural Resources Committee? Sen. Lisa Murkowski, an Alaskan Republican. She also heads up the appropriations subcommittee responsible for funding the Interior Department!
This latest Obama ANWR gambit is going to go nowhere. It does, however, offer the Republican Congress an opportunity to demonstrate its pro-energy credentials.

“I cannot understand why this administration is willing to negotiate with Iran, but not Alaska,” said Sen. Murkowski when informed of Obama’s latest attack.
© Alan Caruba, 2015
Posted by Rich Kozlovich at 5:17 AM