Cuba’s Socialism Has Been a Total Failure

I like cross-country comparisons – such as North Korea vs South Korea and East Germany vs. West Germany – because they can be very informative when comparing the results of socialism vs. markets.

One of the most dramatic examples is Cuba vs. Hong Kong.  More than 60 years ago, back when Castro took power, the two jurisdictions had similar living standards.  But as Cuba tried socialism and Hong Kong chose free enterprise, there was a stunning divergence. Cuba is a basket case and Hong Kong is rich.*

In a column for Human Progress, Neil Monnery compares the two jurisdictions.

As the world entered the turbulent 1960s, two men, half a world apart, one a doctor and the other a classicist, both foreigners far from home, were charged with bringing human progress to their adopted countries. …One, Che Guevara, the well-known Argentinean revolutionary, was the architect of Cuba’s communist economic system. The other, Sir John Cowperthwaite, was born in Britain and is largely unknown today. He was central to Hong Kong’s post-war recovery and to its unique laissez-faire, free-market economic policy. …Hong Kong and Cuba had similar GDP per capita in 1960. Since then, Hong Kong’s has grown 14-fold, Cuba’s just twice, leaving Hong Kong seven times more prosperous than Cuba. In 1960, Hong Kong’s GDP per capita was a third of its old mother country, Britain. Now, it is 40 percent higher, matching the United States and Switzerland. …Cuba and Hong Kong demonstrate the compound effect over six decades of state planning versus market forces.

Some folks on the left, when presented with this data, will admit that Cuba has fallen behind in terms of economic development.

But cranks like Bernie Sanders claim that’s okay because Castro and his cronies instead focused on human development.

But that’s a very weak argument. In an article for the Foundation for Economic Education, Hans Bader analyzes Cuba’s track record on education and health.

Castro did not give Cubans literacy. Cuba already had one of the highest literacy rates in Latin America by 1950, nearly a decade before Castro took power, according to United Nations data… Cuba has made less educational progress than most Latin American countries over the last 60 years. …Cuba led virtually all countries in Latin America in life expectancy in 1959, before Castro’s communists seized power. But by 2012, right after Castro stepped down as Communist Party leader, Chileans and Costa Ricans lived slightly longer than Cubans. Back in 1960, Chileans had a life span seven years shorter than Cubans, and Costa Ricans lived more than two years less than Cubans on average. …Today, life spans are virtually the same in Cuba as more prosperous Chile and Costa Rica—if you accept the rosy official statistics put out by Cuba’s communist government, which many people do not.

There are good reasons to doubt official numbers from Cuba. People who visit the island have sad stories to tell.  For instance, in a column last year for the Wall Street Journal, Andy Laperriere explains what he saw on his church-sponsored trips to Cuba.

It’s astonishing some people still cling to a romanticized version of Cuban life under communism. It bears no resemblance to reality. …people who don’t have children’s Tylenol and cheap reading glasses probably aren’t getting world-class medical care. Another striking feature of Cuba is the pervasive idleness. Everywhere you look, people are standing around. They aren’t working, because they get paid almost nothing. …Even the buildings a few blocks from the seat of government in Havana are crumbling. It’s obvious to a visitor that Cubans live in abject poverty. …there are three classes of people in Cuba. The governmental elite live in gated communities and enjoy what Americans would regard as middle-class living standards. The average person who relies on his own income lives in desperate Third World conditions. In between are people with generous relatives in the U.S. They have more disposable income, but their living conditions are comparable to those of the poorest Americans.

What a depressing analysis.  I wrote a few days ago that Cuba may have done a good job of eliminating inequality, but only because everyone was poor.  But that wasn’t right. Like in many socialist regimes, there’s a tiny sliver of the population that enjoys decent living standards.  Or, if you’re the dictator, you live like a king. Here are some excerpts from a 2014 report in the U.K.-based Guardian.

Fidel Castro lived like a king with his own private yacht, a luxury Caribbean island getaway complete with dolphins and a turtle farm, and travelled with two personal blood donors, a new book claims. In La Vie Cachée de Fidel Castro (Fidel Castro’s Hidden Life), former bodyguard Juan Reinaldo Sánchez, a member of Castro’s elite inner circle, says the Cuban leader ran the country as his personal fiefdom like a cross between a medieval overlord and Louis XV. …the vast majority of Cubans were unaware their leader enjoyed a lifestyle beyond the dreams of many Cubans and at odds with the sacrifices he demanded of them. …In 2006 Forbes magazine listed the Cuban leader in its top 10 richest “Kings, Queens and Dictators”, citing unnamed officials who claimed Castro had amassed a fortune.

Let’s close by addressing the argument that Cuba is only poor because of the U.S. trade embargo.

Professor Art Carden addressed that argument in a column for the American Institute for Economic Research.

I think the embargo…should be lifted immediately, as it has given Cuban communists a convenient scapegoat for their country’s problems. The embargo, however, is not what causes Cuba’s woes, and people blaming the embargo overlook the fact that Cuba trades pretty extensively with the rest of the world–how else do you think Canadian and Mexican merchants get the Cuban cigars they hawk to American tourists? It’s not because a Cuban Rhett Butler is smuggling them past a blockade. It’s because Cuba trades freely with the entire world.

You may be thinking that’s just one economist’s opinion. But it turns out that Art’s view is widely shared by other economists, as you can see from this tweet from Professor Jeremy Horpedahl.  Wow, these results are even stronger than the survey showing that economists disagreed with Thomas Piketty’s class-warfare hypothesis.

P.S. Let’s enjoy some Cuba-themed humor. First, our friends on the left sometimes claim free trade exploits developing nations. But, it that’s true, why do they claim Cuba is hurt be an absence of trade with the United States? 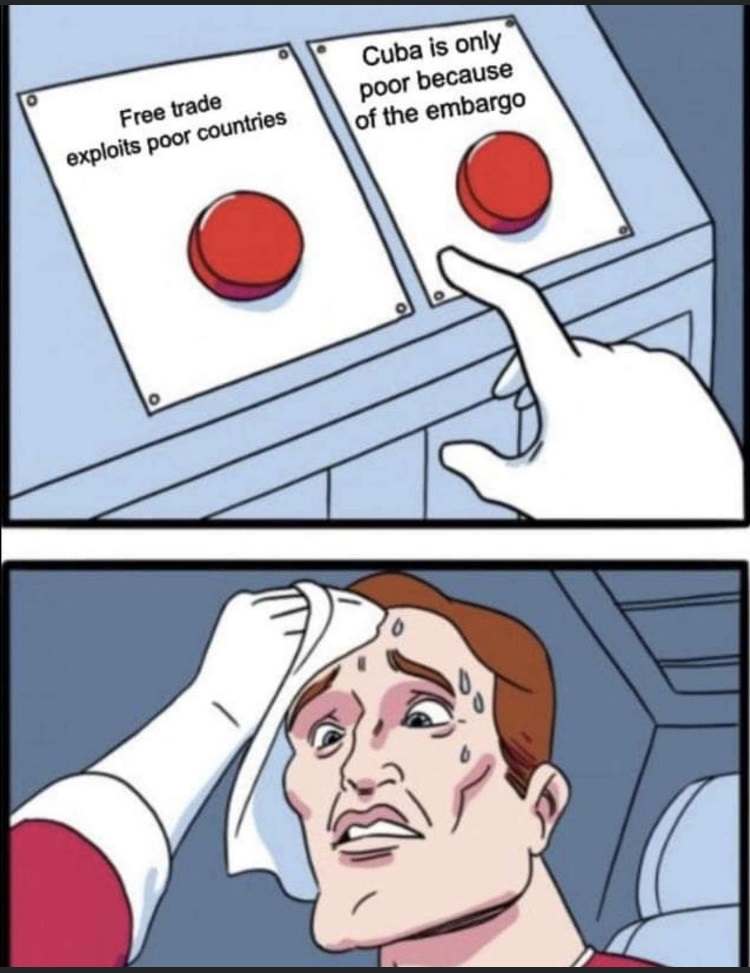 Next, here’s a t-shirt suggesting we swap freedom-seeking Cubans for statism-seeking Americans. 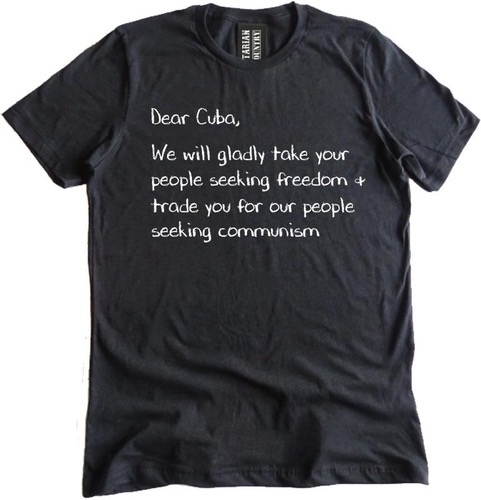 I’m in favor of that trade, though I suspect American leftists wouldn’t actually want to live in a socialist country.

P.P.S. I have great disdain for the “useful idiots” who concoct arguments to make Cuba’s repressive regime look good.

Posted by Rich Kozlovich at 5:20 AM