Yesterday, I shared some of the highlights (and lowlights) of the Democratic Party platform.

It wasn’t a fun task. The Democrats put together a rat’s nest of taxes, spending, cronyism, and red tape, so my blood pressure probably went crazy as I read the document. Crazy Bernie Sanders may have lost the war for the nomination, but it seems that he mostly won the battle over the platform.

The plank about letting states be in charge of marijuana policy was the only part of the platform that I actually liked (even though I personally disapprove of drug use).

Though it mostly doesn’t matter what’s in party platforms. As I pointed out yesterday, platforms tend to be ideological statements to please party activists. Politicians generally don’t care about their respective party platforms, and they definitely don’t allow their behavior to be constrained by platform language.

With that important caveat in mind, let’s now review the GOP platform. And I’ll use the same approach that I used when looking at the Democrat’s document. I’ll provide a short excerpt and then give my two cents.

Here are some of the main economic issues addressed (or bungled) by Republicans.


We believe the Constitution was written not as a flexible document, but as our enduring covenant.

That’s true, but why aren’t GOPers defunding most of the federal government if that’s what they really believe?


Because of the vital role of religious organizations, charities, and fraternal benevolent societies in fostering generosity and patriotism, they should not be subject to taxation and donations to them should remain deductible.

Endorsing the deduction for charitable contributions isn’t an optimistic sign for those of us who support fundamental tax reform.


To guard against hypertaxation of the American people in any restructuring of the federal tax system, any value added tax or national sales tax must be tied to the simultaneous repeal of the Sixteenth Amendment, which established the federal income tax.

This may be my favorite part of the GOP platform. Hopefully it will discourage Rand Paul and Ted Cruz from including a VAT if they run for president again and put forth tax reform plans.


We propose to level the international playing field by lowering the corporate tax rate to be on a par with, or below, the rates of other industrial nations.

Hard to argue with that plank, though it raises the question of why Republicans haven’t enacted this change already.


We endorse the recommendation of the National Commission on Fiscal Responsibility and Reform, as well as the current Administration’s Export Council, to switch to a territorial system of taxation so that profits earned and taxed abroad may be repatriated for job-creating investment here at home.

This is the right policy. Too bad many GOPers ignored this bit of wisdom and voted for TARP.


We propose to phase out the federal transit program.

They should phase out the entire Department of Transportation, but this would be a good start.


…we oppose a further increase in the federal gas tax.

That’s good, though repealing the tax would be even better.


Amtrak is an extremely expensive railroad for the American taxpayers, who must subsidize every ticket. The federal government should allow private ventures to provide passenger service in the northeast corridor. 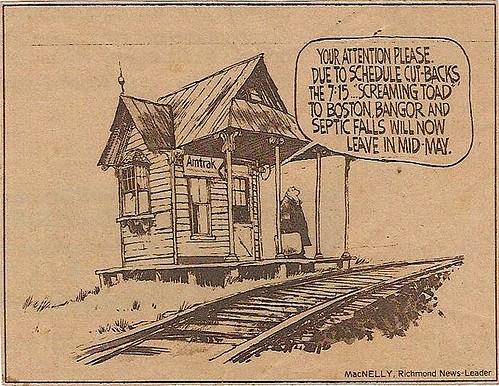 All this sounds good, but it’s a bit vacuous. There should be an explicit commitment to end Amtrak subsidies.


We reaffirm our intention to end federal support for boondoggles like California’s high-speed train to nowhere.

A welcome commitment, though it should be extended to all transportation projects.


We should reduce the occupational licensing laws that shut untold millions of potential workers out of entrepreneurial careers.

This is largely a problem caused by state and local governments, but it’s nonetheless nice to see a statement of support for much-needed change.


We must overturn the regulatory nightmare, created by the Dodd-Frank law, for the community banks and savings and loans that provide nearly half of all small-business loans and over three-quarters of all agricultural loans.

Maybe I’m being paranoid, but where’s the language explicitly calling for repeal of the Dodd-Frank bailout bill?


The taxpayers spend an average of $35,000 a year per employee on non-cash benefits, triple the average non-cash compensation of the average worker in the private sector. Federal employees receive extraordinary pension benefits and vacation time wildly out of line with those of the private sector. We urge Congress to bring federal compensation and benefits in line with the standards of most American employees.

Federal bureaucrats are overcompensated, so it goes without saying (though I’m still glad they said it) that costs should be contained.


We must impose firm caps on future debt… A strong economy is one key to debt reduction, but spending restraint is a necessary component that must be vigorously pursued.

Capping debt is fine. Capping spending would be far better.


The Foreign Account Tax Compliance Act (FATCA) and the Foreign Bank and Asset Reporting Requirements result in government’s warrantless seizure of personal financial information without reasonable suspicion or probable cause. …FATCA not only allows “unreasonable search and seizures” but also threatens the ability of overseas Americans to lead normal lives. We call for its repeal and for a change to residency-based taxation for U.S. citizens overseas.

Unambiguous opposition to FATCA is great, but it’s also big news that the GOP wants territorial taxation for labor income.


We call on Congress and state legislatures to enact reforms to protect law-abiding citizens against abusive asset forfeiture tactics.

This is true, but it’s too bad Republicans aren’t serious about this plank.


We oppose any carbon tax.

Good. It’s never a good idea to give politicians a new source of tax revenue.


The Republican path to fiscal sanity and economic expansion begins with a constitutional requirement for a federal balanced budget.

At the risk of being repetitive, spending caps are better.


We support the following test: Is a particular expenditure within the constitutional scope of the federal government? If not, stop it. Has it been effective in the past and is it still absolutely necessary? If not, end it. Is it so important as to justify borrowing, especially foreign borrowing, to fund it? If not, kill it.

If GOPers were serious about this part of the platform, this would put them on record to abolish 90 percent of the federal government.


Impose no changes for persons 55 or older. Give others the option of traditional Medicare or transition to a premium-support model designed to strengthen patient choice, promote cost-saving competition among providers, and better guard against the fraud and abuse that now diverts billions of dollars every year away from patient care.

To their credit (and notwithstanding Trump’s unserious approach to the issue), Republicans still embrace the right type of Medicare reform.


We applaud the Republican governors and state legislators who have undertaken the hard work of modernizing Medicaid. We will give them a free hand to do so by block-granting the program without strings.

It’s also good to see support for the right kind of Medicaid reform.


…all options should be considered to preserve Social Security. As Republicans, we oppose tax increases and believe in the power of markets to create wealth and to help secure the future of our Social Security system.

This is vacuous language, though at least it provides an indirect endorsement of personal retirement accounts. Though I don’t want “all options” on the table since that could be construed to include tax hikes.


We support reinstating the Glass-Steagall Act of 1933 which prohibits commercial banks from engaging in high-risk investment.

What?!? This is the most disappointing and economically illiterate part of the GOP platform.


…the Constitution gives [the federal government] no role in education.

True, so why don’t Republicans explicitly call for abolishing the Department of Education?

We agree with the four dissenting judges of the Supreme Court: “In our view, the entire Act before us is invalid in its entirety.” It must be removed and replaced with an approach based on genuine competition, patient choice, excellent care, wellness, and timely access to treatment.

Nice, though remember that repealing Obamacare is just the first step if you want a genuine market-based healthcare sector.


We propose to end tax discrimination against the individual purchase of insurance and allow consumers to buy insurance across state lines.

I like the latter part about breaking down the government-imposed barriers to interstate commerce, but I worry the part about tax discrimination is so vague it could be used to expand tax preferences when the real goal should be to get rid of the healthcare exclusion.


The FDA has slowly but relentlessly changed into an agency that more and more puts the public health at risk by delaying, chilling, and killing the development of new devices, drugs and biologics that can promote our lives and our health.

This is correct, but it would be nice to see specific reforms.


We commend those states that have passed Right to Try legislation, allowing terminally ill patients the right to try investigational medicines not yet approved by the FDA. We urge Congress to pass federal legislation to give all Americans with terminal illnesses the right to try.

This is a very good idea. If I ever have a deadly illness, I’ll want the freedom to roll the dice in hopes a new medicine or procedure will work.


Two grave problems undermine the rule of law on the federal level: Over-criminalization and over-federalization. In the first case, Congress and federal agencies have increased the number of criminal offenses in the U.S. Code from 3,000 in the early 1980s to more than 4,500 today. That does not include an estimated 300,000 regulations containing criminal penalties. …We urge Congress to codify the Common Law’s Rule of Lenity, which requires courts to interpret unclear statutes in favor of a defendant.

If bigwigs like Hillary Clinton can get away with violating very clear-cut national security laws because she didn’t intend to do damage to the nation, then ordinary people surely should get the benefit of the doubt as well when they inadvertently violate some complicated law or regulation.


…we oppose any form of Global Tax.

Amen. Now let’s see if Republicans put our money where their mouths are and defund pro-tax international bureaucracies such as the Organization for Economic Cooperation and Development.
Let’s wrap this up. There are more policies that could be addressed, but this column already is too long.

The bottom line is that the platform has many good policies. Heck, if I though GOP politicians actually planned to pursue the agenda outlined in the document, I might consider becoming a Republican.

But does anybody think the average Republican politician even knows what is in the GOP platform? More importantly, does anyone think that Donald Trump has any commitment to the policies in the platform?

So now perhaps you can understand why advocates of small government sympathize with Uncle Sam in this cartoon.

Is it Tweedledee and Tweedledum, or the other way around?
Posted by Rich Kozlovich at 4:50 AM