Literature and the Conservative Ideal: An Interview with Editor Mark Zunac

Recently, we talked with Mark Zunac, editor of Literature and the Conservative Ideal, which features eight essays covering the state of the academy, the conservative critical tradition, reviving the canon, and non-canonical texts (including one by yours truly on George Schuyler), as well as an introduction by Mark Bauerlein, Professor of English at Emory University and author of The Dumbest Generation.

Mark Zunac, Associate Professor of English at the University of Wisconsin-Whitewater (Marquette University Ph.D. 2008), teaches multiple levels of composition as well as early modern and Victorian British literature.  His primary research interests are "writing, revolution, and the rise of intellectual conservatism following the French Revolution."

How did your interest in literature and conservatism begin?

My interest in literature and conservatism stems in part from my general research area of the British counterrevolution during the 1790s and early 1800s. Yet having worked in higher education for nearly a decade, I have noticed with more frequency the influence of politics on the humanities, as well as on higher education generally.

My own views on it have been informed by what I see as at least hints of the French Revolution’s legacy, particularly its distortion of the concept of liberty and its rationalization of political violence and the suppression of dissent. I value the spirit of free inquiry that is embodied by a university education and am concerned that it has been hindered by antithetical interests.

What gave you the idea for Literature and the Conservative Ideal and how did it come together?

Perhaps more than anything, I have been an enthusiastic observer of the higher education culture wars, having chosen sides fairly early in my graduate career. I wanted to make a contribution, however modest, to the body of work that has done so much to articulate not only literature’s relationship to the human condition but also its recession within higher education. I have always looked to literature for its complex examination of the natural world and for its ability to elevate the human soul. It has been frustrating to see it deployed for ideological purposes and as evidence for the answers to planted questions. The spirit of inquiry that formerly characterized the study of literature has been supplanted by the aching need to deliver – not to posit or suggest - the same warmed-over truisms that are found in so many other branches of the humanities. Literature’s value as a form or high art or culture has been degraded, and the political ramifications are inescapable. This book reflects my desire to join the fray and, more selfishly, work with scholars and critics whose work I have admired. Its purpose is to explore conservatism’s various formulations within literature and to revive the quaint idea that literature has a moral dimension, thus making it an essential component of a classical liberal education. It is a point that has been lost and, for better or worse, one that has become associated with the conservative worldview.

After I read all the essays in this collection, I went back to my teaching days, and thought—syllabus!  Do you think that the book might be used in a class (perhaps similar to classes on conservative political thought that are now being offered on some campuses)?

I think that the single-author essays in particular could be of value for those seeking alternative approaches to literature and how it reflects the ideas and attitudes of a given epoch. More than anything, though, it might be used to supplement the inclusion of some of these authors in a standard literature course. Literary giants like Henry James, William Shakespeare, and Evelyn Waugh are today in many ways personae non gratae, but the psychological depth and stylistic precision of their work can further the conversation about the literary canon and the importance of artistic distinctions. Their relationship to politics per se might be tenuous, but an honest study of their work might go some way toward an appreciation of literature’s relationship to humanity rather than its service to discrete identity groups. In the same way, critical approaches to literature that elevate the text over its validation of political trends are a rejoinder to the postmodern rejection of objective values and truths. If indeed this has become a natural corollary to political conservatism, it might behoove us to include it in discussions of Western political traditions.

The charter for the Aexander Hamilton Institute for the Study of Western Civilization (AHI) begins in the following way:


A heritage . . . identifies the signposts, monuments, and ruins left behind by human beings as they sought individually and collectively to define who they are and what they aspired to be. The Alexander Hamilton Institute for the Study of Western Civilization (AHI) proceeds on the premise that the reasoned study of Western civilization, its distinctive achievements as well as its distinctive failures, will further the search for truth and provide the ethical basis necessary for civilized life. The AHI aspires to create an educational environment of the highest standards in which evidence and argument prevail over ideology and cant.

In pursuit of such goals, we study and discuss founding documents and works of history, political thought, economics, and philosophy.  How might literary works fit into the mix?

AHI’s Charter is a prime example of what has inspired me to undertake work that promotes literature as an artistic reflection of culture. The study of Great Works or Major Authors – indeed, the very idea of such things – celebrates human achievement and certain hallmarks of civilized life. Literature is so much more than its reductive identification as either a product or a condemnation of social injustice. The underside of the multicultural ethos, and by extension the cultural studies model of literary criticism, is that it relativizes those values that comprise civil society. As the Charter mentions, Western civilization has its failures. But they do not define it, and the standard line in today’s typical college venue is that there is very little to admire about the West, that its rise has been mythologized and manufactured. Great literary works aren’t limited to membership in the right demographic, however. As I mention in the book, its study necessarily privileges free inquiry, artistic beauty, and moral clarity. These values are integral to the Western tradition, and, quite simply, they are no longer given a fair hearing. Literature provides an artistic representation of a common humanity, and the critic’s role is to investigate the enduring significance of the truth it might reveal. This practice complements perfectly those efforts aimed at preserving individual freedom and liberty.

Are your colleagues receptive to the non-canonical works that you discuss in your essay, “Private Property and the Anti-Jacobin Defense of Liberty and the Nation”?  Do you teach these in your classes? 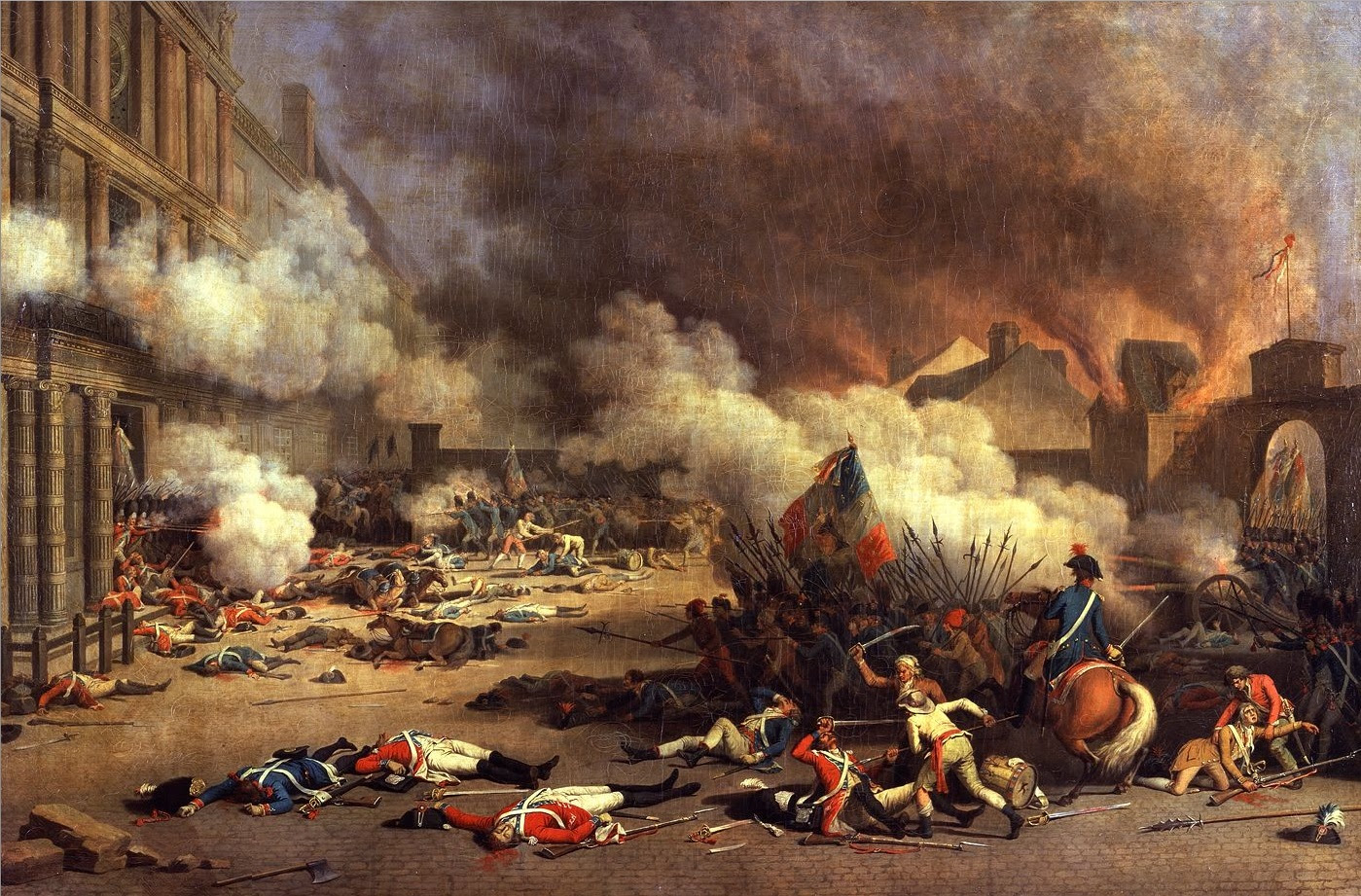 Jacques Bertaux Prise du palais des Tuileries 1793I definitely think they are open to the idea of including these works on a syllabus, though it likely wouldn’t be their own. I happen to have a supportive department and college, and my relationship with colleagues is generally collegial. I don’t consider myself too much of a renegade, although I have gotten a sense that any deviation on my part from majority opinion – and I mean vast majority – is welcomed as a refreshing change of pace. Even if I’m seen as a novelty, at least I haven’t been publicly denounced. Encouragingly, I was allowed to teach a Major Authors course on Evelyn Waugh this past spring, and I also regularly teach George Walker’s counterrevolutionary novel The Vagabond, which I discuss in the book. My impression is that these authors offer something radically different from what students would find in a typical literature course, which increasingly values literature for the degree to which it reflects institutional conceptions of diversity.

What effect do you hope the book will have?

I hope that, if nothing else, it offers a reminder that literature can have a powerful impact on individual lives and that it does not need to speak for personal pieties or serve an ideological platform. I also hope it goes some way toward a more complete and honest understanding of what the conservative worldview might entail. Its reputation on the college campus needs recovery and rehabilitation. The non-canonical authors whose worldview is espoused in their work – namely George Schuyler and the anti-Jacobins – might help cultivate this understanding. Moreover, an honest look at what they are critiquing might provide some much needed balance in the classroom and leave students asking serious questions. Lastly, by offering a fresh look into authors who have fallen out of favor, the book might revive some interest in their enduring relevance. More than anything, the book seeks to restore an appreciation for literature and its ability to explore human concerns and reflect the beauty that has been diminished by cynical worldviews and pervasive nihilism.

Literature and the Conservative Ideal is published by Rowman & Littlefield and can be purchased through the publisher, Amazon, and other outlets.  Order it for yourself, your college student, and your library!
Posted by Rich Kozlovich at 6:35 AM