The World As I See It! 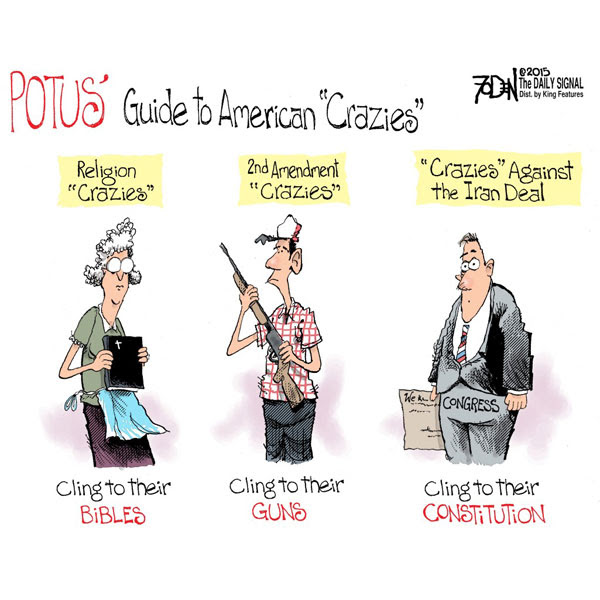 The Hypocrisy of Denver's War on Chick-fil-A - In Denver, city council members are weighing whether Chick-fil-A will be allowed to open in the Denver International Airport. Denver council member Paul Lopez “called opposition to the chain at DIA ‘really, truly a moral issue,'” according to the Denver Post, while council member Robin Kniech is alarmed about Chick-fil-A’s “corporate profits used to fund and fuel discrimination.” “Ten of the 13 [Denver city council] members attended Tuesday’s meeting, and none rose to defend Chick-fil-A, although some didn’t weigh in,” reported the Post. Chick-fil-A’s crime? Well, back in 2012—when 48 percent of Americans opposed gay marriage, according to Gallup—Chick-fil-A CEO Dan Cathy spoke out about his opposition to gay marriage, setting off a firestorm. The fact that the CEO of a company so committed to Christian values that it’s not even open on Sundays opposed gay marriage was somehow shocking…..
The Government Is Fighting to Keep $167K It Seized From Motorist - After a federal judge ordered the government return $167,000 law enforcement seized from a motorist driving through Nevada, federal prosecutors are fighting the decision. The U.S. attorney’s office in Reno, Nev., filed documents with the 9th Circuit Court of Appeals in San Francisco, Calif., earlier this month calling on the court to revisit a decision requiring the government to return cash it seized from Straughn Gorman several years ago. Gorman was never charged with a crime.  “The prosecutors simply have the financial calculus [to appeal]—either pay a six-figure attorney’s fees to Mr. Gorman or potentially win a six-figure return if they win in the ruling and prevail,” Jason Snead, a policy analyst at The Heritage Foundation, told The Daily Signal……
Why Progressives Are Wrong to Revere Margaret Sanger - Margaret Sanger is a saint in the feminist church. She is a charter member of the progressive hall of fame. Liberals revere this woman who preached “race improvement” and denounced what she called “human weeds”. Hillary Clinton glows that she is “in awe of” Sanger. She said so in 2009 upon receiving Planned Parenthood’s “highest honor” that year: its coveted Margaret Sanger Award. Likewise effusive was Nancy Pelosi when she proudly accepted the award in 2014. Speaking to Planned Parenthood a year earlier, President Barack Obama, hailed the organization founded by this racial eugenicist committed to creating a “race of thoroughbreds” and purging America’s “race of degenerates.”
Meet the Man Challenging John Boehner's Speakership - The man who made the move to overthrow House Speaker John Boehner is back home now, shaking the hands of war veterans. He grips the hands for so long, it’s like he is holding on for dear life. As much as he is there for them, to reassure the veterans that their benefits are coming, they are here for him, to stand by a leader facing a consequential moment. This is what happens when you risk it all—friends, money, power, respect—in the name of some greater purpose…
Ann Coulter on Why Immigration Is the Only Issue That Matters - Political commentator Ann Coulter believes that immigration is the most important issue facing America today. If we don’t get it right, she says, debates over economics, foreign policy, and other issues just won’t matter. Coulter makes the case in her new book, “Adios, America,” that it has been the goal of liberals for decades to fundamentally transform America by bringing in millions of immigrants from third-world countries to build their voting base. As those familiar with Coulter know, she speaks her mind. Watch the interview to find out what she told us.

RIP GOP  - The Republican Party has most often come to power at times of crisis, starting with slavery. But in the great moral crisis now, the Republican Party finds itself infested with charlatans, conmen, louts and Donald Trump. The Republican Party of 2015 more often than not responds to the fierce urgency of now with palms outstretched, waiting for the highest bidder to purchase its policy positions, while running from any fight that might get it criticized by a Washington press corps increasingly composed of former leftwing activists masquerading as objective journalists.

After eight years of broken promises and Republican collaboration in Barack Obama's agenda to expand government, the Grand Old Party has been confronted with a moral evil in Planned Parenthood. Undercover, unedited videos show Planned Parenthood officials laughing about harvesting organs from babies. The CEO of StemExpress, a business that was willing to pay extra for 50 human baby livers a week, bragged on film about her "socially liberal" sister advising Republican Speaker John Boehner on health care.  Boehner's response has been to call for more investigations while keeping federal dollars flowing to Planned Parenthood. Boehner and Mitch McConnell have kept federal dollars flowing to all areas of Obama's agenda. From Obamacare to the IRS to Obama's immigration expansion, the Republicans have chosen not to use any of their constitutional powers to restrain executive overreach. Instead, they will let judges sort through everything…….


At War with Reality - Nothing equals the insane attempt by the leftist crazies to completely eliminate the distinction between men and woman. Characterizing the opposition as insane is a favorite tactic of the Left. To question their latest fatwa is for them an indicator of mental derangement on the part of the inquirer. But in case you haven’t noticed, within in the halls of academia, which once passed as the place for rational inquiry and analysis, the real crazies are hard at work introducing the equivalent of jabberwocky. Even language is supposed to adjust to the current insanity of those seeking “gender equality.”


Obama, Bush, Clinton: Secret Agents- I have thought for a while that a case could be made that Obama was really a secret conservative, showing America what would happen if the “progressive” agenda were ever put in place and thereby weaning us off it forever. My friend Noemie Emery, an exceptionally astute observer of American political history, emailed, “All politicians act like secret agents, in the pay of the opposite side.” As I thought about it, it seemed to me her observation had special applicability to the president, Jeb Bush, and Hillary Clinton, though I’d certainly not rule out a wider field…. My Take – Interesting take article except it seems to me the headline and the first paragraph seem inappropriate for the context. RK


The Hard Work of Defending Civilization- By now, everyone knows about the three American heroes -- two of them off-duty military personnel -- who foiled a terrorist attack on a packed Amsterdam-to-Paris train. Armed with an AK-47, a handgun, nine magazines of ammunition and a box cutter, the lone-wolf terrorist opened fire. Most passengers ducked for cover. But the Americans “immediately took action,” as The Washington Post reported, citing the firsthand account of a British businessman. They rushed the gunman--a Moroccan man tied to “radical Islamist movements,” according to French officials -- subdued him by force and then began treating the wounded. “We just did what we had to do,” said Alek Skarlatos, an Army National Guardsman and veteran of Afghanistan. U.S. Airman Spencer Stone, who was stabbed during the attack, said the jihadist “seemed like he was ready to fight to the end.” But Stone added:“So were we.” This is one of those microcosm moments that serve as a metaphor for much larger truths. First, we are at war. The enemy is real. It is tenacious. And it wants to kill those who oppose its death creed…..My Take – This article outlines the Bretton Woods reality which has existed since 1944. That’s coming to an end. I will have more on this in the near future. RK


Lawfare and Gay Marriage - A Colorado appellate court ruled earlier this month that Jack Phillips, the evangelical owner of Masterpiece Cakeshop in suburban Denver, had violated the rights of a gay couple when he declined on religious grounds to design and bake a custom wedding cake for them in 2012-- two years before same-sex marriage was even legal in the state. (The couple had actually married in Massachusetts.) The court ordered Phillips to“take remedial measures, including comprehensive staff training” on how conscientious objection must give way to anti­discrim­ination law in these situations, and to“file quarterly compliance reports” with the state on this mandated retraining.
Posted by Rich Kozlovich at 5:55 PM