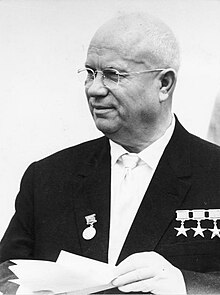 The twentieth congress of the Communist Party of the Soviet Union assembled in Moscow in the Great Hall of the Kremlin on February 14th, 1956. It was the first since the death of Josef Stalin in 1953, but almost nothing was said about the dead leader until, in closed session on the 25th, 1,500 delegates and many invited visitors listened to an amazing speech by Nikita Khrushchev, First Secretary of the party, on ‘The Personality Cult and its Consequences’.


Khrushchev denounced Stalin....and the crimes he had perpetrated, including the execution, torture and imprisonment of loyal party members on false charges. He blamed Stalin for foreign policy errors, for the failings of Soviet agriculture, for ordering mass terror and for mistakes that had led to appalling loss of life in the Second World War and the German occupation of huge areas of Soviet territory.


Khrushchev’s audience heard him in almost complete silence, broken only by astonished murmurs. The delegates did not dare even to look at each other as the party secretary piled one horrifying accusation on another.....At the end there was no applause and the audience left in a state of shock....... Now the past was being shattered.....Others have pointed out.... it tarred other party leaders with the Stalinist brush, to the ostentatiously repentant Khrushchev’s advantage. It deflected blame from the party and the system on to Stalin’s shoulders..... - See more at: