I recently appeared on CNBC to talk about everyone’s favorite government agency, those warm and cuddly folks at the IRS..

Our tax system is a dysfunctional mess, but you’ll notice that I mostly blamed politicians. After all, they are the ones who have unceasingly made the internal revenue code more complex,
starting on that dark day in 1913 when the income tax was approved.

But I don’t want to give the IRS a free pass. 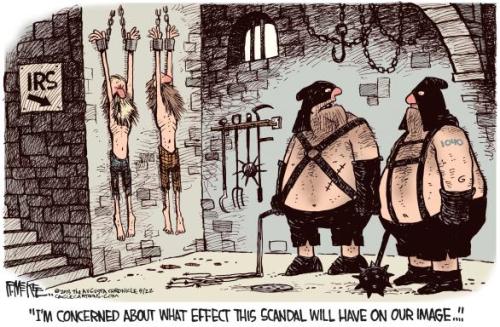 I’ve cited IRS incompetence and misbehavior in the past, most notably when discussing political bias, targeted harassment, and other shenanigans.

And, as illustrated by these five examples, we can always cite new evidence.  Such as lack of accountability.

…a new report from the Cause of Action Institute reveals that the IRS has been evading numerous oversight mechanisms, and it refuses to comply with laws requiring it to measure the economic impact of its rules. Congress has passed several laws, including the Regulatory Flexibility Act and the Congressional Review Act, that require agencies to report on their rules’ economic impact to lawmakers and the public. …These good-government measures are meant to ensure unelected bureaucrats can be checked by the public. …the IRS has made up a series of exemptions that allow it to avoid basic scrutiny. The agency takes the position that its rules have no economic effect because any impact is attributable to the underlying law that authorized the rule.

Private debt collectors cost the Internal Revenue Service $20 million in the last fiscal year, but brought in only $6.7 million in back taxes, the agency’s taxpayer advocate reported Wednesday. That was less than 1 percent of the amount assigned for collection. What’s more, private contractors in some cases were paid 25 percent commissions on collections that the I.R.S. made without their help…the report stated, “the I.R.S. has implemented the program in a manner that causes excessive financial harm to taxpayers and constitutes an end run around taxpayer rights protections.”

Such as rewarding scandal.

The Internal Revenue Service (IRS) issued more than $1.7 million in awards in fiscal 2016 and early fiscal 2017 to employees who had been disciplined by the agency, a Treasury Department watchdog said. “Some of these employees had serious misconduct, such as unauthorized access to tax return information, substance abuse and sexual misconduct,” the Treasury Inspector General for Tax Administration (TIGTA) said in a report made public this week. …in fiscal 2016 and early fiscal 2017, the IRS had given awards to nearly 2,000 employees who were disciplined in the 12 months prior to receiving the bonus.

By the way, the IRS has a pattern of rewarding bad behavior.
Such as pursuing bad policy.

…for 35 years the Internal Revenue Service has exempted itself from the most basic regulatory oversight. …Tax regulations (like all regulations) have exploded in recent decades, and of course IRS bureaucrats impose their own policy judgments. The IRS has in recent years unilaterally decided when and how to enforce ObamaCare tax provisions, often dependent on political winds. In 2016 it proposed a rule to force more business owners to pay estate and gift taxes via a complicated new reading of the law. …Secretary Steve Mnuchin’s Treasury…department is inexplicably backing IRS lawlessness with a string of excuses.

Again, this is not the first time the IRS has interfered with congressional policy.

Such as stifling political speech. 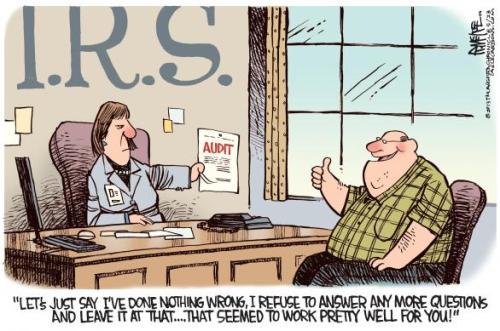 The Internal Revenue Service infamously targeted dissenters during President Obama’s re-election campaign. Now the IRS is at it again. Earlier this year it issued a rule suppressing huge swaths of First Amendment protected speech. …The innocuously named Revenue Procedure 2018-5 contains a well-hidden provision enabling the Service to withhold tax-exempt status from organizations seeking to improve “business conditions . . . relating to an activity involving controlled substances…” The rule does not apply to all speech dealing with the listed substances, only that involving an “improvement” in “business conditions,” such as legalization or deregulation. …This is constitutionally pernicious viewpoint discrimination.

In other words, the bureaucrats didn’t learn from the Lois Lerner scandal.

Now that I’ve hopefully convinced people that I’m not going soft on IRS malfeasance, let’s look at the budgetary issue that was the focus of the CNBC interview.

Is the IRS budget too small? Should it be increased so that more agents can conduct more audits and extract more money?

Both the host and my fellow guest started from the assumption that the IRS budget has been gutted. But that relies on cherry-picked data, starting when the IRS budget was at a peak level in 2011 thanks in part to all the money sloshing around Washington following Obama’s failed stimulus legislation.
Here are the more relevant numbers, taken from lines 2564-2609 of this massive database in the OMB’s supplemental materials on the budget. As you can see, IRS spending – adjusted for inflation – has nearly doubled since the early 1980s.

In other words, we shouldn’t feel sorry for the IRS and give it more money.

To augment these numbers, I made two simple points in the above interview.
The latter point is especially important because we could dramatically improve compliance while also shrinking the IRS if we had a simple and fair system such as the flat tax.

Last but not least, here’s a clip from another recent interview. I explained that the recent shutdown will be used as an excuse for any problems that occur in the near future.

Standard operating procedure for any bureaucracy.

P.S. My archive of IRS humor features a new Obama 1040 form, a death tax cartoon, a list of tax day tips from David Letterman, a Reason video, a cartoon of how GPS would work if operated by the IRS, an IRS-designed pencil sharpener, two Obamacare/IRS cartoons (here and here), a collection of IRS jokes, a sale on 1040-form toilet paper (a real product), a song about the tax agency, the IRS’s version of the quadratic formula, and (my favorite) a joke about a Rabbi and an IRS agent.
Posted by Rich Kozlovich at 10:21 AM