What Motivates the Left, Disdain for the Rich or a Desire to Help the Poor?

Editor's Note:  While I like the idea of open markets, the real world doesn't really work that way. Otherwise, why then to they need to make trade agreements?  RK)


I’m happy to discuss theory when debating economic policy, but I mostly focus on real-world evidence.

That’s because my friends on the left always have a hard time answering my two-question challenge, which simply asks them to name one success story for big government.

They usually point to Sweden and Denmark, but get discouraged when I point out that those nations became rich when government was relatively small. 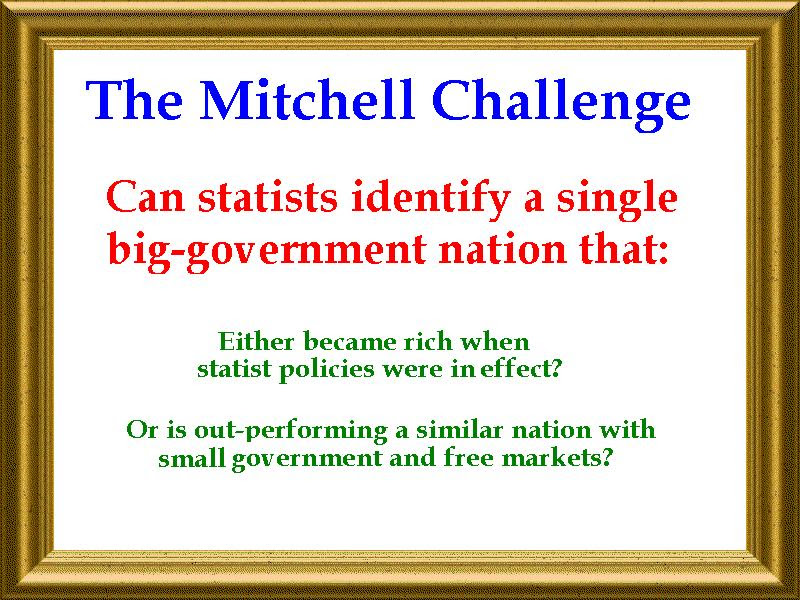 And I’m embarrassed to admit that some of my fellow economists once thought that communist nations grew faster than capitalist nations.

But let’s not digress. I raise this topic because there are many critics of capitalism who admit that free markets generate more wealth, but they assert that society would be better off if incomes were lower so long as rich people suffered more than poor people.

This strikes me as morally poisonous. But it also gives me an opportunity to cite a new study from the International Monetary Fund that allows us to further analyze this issue.

The IMF report starts by noting that globalization (free trade, liberalization, etc) has been good for global prosperity.

Over the course of the last decades the world economy has witnessed rapid integration. Most countries have opened up their economies and experienced an unprecedented rise in the flow of goods and capital across borders. This phenomenon – now widely known as economic globalization – was coincident with rising living standards in a large number of countries. Many developing countries have experienced episodes of strong economic growth and substantial poverty reduction as they integrated their economies with the rest of the world.

It is good news, but those who fixate on inequality are worried.

In other words, rich people are getting richer at a faster pace.

This phenomenon is captured in these two charts, which show that globalization is associated with more growth and more inequality.

But what’s important is that poor people also are getting richer.

Consider, for example, the remarkable data I shared about China. Income inequality increased at the same time that poverty dramatically declined.

And those results seem to hold for the rest of the world, especially in developing nations.

So now let’s look at the most important chart from the IMF study, which shows that all income groups enjoy more prosperity with globalization.

Yes, rich people benefit the most, so official inequality numbers will increase.

But put yourself in the shoes of a poor person. Would you be willing to forego your additional income in order to deny additional income for a rich person? I suspect the vast majority of poor people would think that’s a crazy question.

But, as Margaret Thatcher pointed out, there are plenty of folks on the left who think that’s a perfectly reasonable position. Including, incidentally, some of the people at the IMF.

Posted by Rich Kozlovich at 4:08 AM