Moves to Disqualify Partisan Judge Amy Berman Jackson
(Washington, D.C., December 11, 2017). Larry Klayman, the founder of both Judicial Watch and now Freedom Watch (FW) and FW's current chairman and general counsel, having previously filed suit designed to have the Department of Justice remove Special Counsel Robert Mueller, and replace him and his conflicted prosecutorial staff with an ethical and honest special counsel, announced today that he has moved to disqualify the presiding judge over the case, the Honorable Amy Berman Jackson.

As set forth in the visually embedded pleadings below, Judge Jackson is not only highly partisan, having been nominated by former President Barack Obama and has exhibited a deep seated extra-judicial prejudice in favor of Mueller and against President Donald Trump in the prosecution of Paul Manafort and Rick Gates, over which she is presiding, but she also has a manifest conflict of interest.

Klayman had this to say upon filing the motion to recuse and/or disqualify:

"It is incumbent upon Judge Jackson to do the ethical and right thing as her colleague the Honorable Rudolph Cantreras correctly did in the Flynn prosecution, and recuse herself from this case. The reasons for this are detailed and supported in the motion, which we urge all to review thoroughly. As the founder of both Judicial Watch and Freedom Watch, I believe strongly in having a fair and impartial judiciary, in particular with regard to a matter as serious as this.

Go to www.freedomwatchusa.org to sign the petition to remove Special Counsel Mueller and to contribute to Freedom Watch. While other public interest groups, like Judicial Watch, spend their resources and time mostly just filing Freedom of Information Act cases to get documents, Freedom Watch brings hard-hitting lawsuits to obtain justice.

We are unique and what Freedom Watch is now doing is what I used to do when I founded and ran Judicial Watch. We need your urgent support before the Trump presidency is destroyed and the nation goes down in flames. Go to www.freedomwatchusa.org to support this urgent effort to remove Robert Mueller as special counsel! 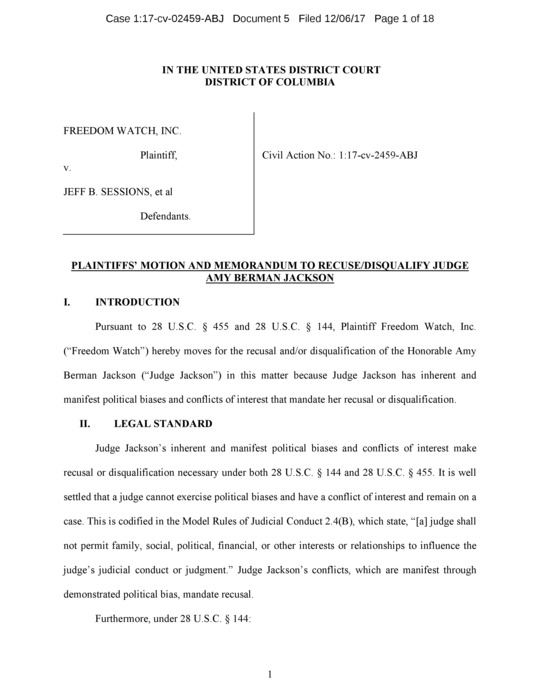 Filed Motion to Disqualify
Posted by Rich Kozlovich at 5:18 AM