What the War Over Jerusalem is Really About

Hamas has announced that President Trump’s recognition of Jerusalem as the capital of Israel has opened the “gates of hell.” Its Muslim Brotherhood parent has declared America an “enemy state.” 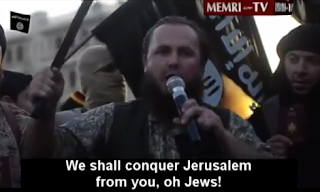 The Arab League boss warned that the Jerusalem move “will fuel extremism and result in violence.” The Jordanian Foreign Minister claimed that it would “trigger anger” and “fuel tension.”

“Moderate” Muslim leaders excel at threatening violence on behalf of the “extremists”.

The Organization of Islamic Cooperation (OIC) warned that recognizing Jerusalem will trigger an Islamic summit and be considered a "blatant attack on the Arab and Islamic nations."

The last time the OIC was this mad, someone drew Mohammed. And wasn’t stoned to death for it.

According to the Saudi ambassador, it will “heighten tensions”. The Deputy Prime Minister of Islamist Turkey called it a “major catastrophe”. And the leader of the largest Muslim country in Europe, France's Emmanuel Macron "expressed concern" that America will “unilaterally recognize Jerusalem."

PLO leaders and minions meanwhile made it quite clear that now the dead peace process is truly dead.

The Palestinian Authority’s boss warned that recognizing Jerusalem will “destroy the peace process”. The PLO’s envoy in D.C. threatened that it would be the “final lethal blow” and “the kiss of death to the two-state solution”. A top PA advisor claimed it “will end any chance of a peace process.”

A day later, the peace process is still as alive and as dead as it ever was.

Since the chance of a peace process is about the same as being hit by lightning while scoring a Royal Flush, that “chance” doesn’t amount to anything. The peace process has been deader than Dracula for ages. And even a PLO terrorist should know that you can’t threaten to kill a dead hostage.

The only kiss of death here came from Arafat.

Peace wasn’t killed though. It was never alive. Because a permanent peace is Islamically impossible.

Habash isn’t just the bigwig of Islamic law, he’s also the Islamic adviser to the leader of the Palestinian Authority. And Abbas, the terror organization’s leader, was there when Habash made his remarks.

Previously Habash had declared that the Kotel, the Western Wall of the fallen Temple, the holiest site in Judaism, “can never be for non-Muslims. It cannot be under the sovereignty of non-Muslims.”

While the official warnings from the Palestinian Authority, the Arab League and assorted other Islamic organizations have claimed that recognizing Jerusalem threatens the non-existent peace process, Habash had in the past had made it quite clear that the issue wasn’t land, it was Jihad.

“The struggle over this land is not merely a struggle over a piece of land here or there. Not at all. The struggle has the symbolism of holiness, or blessing. It is a struggle between those whom Allah has chosen for Ribat and those who are trying to mutilate the land of Ribat," Habash had declared.

The sense of Ribat is that the Jihadists may not yet be able to win a definitive victory, but must maintain their vigilance for the ultimate goal, which a Hadith defines as performing Ribat “against my enemy and your enemy until he abandons his religion for your religion."

That is what’s at stake here. 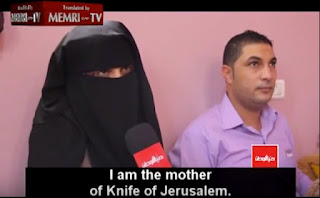 There can be no peace in a religious war. Nor is there anything to negotiate.

There’s an extremely thin line in Islamic theocracy between politics and religion. But what Habash is really saying is that there might be room to negotiate how many times a week the garbage truck comes to pick up the trash, but not who gives him the orders. Islamic supremacism is non-negotiable.

The Supreme Sharia judge warned Trump that moving the embassy is “a declaration of war on all Muslims.” Why all Muslims? Because the “Palestinians” are a myth. Islamic conquests are collective.

And it’s not as if any of the Muslim leaders disagree.

Why is Jerusalem their business? It’s not empathy for the “Palestinians”. Kuwait ethnically cleansed huge numbers of them. They aren’t treated all that much better in other Arab Muslim countries.

It’s not about them. The Muslim settlers in Israel are just there as “Ribat”. They’re the frontier guard of the Islamic conquest. Much like the Sharia patrols in the No-Go Zones of Europe or the Jihadists in Kashmir, the Rohingya in Burma and all the other Islamic Volksdeutsche variants of occupying colonists.

Sunni may fight Shiite. Muslim countries, tribes and clans may war with each other. But the land they’re fighting over belongs to all of them collectively.

It can never belong to non-Muslims. That is the essence of Islam where conquest is religion.

That’s true of Jerusalem. And of the entire world.

That is what is truly at stake in the war over Jerusalem. When countries refuse to move their embassies to Jerusalem, they are submitting to Sharia law and Islamic supremacism. The issue at stake is the same one as drawing Mohammed. It’s not about a “piece of land”. It’s about the supremacy of Islam.

Refusing to move the embassy doesn’t prevent violence. Islamic terrorism continues to claim lives in Jerusalem. And Islamic violence has been a constant before Israel liberated Jerusalem or before there was even a free Israel. The Arab League, the Jordanians, the Saudis and the rest of the gang aren’t promising an end to the violence. Instead they warn that if we don’t obey, it will grow worse.

President Trump made the right decision by refusing to let our foreign policy be held hostage. We don’t win by giving in to terrorists.

We win by resisting them. Or else we’ll have to live our lives as hostages of Islamic terror. 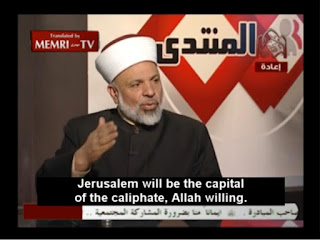 Jerusalem is a metaphor. Every free country has its own Jerusalem. In America, it’s the First Amendment. Our Jerusalem is not just a piece of land, it’s a value. And the Islamic Jihad seeks to intimidate us into giving it up until, as the Hadith states, we abandon our religion for Islam.

Moving the embassy to Jerusalem will do much more for America than it will for Israel.

The Israelis already know where their capital is. We need to remember where we left our freedom. Islamic terrorists win when they terrorize us into being too afraid to do the right thing.

President Trump sent a message to the terrorists that America will not be terrorized.